Use iperf for quick and easy network tests

Being able to quantify latency in terms other than millisecond response time is important when determining the quality of a network. One tool that can help administrators do just that is iperf.

Being able to quantify latency in terms other than millisecond response time is important when determining the quality of a network. One tool that can help administrators do just that is iperf.

Iperf is an incredibly easy-to-use free network tool to measure the performance of a system’s network interface. Iperf works as an on-demand client and server test. How this works is that one system runs the iperf server over a specified port (TCP 5001 is the default) and another system functions as a client running the iperf client. The binaries are the same, and there is an option to have the role of client or server, so the roles can easily be reversed if necessary. Once the basic test information is entered, a quick test is performed to quantify the quality of the network connection between the two systems. I had a chance to use the GUI version, which is a JAVA applet called JPerf, which I will show in this blog. Figure A below shows the initial configuration of iperf to be run as a client or server.
Figure A

Iperf’s main objectives are to measure signal jitter and datagram loss and to provide a speed for the network connection between the two hosts. In measuring the connection speed, the default value is measured in kilobits per second, but it can also be measured in megabits and gigabits. I had an opportunity to use iperf on a system that was on a somewhat busy network and was moved to a remote network over a router through the Internet. I knew my connectivity to the remote host would be less, but iperf allowed me to quantify it. Before the system was relocated to the remote network, I ran an iperf command from a local client on a 10-Megabit network connection. The client result is shown below in Figure B.
Figure B 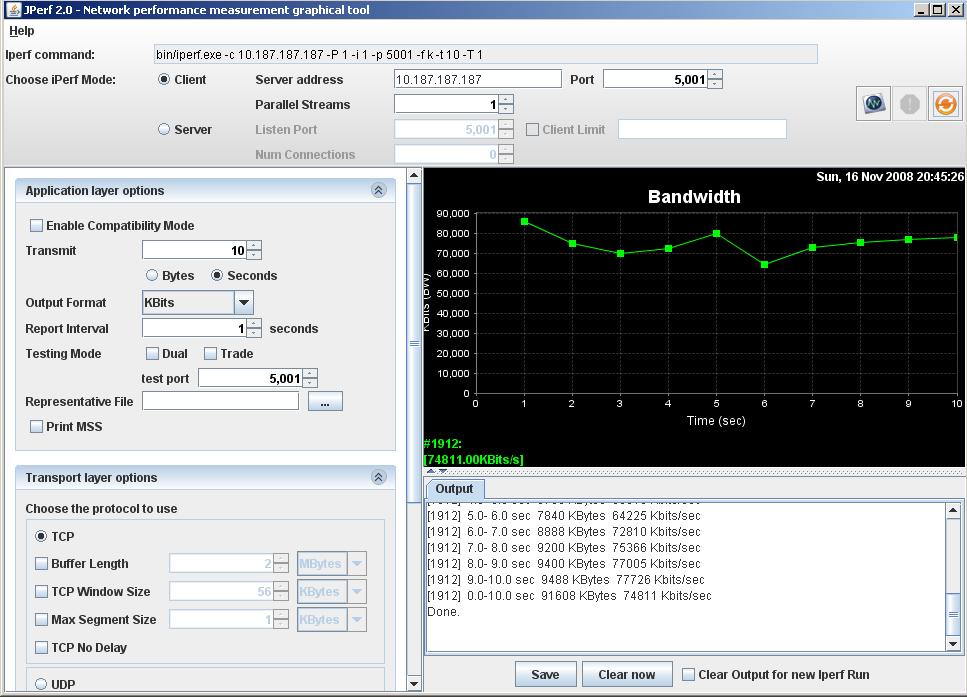 This client run of iperf shows a connection of 74811 Kbits/s, which is close to the advertised speed of the 10-Megabit network that I was on in the local office. Once the system was relocated, the speed was substantially different. On the remote network, the performance clocked in at only 300 Kbits/s. As a validation point, the number on the iperf client and iperf server are very close; in my tests they varied by only 1 or 2 kilobits per second.

Having a handy tool to quantify network speed is critical, as well as something that is network platform independent. Iperf is quite the handy tool and is a free download from SourceForge.