The IT department of 2015 will have fewer full-time staff members, will hire more consultants, and will focus on software, mobile, and the cloud. 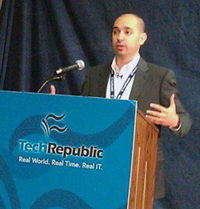 I kicked off the annual TechRepublic Live 2011 event on Wednesday by asking the question, “What will the IT dept will look like in 2015?” (Right, photo credit: Deb Shinder).

My big takeaway was that the oversized, centralized IT department of 2001 is a relic that’s never coming back and IT pros need to prepare for the decentralized IT reality of the future where companies are going to keep fewer IT pros on staff, hire more consultants, and focus their IT resources on software, the cloud, and mobile devices (which will eventually become fully functioning PCs).

A decade ago, there was a lot of new stuff that needed to be set up — ethernet networks, directory servers, mail servers, company laptops — and a lot of baby boomers who still needed helped transitioning into a computerized workplace. Those days are long gone.

Most of these technologies run themselves today and don’t require a lot of time from IT pros to deploy them and keep them running. IT pros also spend a lot less time doing repairs, maintenance, and end user support. Replacement is the new support. In 2015, employees will just swap out their malfunctioning laptop, smartphone, or tablet to IT and immediately get a replacement device that will connect to the private cloud and/or public cloud and instantly download the user’s apps, settings, and data.

The cloud (private and public) will also transform provisioning servers and setting up data centers from a month-long task to a matter of minutes with a few clicks in the web browser. The real work won’t be setting up the servers any more, it will be all about choosing the right applications to deploy and putting the right plans in place to help the organization streamline business processes.

As such, I reiterated what I wrote earlier this year that the future of IT is going to boil down to three types of jobs:

Let’s face it, all but the largest enterprises would prefer to not to have any IT professionals on staff, or at least as few as possible. It’s nothing personal against geeks, it’s just that IT pros are expensive and when IT departments get too big and centralized they tend to become experts at saying, “No.” They block more progress than they enable. As a result, we’re going to see most of traditional IT administration and support functions outsourced to third-party consultants. This includes a wide range from huge multi-national consultancies to the one person consultancy who serves as the rented IT department for local SMBs. I’m also lumping in companies like IBM, HP, Amazon AWS, and Rackspace, who will rent out both data center capacity and IT professionals to help deploy, manage, and troubleshoot solutions. Many of the IT administrators and support professionals who currently work directly for corporations will transition to working for big vendors or consultancies in the future as companies switch to purchasing IT services on an as-needed basis in order to lower costs, get a higher level of expertise, and get 24/7/365 coverage.

Most of the IT workers that survive and remain as employees in traditional companies will be project managers. They will not be part of a centralized IT department, but will be spread out in the various business units and departments. They will be business analysts who will help the company leaders and managers make good technology decisions. They will gather business requirements and communicate with stakeholders about the technology solutions they need, and will also be proactive in looking for new technologies that can transform the business. These project managers will also serve as the company’s point of contact with technology vendors and consultants. If you look closely, you can already see a lot of current IT managers morphing in this direction.

By far, the area where the largest number of IT jobs is going to move is into developer, programmer, and coder jobs. While IT used to be about managing and deploying hardware and software, it’s going to increasingly be about web-based applications that will be expected to work smoothly, be self-evident, and require very little training or intervention from tech support. The other piece of the pie will be mobile applications — both native apps and mobile web apps. As I wrote in my article, We’re entering the decade of the developer, the current changes in IT are “shifting more of the power in the tech industry away from those who deploy and support apps to those who build them.” This trend is already underway and it’s only going to accelerate over the next decade.

Of course, this is a bit oversimplified and there are a lot of jobs that aren’t going to completely disappear — network administrators and DBAs, for example — they’ll just become specialists that are mostly employed by service providers like IBM and Amazon AWS. But, there’s going to be a lot less of them. Some specialists, such as security experts, will transition almost exclusively to consultancies, because only the biggest companies will be able to afford to have one of them on staff full-time.

In my TR Live presentation, I also added another hot job to keep an eye on over the next decade: big data analysts, or data scientists. These analysts take the mountains of data that companies now have at their fingertips and organize it, curate it, and ask the right questions about it, in order to yield insights that can lead a company to make better decisions and to make important course-corrections.

For further reading, I encouraged the TR Live participants to take a look at Marc Andressen’s article “Why Software is Eating the World” because the rise of software is ultimately the force that is driving a lot of the changes that we discussed.

Delivered Weekdays
Sign up today
Share: What the IT department will look like in 2015
By Jason Hiner
Jason Hiner is Editorial Director of CNET and former Editor in Chief of TechRepublic. He's co-author of the book, Follow the Geeks.