Greg Shultz shows you a couple of the Windows 8 apps he has found that he thinks provide a great techy experience.

Well, we are finally here – Windows 8 launch week! The Microsoft Windows 8 operating system is a hybrid of a touch- based environment and the good old desktop environment that we have all come to know and love (or hate, as the case may be). And while many would choose to claim that the main focus of Windows 8, with its new Start Screen, is all about touch, I hope that after reading some of my recent articles you really understand that the Start Screen is equally suited to desktop-based, keyboard and mouse users.

As you may have noticed, the majority of my Windows 8 articles over the last year have focused on the new and improved desktop features of Windows 8. I really haven’t delved into any of the Windows 8 apps that populate the lion’s share of the Start Screen. It’s not that I haven’t been using any of them, because I have.

As of this writing, there are around 4500 apps in 20 categories in the Windows Store and while many of them are really good, a lot of them are essentially half-baked. Microsoft is promising that on October 26th, when Windows 8 launches and the Windows Store officially opens, we’ll find a plethora of new apps to choose from. I hope so.

Now, don’t get me wrong and I know that there are already a number of beautifully crafted third-party Windows 8 apps, such as USA Today, StumbleUpon, and Google just to name a few, as well as Microsoft’s own built-in apps. It’s just that as desktop user, I have been on the lookout for Windows 8 apps that essentially provide desktop oriented functionality. This means that I have mainly been scouting the Tools, Productivity, and Security categories in the Windows Store. So far I have found a couple of winners as well as a couple of wannabes that I hope will get more finely tuned.

In this blog post, I am going to show you a couple of the Windows 8 apps that I have found that I think provide a great techy experience. Of course, my choices won’t suite everyone’s tastes and with the large number of apps now in the Windows Store, I couldn’t possibly hope to investigate/cover them all. As such, I invite you to post your list of favorite tech-based Windows 8 apps in this article’s Discussion Area. By getting started now, we’ll be able to readily track the evolution of the tech-based Windows 8 apps as we move into the future.

Ping from Jujuba Software, shown in Figure A, lets you test TCP/IP connection quality between your computer and servers both on local network and the Internet. However, it is important to keep in mind that this utility actually establishes TCP/IP connection and exchanges data with the server to measure packet loss percentage and round-trip time. It does not use ICMP. As such, this tool shouldn’t be considered as a replacement for the standard Windows Ping command.

Just enter in a host name and click the play button and you will see a dynamic graphical display of the round-trip time. It also allows you to ping several hosts at the same time. The process can run continually in the background and can be paused or restarted at any time. You can even email the results at a click of a button.

Ping is Free, runs on x86, x64, and ARM processors, and can be found in the Tools section of the Windows Store. 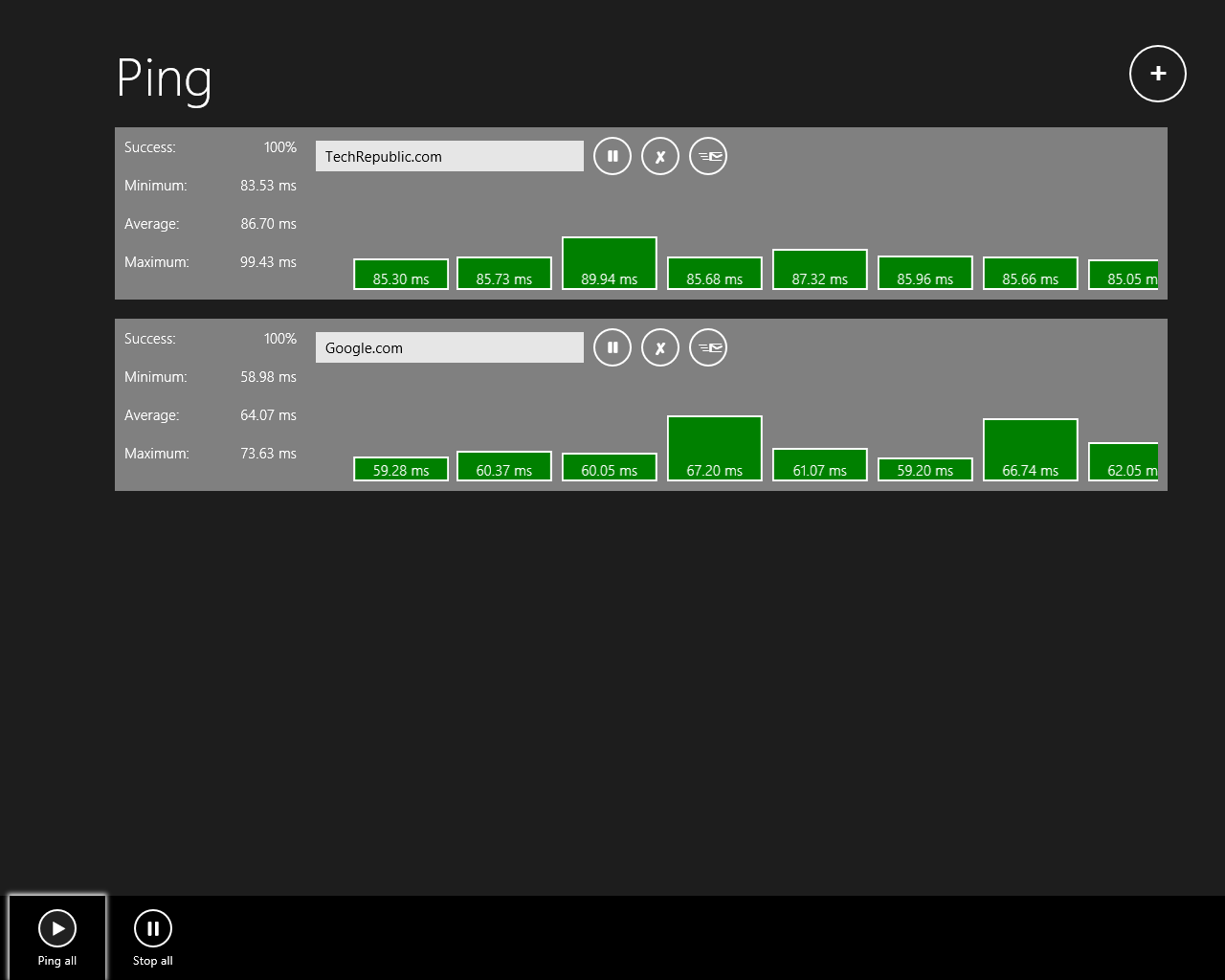 This Ping app has a great dynamic graphical display.

Have you ever opened up Computer and noticed that the amount of free space on your hard disk is slowly disappearing? If so, chances are that you wondered where all the space has gone. Which folders are using up all the hard disk space? Of course, you can embark on a folder analysis expedition in which you right click on each folder, select the Properties command, and check the Size report on the General tab. However, as you can imagine this would be a time consuming operation as you’d have to check each folder individually and manually keep track of the size reports.

TreeSize Touch, from JAM Software, offers the basic functions of its older siblings and provides you with a very nice analysis of your disk space usage. Keep in mind that even though this product incorporates the word touch in its name, it works great with a mouse.

In addition to your hard disk, TreeSize Touch also works on removable media (such as SD cards or USB flash drives). The beautiful user interface, shown in Figure B, can display disk space usage according to various criteria:

TreeSize Touch is free, runs on x86, x64, and ARM processors, and can be found in the Tools section of the Windows Store. 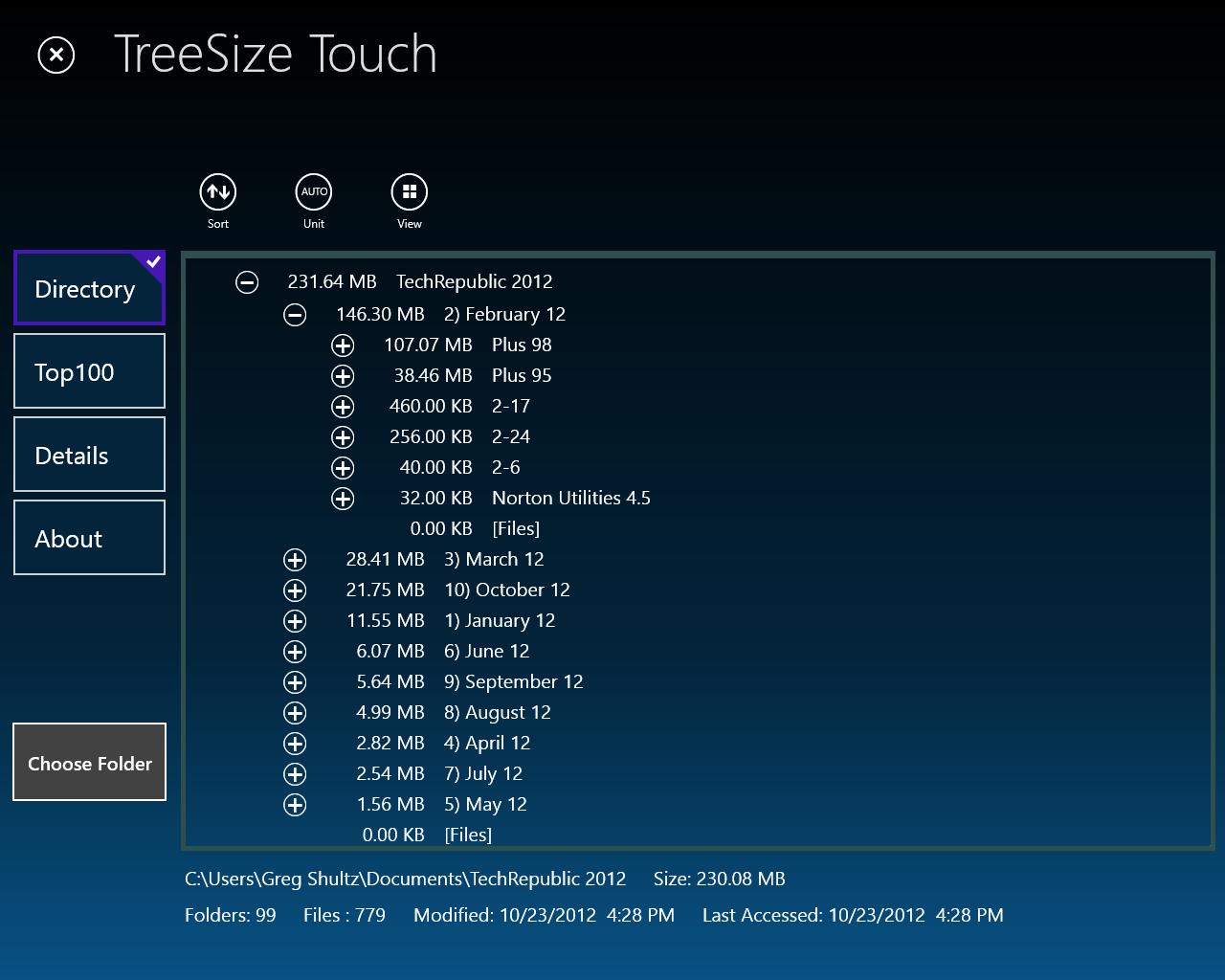 If you regularly use Remote Desktop to connect to multiple systems on your network, you will be very interested to learn about the Remote Desktop app from Microsoft, shown in Figure C. This tool is designed to provide you with a centralized location to store and launch all of your regularly accessed Remote Desktop connections.

Once you connect to a remote system, the app adds a shortcut tile to the interface. To connect at a later date, just click the tile. Keep in mind that the Remote Desktop app doesn’t support multiple monitors at this time, but chances are good we will see some improvements with the Remote Desktop app now that Windows 8 is being released.

Remote Desktop is free, runs on x86, x64, and ARM processors, and can be found in the Productivity section of the Windows Store. 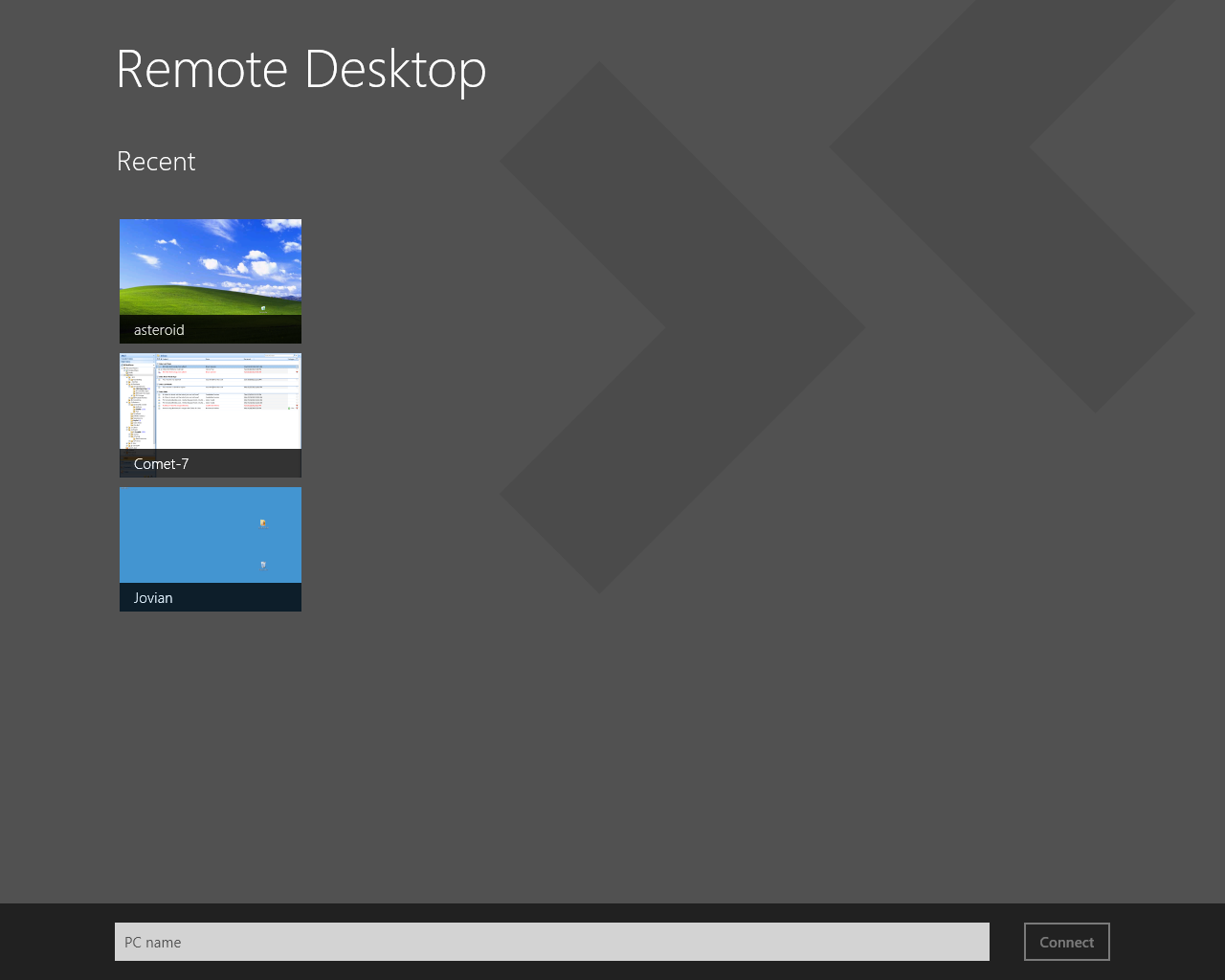 To connect at a later date, just click the tile. Keep in mind that the Remote Desktop app doesn’t support multiple monitors at this time, but chances.

Share: Windows 8 Apps designed for the tech savvy
By greg shultz
My first computer was a Kaypro 16 \"luggable\" running MS-DOS 2.11 which I obtained while studying computer science in 1986. After two years, I discovered that I had a knack for writing documentation and shifted my focus over to technical writing.