If you could collect your Gmail, Hotmail, Yahoo mail, and corporate messages into a single in-box, would you switch?

If you could collect your Gmail, Hotmail, Yahoo mail, and corporate messages into a single inbox, would you switch? The convenience of a universal email inbox is what gives Yahoo's offline, open source, cross-platform Zimbra Desktop its appeal. Then there are the other tools to tag and search messages that elevate the Webmail experience beyond what your POP and IMAP services may offer on their own. However, for many, Zimbra's ambitions, abilities and the sticky tangle of its distribution will keep it an interesting experiment, but not yet a stand-alone replacement.

While Zimbra Desktop is available to anyone as a free download, the Zimbra team really had its existing users in mind as the chief beneficiaries of this release. The majority of Zimbra's 43 million paid customers come through businesses that are especially drawn to its collaboration tools (like sharing entire address books, documents, and inboxes) and which typically use Zimbra's back-end server in place of the Microsoft Exchange Server. Zimbra's online inbox, and now its offline desktop app, take on the role of the Outlook inbox. As with Outlook, the organisation will assign the email address. However, it also has an open source following of people who run the server and desktop app to get these sharing capabilities for free. 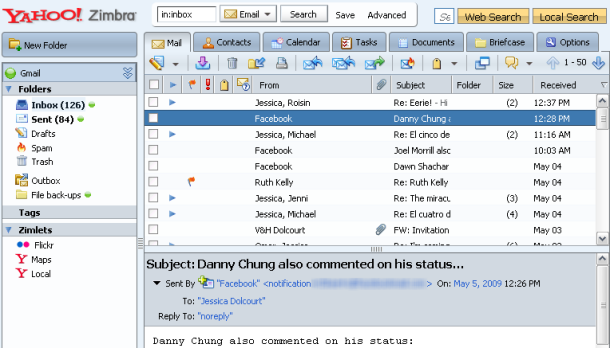 Zimbra has some useful features even if you don't have a supported account.
(Credit: CNET)

The benefits of the Zimbra Desktop for these pre-existing users are significant. They can import third-party email and supported third-party calendars in discrete inboxes and view expanded and contracted inboxes in the familiar left-hand organisation pane. For each account, including third-party web mail, they can tag messages, search through email, contacts and calendar appointments, and view conversations that are organised together and not so unlike Gmail's threading.

Zimbra account-holders can additionally create wiki documents within Zimbra Desktop and share them with other Zimbra users. They can upload files into a local briefcase (this is separate from Yahoo's now-defunct Briefcase service), and as mentioned above, can right-click email inboxes, contacts lists, and other content to export to another Zimbra user's Zimbra inbox within the organisation. These advanced sharing services are the emailing ideal, but not available to those of us who aren't on Zimbra's server (more on this below).

And if you don't have Zimbra-supported email?

There's still some use in downloading Zimbra Desktop to help manage your third-party email accounts, but complications and qualifications abound. You should be able to add any email account that supports POP and IMAP standards, plus Yahoo email, contacts and calendar, and the same from Gmail. If your IT admins make your Outlook Exchange Server settings available to you, you'll be able to get your business email as well.

These third-party services are branded with a beta marker, a wise warning since some work with a caveat. Hotmail, for example, will integrate with Zimbra Desktop so long as you have a paid Hotmail Plus account, or have been grandfathered in from the Outlook Express Days. When you sign up in Zimbra, this is noted by the collapsed link "must allow client access". Likewise, the bumpy support for Gmail doesn't yet convert Gmail labels into Zimbra tags, and Zimbra Desktop 1.0 merges Gmail address book contacts in a way that only surfaces those contacts you've added by hand, not the contacts captured through day-to-day emailing. Zimbra says they're working on a fix, which should be released in a few weeks.

Once you've got your inboxes migrated over, you'll be able to take advantage of searching through mail messages and adding tags, even if your third-party client doesn't support those features by default. Zimbra's ability to group conversations in any mail service is another benefit. Unlike Gmail's service, it won't thread conversations within a single inbox entry, but it will signify with an arrow tip in the margin when there's more than one message with the same subject line.

You'll still be able to create documents in Zimbra if you're using it to sort third-party accounts, but at this point they must route through the Zimbra server in order to share the link. In the future, these documents will send as external attachments, perhaps as soon as June.

Since we didn't have access to a Zimbra-supported account, and therefore to its more advanced collaboration features, the program's overall performance is harder to gauge. Difficulties in setting up our unsupported Hotmail inbox and Zimbra's inability to import 90 per cent of our Google contacts makes us hesitant to recommend it as anything more than a companion product for non-Zimbra users. At over 40MB for Windows and Mac editions, it was also slow to install and load. However, if you've got lots of space, the calendar importing, conversation view, and search fields are nice bonuses, as is the convenience of viewing multiple web mail inboxes in a single program interface.

While Zimbra's stated demographic with the Zimbra Desktop are its registered users, it doesn't help its cause that it takes effort to sign up for a Zimbra account. Most consumers find Zimbra through an organisation that uses it; others may go through an internet service provider or hosted partner that might sell subscriptions to Zimbra-powered features under the company's own name. An open source subset may run the open source Zimbra Collaboration Suite on their networks, but for folks without a finger on the pulse of the open source community, finding one of these to plug into could take more motivation than it’s worth.

Zimbra Desktop certainly has some budding inbox concepts we'd like to see ripen, but until Yahoo's Zimbra team can smooth out the grafting challenges with Gmail and other third-party services, those without Zimbra accounts who are feeling less experimental ought to stick to Thunderbird as an Outlook alternative.

-- Posted by by Jessica Dolcourt