User support may be stressful at times, but it can also be highly entertaining. Brien Posey shares another round of silly things his users have said and done.

About a year ago, I wrote a list of my 10 favorite stupid user stories. Although that list was fun to write, it was really hard to narrow the list down to 10 items. So I decided to write a sequel and cover 10 more tales. 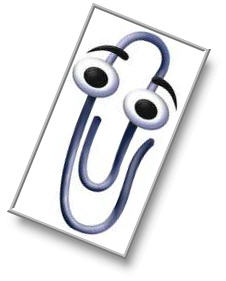 I'm sure that most of you probably remember Clippy -- Microsoft's annoying animated Office Assistant, which will no doubt be recalled with the same fondness as Microsoft Bob. (For those who don't remember Clippy, it was an animated paper clip that debuted in Office 97.)

Back in 2000, I was working in the healthcare industry. One of the facilities I was in charge of was using an ancient version of WordPerfect, so I decided to upgrade them to Microsoft Word. Upon seeing Clippy for the first time, one of the users thought that Clippy was an animated stethoscope and that I put this animated stethoscope on everyone's computer as a way of celebrating the fact that she was about to become an RN.

About a week into my first job as a network administrator, I got a call from a user who said that she spilled coffee on her keyboard. I told her to turn off her computer and that I would bring her a spare.

I expected to find the user's keyboard saturated in coffee, but instead the keyboard was completely dry. However, the keys were completely immobile and were coated in some sort of crystalized sugar. If she had spilled coffee on the keyboard then the coffee must have been almost pure sugar and the spill must have occurred about a week before I got there.

Keyboards were fairly expensive at the time, so I wanted to try to salvage hers if I could. I tried chipping away the sugary substance with a screwdriver, but I couldn't get it off. I had gotten in the habit of cleaning keyboards in rubbing alcohol, but a normal cleaning just wasn't working. Since I couldn't seem to free the stuck keys from their sugary cocoon, I decided to try soaking the keyboard in a bucket of alcohol. The problem was that I made the decision at 4:30 on a Friday afternoon before a holiday weekend. When I returned to the office on Tuesday, the alcohol had dissolved the sugar, but it had also dissolved much of the plastic. The keys now had the consistency of Jello. There was simply no saving the keyboard after that.

A user at one place where I worked installed a copy of the game Centipede onto his computer and then gave bootleg copies to everyone else in the organization. Unfortunately, the game was infected with a rather nasty virus. The next day, I had to drive to Ohio and spend the entire day cleaning the virus off of everyone's computers. The morning after that, I got a call from the director of the facility saying that the virus had returned. I drove all the way back to Ohio and started checking out the infected computers. I noticed that the Centipede game had been reinstalled. When I asked one of the users about it, she told me that I was an idiot and that computer games can't carry viruses, so she had put the game back onto everyone's computers.

Somewhere around 1992 or 1993, I was working for a large insurance company that had an in-house marketing department. The marketing department decided to invest in a graphic arts software package that included a rather extensive clipart library on CD. Although this might not seem remarkable today, there was only one computer in the entire company that had a CD ROM drive, and that computer belonged to the IT department.

We've all seen the fraudulent email from the alleged Nigerian prince who wants to give the recipient millions of dollars. Even though that email message (and an infinite number of variants) are laughable today, there was a time when the message was brand new.

I once had a department manager tell me that one of his employees had quit his job rather abruptly because he was receiving millions of dollars from a Nigerian prince who had contacted him through email.

I have to admit that I had never touched a computer before 8th grade. That year, however, I was accepted into a school that focused on math, science, and technology. Because the school placed such a heavy emphasis on computer science, I would have thought that the teachers would have been computer savvy. But I remember one teacher using magnets to hang 5.25-inch floppy disks on the side of a metal filing cabinet.

I once got a call from a user who said that he thought that either a circuit breaker had been tripped or his power strip had gone bad because neither his computer nor his monitor were receiving any power. This guy was normally pretty sharp, so I assumed that his diagnosis was probably correct.

One time, a user called saying that their server was down. I drove to the facility and found the server powered off. I booted it back up and all was well.

The next day, the same thing happened. This time, I was able to ask the person I talked to on the phone to check to see whether the server was powered on. The server was turned off, so they powered it up and fixed the problem.

About a month later, I had all but forgotten about the power failures. I was at the facility for something completely unrelated when someone made an off hand comment that every day the server goes down at about the same time and they have to manually turn it back on. I confirmed the person's story by looking at the event logs and decided to come back in the morning to see what the problem was. The next morning, I watched in horror as someone yanked the server's power cord out of the wall so that they could plug in a coffee pot (which they sat on top of the server, no less). When the coffee was done, they unplugged the coffee pot and plugged the server back in.

One company I worked for had a number of printers throughout the building. Needless to say, there were plenty of instances of users having trouble figuring out how to select the correct printer. The story that really sticks out in my mind was about a guy who decided to look for another job. He printed a resume and cover letter while he was at work. This alone would have been bad enough, but his cover letter seriously bashed the company he was currently working for.

As you have probably already guessed, he sent the resume and cover letter to the wrong printer. It gets better though. Since the document didn't print where he expected it to, he assumed that the printer was having problems and tried resending the document many, many times. Meanwhile, on the other side of the building, everyone in one of the other departments was having a big laugh over the misdirected resume.

I used to work for an organization that had a policy that all computer hardware purchasing had to go through the IT department. One of the department heads came to me for a quote on some new PCs. He didn't like the price I gave him and decided to go shopping on his own. I don't know where he found them, but the guy got a cut-rate price on some old Tandy 1000s.

For those who may not be familiar with the Tandy 1000, it was a PC that was released by Radio Shack in 1984. This incident happened in 1999. So the computers the guy purchased were roughly 15 years old. He just couldn't seem to understand why I refused to connect the computers to the network or why I was unnecessarily costing the company money by insisting that departments purchase modern hardware.

Can you top these tales? Share your own stories about silly, befuddled, and outrageous user behavior.

Brien Posey is a seven-time Microsoft MVP. He has written thousands of articles and written or contributed to dozens of books on a variety of IT subjects.