Due to be released in the next couple of months, the new Samsung Series 9 (2012) may just give the MacBook Air a run for its money.

You may have heard about the second-gen Samsung Series 9 (2012) laptops first shown at CES and subsequently launched in South Korea on February 15. I've been keeping an eye on it for a couple of months now, and which is presumably on its way to retailers around the globe. Indeed, everything we're hearing from PR sources so far indicates a Q2 release in additional parts of Asia, with the estimated U.S. release date currently pegged as April 2012. 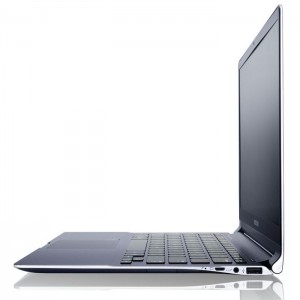 So what's so special about the two new models in the Samsung Series 9 (2012) laptop series? For one, the combination of the new Series 9's drool-inducing design and powerful hardware specifications makes it one tempting device. Samsung says the 15-inch model as the thinnest and most compact 15-inch premium laptop. The 13-inch model, on the other hand, weighs a mere 1.16kg and is 28 percent smaller than the original Samsung Series 9. Different dimensions aside, both models are - more or less - functionally equivalent.

TechRepublic Editor Bill Detwiler, who wrote about the original Samsung Series 9, noted prior to cracking it open that it is a worthy rival to the Apple MacBook Air. And given that the Samsung Series 9 (2012) now comes with a boot speed of 9.8 seconds as well as a "Fast Start" for 1.4 seconds to wake-up from sleep mode, I would say that the upcoming Series 9 laptops look even more attractive than the current generation of MacBook Air laptops.

In press material I received from Samsung, the company claims it has spent 9,000 hours of design sketches and mock-ups, 24,000 hours of R&D, and a total of 33,000 hours spent by Samsung designers and engineers.

"The new Samsung Notebook Series 9 represents the ultimate in Samsung craftsmanship towards precision engineering and premium design," says Seongwoo Nam, Executive Vice President and Head of the IT Solutions Business of Samsung Electronics. "The new Series 9 embodies the originality and heritage of its predecessor while eliminating unnecessary factors. The refined aerodynamic design of the new Series  9  represents  the  best  of  Samsung's  design  with  top  performance  and  functionality."

To help you along, I've compiled what is known of the 13-inch and 15-inch Samsung Series 9 (2012) in the table below. Due to Samsung's unwillingness to divulge its exact lineup at this time, some of the information may not accurately reflect the models that may retail where you live, so caveat emptor applies.

(Base price has been confirmed as accurate by Samsung Public Relations in the U.S.)