The time is approaching when a computer on your person will be better and more productive than your desktop.

While most people are either praising or objecting to the upcoming Windows 8 or obsessing about touch as an input method, I'm wondering when my personal computer will become available. My needs are relatively simple: I want glasses with a transparent HUD, a phone with a real OS and Kinect-like gesture, and voice recognition. 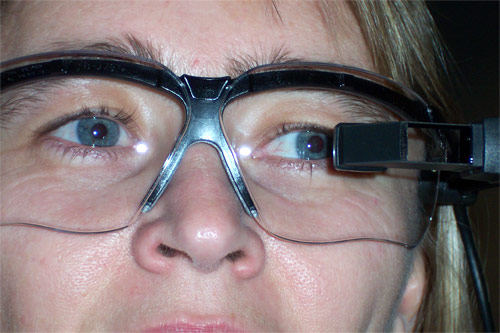 The glasses I require need a high resolution transparent display, with accompanying microphone and speakers. They also need to incorporate some Kinect-like sensors so they can read my gestures. The computing power would be mainly in my phone and the glasses could connect through Wi-Fi. Now I know Epson, Sony, Google, Microsoft, and others are already working on these types of glasses, but they seem a little way from a commercial release. I have noticed that Kogan is currently selling a pair of video glasses (they record video) for around AU$40. All I need is a depth sensor and a multi-array microphone next to the video camera, and, of course, a transparent HUD.

To avoid becoming "Yet Another Toy", the phone/glasses combination will require a powerful OS that will let me do the same kind of things I can do on my desktop, laptop or tablet. The coming release of Windows Phone 8 fulfills this requirement, as it is based on the NT kernel and shares a number of common APIs with Windows 8, as well as increased screen resolution over WP7. The Windows 8 Modern UI is designed for multiple input methods, so I can combine gesture with voice commands, as well as using a "mouse" pointer or a virtual keyboard in mid-air or on any surface I wanted. Video Skype calls, watching movies, browsing the web, or serious Office work could all be done in any environment. Navigation systems would become personal, tags can pop-up over real world entities, and people's Facebook profiles can float over their heads. It also offers a great tool for LARP (Live Action Role Playing), so I could take my World of Warcraft fire mage into the real world and launch virtual fireballs at other participating gamers.

However, while the possibility of my PC exists, there's still a lot of software/hardware to improve and develop, but I feel at least optimistic that we'll see some movement towards these devices in the next few years. I didn't really expect that we would have a Kinect device this early and certainly didn't expect it to be sold to the general public.

Now I probably won't be satisfied until I have a display wired to my optic nerve, an embedded computer, and a few extra petabytes of memory inserted in my skull (with indexing please), but the glasses/phone combination seems to be becoming more and more likely. It promises a personal computer that will be with you all the time (or, at least, until you take them off), and the freedom to leave behind desktops, laptops and tablets.

Tony is the owner and managing director of Microcraft eLearning and is one of the creators of the AUTHOR eLearning Development System.