Augmented reality? Is this another name for Apple CEO Steve Jobs' infamous reality distortion field?
Nice try but no. Augmented reality (AR) means overlaying computerised elements, such as graphics or text, on top of a real-time video or other real-world display with the aim of providing additional information to the viewer.

That sounds pretty abstract - do you have a few examples?
The most basic examples of AR can be seen on televised sports games, where scores are overlaid on match footage, or digital annotations are added to show the trajectory of the ball or highlight a particular player.

More advanced AR has been developed by the military - for example, superimposing information onto an aircraft cockpit or a pilot's visor to provide target information or other relevant data.

Data or objects can also be projected onto transparent helmet-mounted displays for use in troop training exercises - allowing soldiers to carry out exercises in real landscapes augmented with depictions of enemy troops or tanks, for example. By using AR in this way, the army can put soliders through a wider range of scenarios than would normally be possible, without the need for extra hardware or manpower.

That stuff's been around for years. Why the big fuss now?
In a word, smartphones. While analyst house ABI Research notes that AR technology has been with us for more than 15 years, the company is predicting dramatic growth in the take-up of the tech over the next five years - driven by mobile applications of the technology.

According to ABI, an entirely new mass market for AR has opened up in the mobile world, thanks to the increasing availability of technology such as video cameras, GPS, compasses, and accelerometers on smartphones.

In a recent report, the company predicted revenue associated with augmented reality will grow from a modest $6m in 2008 to more than $350m in 2014 - a hike of more than 5,700 per cent - largley due to to mobile apps and marketing. It also picked out Android and iPhone as the two platforms where AR, used for personal navigation applications, is seeing the strongest early takeup.

Tell me more…
The first mobile device running Google's Android OS - the G1 - came with GPS and a built-in compass which gave app developers an exciting toolkit from an augmented reality point of view - allowing the real-world locations of objects to be precisely pinpointed. Notations could then be overlaid on the phone's camera view to provide an augmented reality view of the world.

The Wikitude app (pictured below) made by Mobilizy was among the first to exploit AR in the smartphone world - it used the G1's hardware coupled with data from the Panoramio, Qype and Wikipedia web services to identify buildings and landmarks and then overlay annotations onto the camera view. 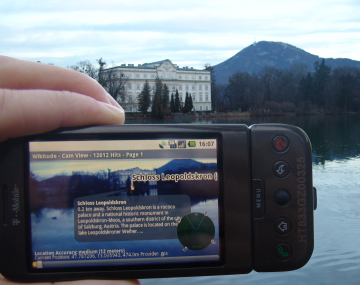 Other developers have since joined the party and taken AR beyond Android.

The latest iteration of Apple's iPhone - the 3G S - has GPS, a compass and is also capable of superimposing data over the camera view.

One AR iPhone app in the pipeline - called WorkSnug - will offer mobile workers in London and San Francisco a solution to their wi-fi finding blues, as the video below shows:

There are plenty of other AR apps making a splash too - whether it's helping users find a good restaurant nearby, or guiding them to the nearest bank or transport hub, or even overlaying Twitter users' tweets onto the camera to provide an at-a-glance snapshot of who's saying what in a particular location. That could be handy at a football match, say.

But can't you just do that by mashing up geo-tagged tweets with Google Maps?
Yes, you can and so you could argue that AR is mere windowdressing for existing functionality.

However, the idea is that it also makes the experience more immersive and intuitive: tweets on a map still require you to mentally picture the locations that the tweets are coming from. AR bypasses that layer of mental processing.

Sounds impressive. But I'm sensing a but…
But of course - this is technology after all. While there's no doubt there's a truck load of hype around AR at the moment there are questions about its usefulness owing to the accuracy - or lack thereof - of GPS positioning data.

If AR is to be truly useful it needs a backbone of incredibly precise location data. Telling a user they are outside the finest restaurant in the world is all very well - but not if they are actually standing next to the burger bar two doors down…

I see your point.
ABI Research notes that GPS location accuracy is not currently adequate for many potential applications of AR such as shopping or even gaming.

The analyst believes additional techniques will therefore be required to refine location precision and usher in this brave new augmented reality world - with one suggestion being a global database of geo-tagged information, collectively built by governments, businesses and end-users.

I won't throw away my guidebooks just yet then.
Probably wise.