A lesson in correlation and causality

Written on BA2487 flying from Barcelona to London, and dispatched to silicon.com from an open corporate network in London

For the last week my wife and I have been living in and working from a 22-story hotel in Barcelona. Our room was on the sixteenth floor and getting an elevator always seemed to be a big deal. We always seemed to be in a hurry and had to wait a long time for a car to arrive, and then it would stop at four or five floors on the way up or down.

After about three days this became really frustrating and I have no idea why but my wife started holding down the door-close button.

I couldn't see any reason why this should be a purposely engineered facility as it would defy all queuing theory design, not to mention service-time targets and fairness objectives applied in these cases.

But in the selfish interest of getting to our destination floors fast, we persisted. It worked without fail!

Had we stumbled on something strange but useful, or was it a succession of chance occurrences? Basic statistical analysis said this phenomenon was rapidly approaching as close to certainty as it needed to convince me it did indeed work.

At this point it would have been very easy to believe but the scientist in me kept waiting for a failure to disprove this growing evidence base.

Sure enough - on the sixth day it happened! We boarded on the sixteenth floor, and the car stopped for a call on the fourteenth. So was it a fluke? Did we fail to press the 'door close' button quickly enough? We soon found out. Over the next two days the failures came thick and fast in both the up and down directions, at all times of the day and our belief rapidly dissipated.

So how did we enjoy such a long run of success? Hotel occupancy seems to have been the culprit. There had been a dip in the number of residents that led to a smaller demand for cars. And of course, elevator systems, like so many transport systems, fail catastrophically. That is, they go from a satisfactory service level to a perceived failed state (ie irritatingly slow) in a matter of a few extra customers.

The moral of this experience is of course that correlation does not automatically infer causality. As a student one of the most important things I was taught was to always try and prove things theoretically and practically from many different directions, and always try and destroy the argument from even more. If the case survives this assault, then in all probability it is likely to be correct.

One really nice, comical example of correlation and no causality popped onto my screen while I was looking at venganza.org the other day. Below you can see a graph from that site which shows the relationship between global average temperature and the number of pirates. 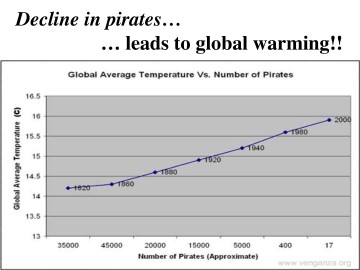 If we believed the facts as presented we would start recruiting more pirates in order to stop global warming. But common sense tells us this is nonsense.

Unfortunately there are many cases like this, where people want something to be true and then go on to build up a belief that is unshakable.

Tragically in many cases no amount of scientific, engineering or mathematical proof will shake that belief. This leads to bad decisions and huge waste for society and spans every aspect of politics, healthcare, business, environment, technology and behaviour.

A good case in question is the mobile phone headache syndrome.

Hundreds of scientific studies and reports fail to find any positive evidence that mobiles cause health problems.

And of course these err on the conservative side in providing qualified statements because reputations are at stake and we now live in a blame culture, which only affords an opportunity for a blitz of criticism from the believers.

Just look at all the reporting and investigations for bias. It is clearly evident in the pro-problem direction and can be easily construed in the con-problem direction - and even more so if you want to believe. Right now I am definitely in a dense RF environment and have a bit of a thick head but that I think is more to do with a series of late nights and a lot of travelling!

Is there anything we could do to help? I think not! Belief systems are more powerful than truth and always lead to long-sustained ignorance and waste. My prognosis for the mobile, and other similarly inflicted industries is that they are up against 'Flat Earthists' and the debate and waste will rumble on for decades.

In the meantime the real problems in society that see thousands of deaths a year and a lot of suffering will continue to go unaddressed and neglected. To my mind that is the real tragedy. We only have a finite amount of time, money and skill - and it ought not to be wasted.