CIOs are still looking for the new features to make Windows 8 an enterprise must-have, according to TechRepublic's CIO Jury. 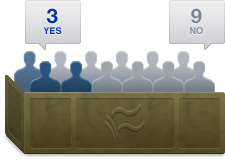 Despite all the excitement about the new Metro interface and the emphasis on tablets, it seems that CIOs are still waiting to for the must-have enterprise features in Windows 8.

Last week Microsoft showed off the consumer preview of the forthcoming operating system, expected later this year. Among the key changes is an emphasis on tablet and touch-based computing. Windows 8 is designed to run on laptop, desktop computer and tablet hardware, scaling its interface to various screen sizes, and the new tile-based Metro interface.

But while Microsoft argues that Windows 8 represents a "generational change" for Windows - the likes of which has not seen since the release of Windows 95 - it seems members of TechRepublic's CIO Jury are not impressed by the new features they have seen, at least not so far.

When asked, "Do the new features in Windows 8 provide enough value to make it an attractive option for your organisation?" TechRepublic's CIO Jury of tech decision-makers voted 'no' by a margin of nine to three. While intrigued by a number of the new features,many IT chiefs are - for now - apparently still looking for the features that make it essential for them to get ready to upgrade.

Kevin Leypoldt, IS director at Structural Integrity Associates, explained: "While I remain optimistic about the unification of the Metro interface across all platforms - desktop, mobile and tablet - I do not see this as a value-add in our organisation. The Portable Workspace however does sound intriguing and may help win BYOD acceptance and adoption if it can be proven secure and easy to use."

Leypoldt added: "However, there are a number of other features, such as IE 10, the app bar, windows store, gestures, and a system-wide spell checker, which I don't see as a driver to Windows 8. It's my opinion that Windows 8 is more about Microsoft's unification of multiple platforms and embracing the future of computing in mobiles and portables than about being targeted at the corporate customer."

Similarly, Neil McGowan, CIO at JD Williams, said the actual level of additional features over Windows 7 are "not major" from a business perspective. He added that there is also some concern over new the Metro interface and moving to a touch interface when most staff will have traditional laptop. McGowan said: "Looks like Microsoft following Apple, not providing leadership."

Kelly Bodway, VP of IT at Universal Lighting Technologies, said because business users are not consumers but producers of information "the feature set does not provide enough motivation to implement".

Michael Hanken, VP of IT at Multiquip, said the operating system is not a business driver by itself and will lose "more and more value" with the rise of browser-based cloud services and desktop virtualisation, while Lance Taylor-Warren, CIO at HAWC Community Health Centers, said: "There is not enough initial value to be an early adopter. I'm sure we will transition to it in the future, but it will not be until three to six months of release."

However, some members of the CIO Jury were cautiously optimistic: Matthew Metcalfe, IS director at Northwest Exterminating, said: "Windows 8 is an evolution towards what will hopefully yield devices that are enterprise-friendly. Android and iOS have not delivered these features for us."

And Tom Galbraith, director of IT at the US District Court, Southern District of Illinois, said: "As mobile gains more traction in the enterprise, there is value from an administrative perspective in having the ability to leverage knowledge and tools across a common OS running on mobile and non-mobile devices. But of course I reserve to right to say, 'We shall wait and see'."

Similarly, David Wilson, director of IT services at Vector CSP, said: "It will take some time and research to prove whether the new functionality would pay for itself."

Others said it is too soon to pass judgment. Tim Stiles, CIO at Bremerton Housing Authority, warned: "It is too early in the product's life to answer this question accurately."

Still, there's no doubting the importance of the release to Microsoft. Adam Farkas , VP of IT, Crown Media Hallmark Channel, said: "I firmly believe Windows 8 is a make-or-break product for Microsoft." He added: "For Windows 8 to truly succeed, it must unify our mobile computing with our desktop computing in a user-friendly way. My email, my browsing, my apps, my printing, my social networking should be ubiquitous, transparent and secure regardless of where I am or what device I am using."

This week's TechRepublic CIO Jury is

The CIO Jury is composed of the first 12 members of the CIO Jury pool to respond, but tech chiefs who don't make into the first 12 still make their opinions heard, and one recurring issue for CIOs is getting the best from their existing investments before moving onto the latest technology.

Many may well be reluctant to move to a new operating system with the disruption and retraining that this often entails, especially as many are only now moving to Windows 7, or keen to protect the investment they have already made.

As Michael Eason, CIO at The American Board of Anesthesiology, said: "Our organisation moved from Windows XP to Windows 7 two years ago. We were more aggressive than most companies our size, and many SMBs are still using XP today.

"Changing the operating system on your employees' PCs is disruptive, inefficient, and labour-intensive. I see nothing in Windows 8 that would justify an upgrade for any company. That may change over time, of course, but as of now this upgrade would create far more problems than it would solve."

Similarly, Joel Hughes, VP of IT at Scranton Gillette Communications, said the new features "certainly will not have us jumping over to the new OS and swapping out hardware en masse." Hughes said he was planning on "organically trickling 8 into our organisation via new PC acquisitions", adding "We've still got a variety of older machines chugging along with XP, but not for long."

Chris Peek, CIO at Hillsborough County Sheriff's Office, said that, based on what we have seen so far, there does not seem to be "any compelling feature" that would justify upgrading to Windows 8. He added: "In fact, some of what has been presented looks like it may present a significant learning curve for users. Our organisation just began the transition from Windows XP to Windows 7 last year, and we are only doing that on new machines because they come with the new OS."

Support from software vendors is a key concern as well, as John Gracyalny, director of IT, SafeAmerica Credit Union, said: "My reason is that a number of my software vendors do not yet support Windows 7, so I would not expect them to support 8 for maybe another two years. If we are lucky, given the scope of the changes."

Tadd Moore, IS&T director at Rooney Holdings, said: "It's still very early days. There are definitely some interesting concepts and features brewing, but not nearly enough detail to merit considering early adoption. I'd have to make a lot of assumptions that things will work as I'd expect them to for it to be an attractive option, and as many of us have learned, products don't often work as they are expected to right out of the gate."

Moore added: "When it matures, absolutely. I'm a Windows Phone 7.5 user and am sold on their UI paradigm. It will be great to see the lines between what is possible on a desktop, a tablet, or a phone, disappear completely."

Gavin Whatrup, group IT director at Creston, said the "stand-out idea" in Windows 8 is the concept of a common platform across desktop, laptop, mobile and tablet. "On paper that sounds very appealing and could, if realised, provide all sorts of opportunities for truly flexible working," he said, but added: "However, I doubt it will be as simple as that. Apple's appeal will prevail and the mix of devices will remain."

And Graham Yellowley, technology lead equities at LCH.Clearnet, wondered whether Windows 8 has come too late for the PC: "On the surface Windows 8 looks appealing, more details about security models and migration paths are required but so far so good.

"The issue is whether Windows 8 is too late to stop the momentum of iPads or whether a Windows 8 tablet has the opportunity to leverage the interface to re-establish its market share. My personal view is it is good but too late - PCs are dead and iPads rule."

Want to be part of TechRepublic's CIO Jury and have your say on the hot issues for IT decision-makers? If you are a CIO, CTO, IT director or equivalent at a large or small company, working in the private sector or in government, and you want to join TechRepublic's CIO Jury pool, or you know an IT chief who should, then get in contact.

Either click the Contact link below or email me, steve dot ranger at cbs dot com, and send your name, title, company, location, and email address.