For many people, entrance into the realm of computing came via an Apple II. Although Apple abandoned the Apple II line a long time ago, you can relive those days from the comfort of your Web browser. Here's how.

For many people, entrance into the realm of computing came via an Apple II. Although Apple abandoned the Apple II line a long time ago, you can relive those days from the comfort of your Web browser. Here's how.

One of the first popular home computers in the 70s was the Apple II. Along with the TRS-80, it defined personal computing until the IBM PC came along. Although they were primarily used as home computers, the Apple II snuck into many offices as well as on the back of Visicalc.

Even after the IBM PC and its clones conquered the microcomputer market, the Apple II kept itself going in the home and especially in the education market. As a matter of fact, the Apple II GS line was so successful that Apple was worried for a while that GS sales were eating into Mac sales. Although the market resisted for a long time, Apple eventually abandoned the Apple II line and focused exclusively on the Macs.

Thanks to the Internet, however, you can relive the days of the Apple II. Much like I mentioned with the TRS-80 Model I, you can emulate an Apple II right in your Web browser. All you have to do is visit the Virtual Apple Web site.

Unlike the TRS-80 Model I Basic emulator page, the Virtual Apple site doesn't use a Java machine. Instead, it uses an Active X control if you're using IE or an extension if you're using Firefox. As such, running it is a little more dangerous than the Model I site, but the Virtual Apple site claims to be spyware free. I loaded it on a test machine, and it didn't seem to cause any problems, but if you're worried about or if your organization doesn't allow Active X, you may want to try a different machine.

This brings up another question regarding the Virtual Apple site. That question is obviously the issue of copyright violation. Even though these programs are in some cases 25+ years old, probably the original publisher -- if they're still around -- still holds the copyright. If so, I'm sure that Virtual Apple would be liable, but it's a question for the lawyers if you would be running the programs from the images.

How good is it?

The graphics are about as good as they were on the original machines. For example, here's a version of Flight Simulator: 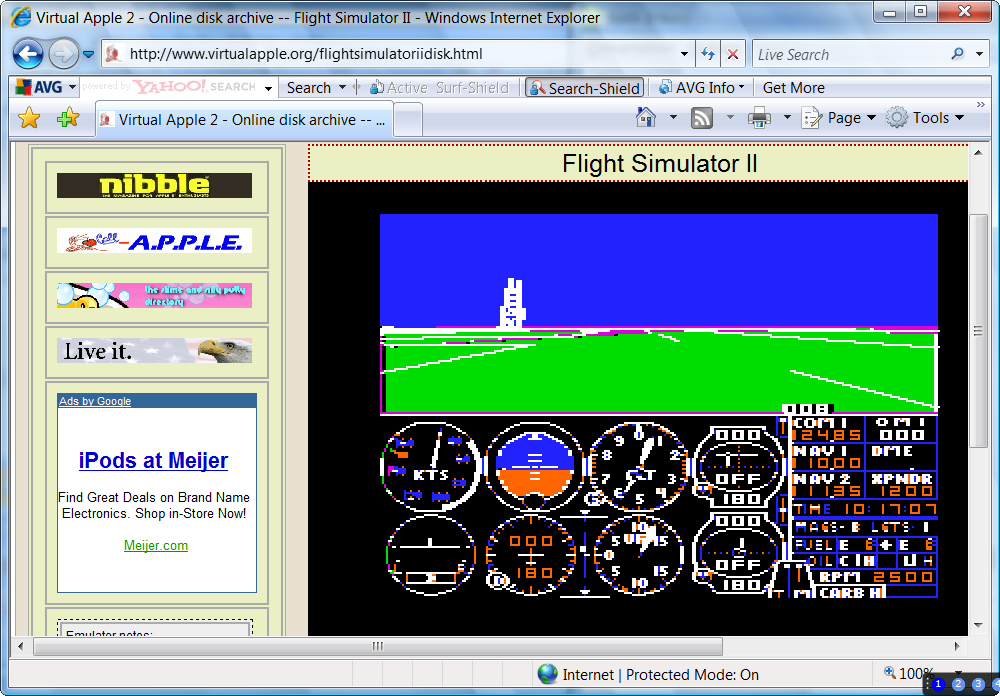 On my test machine, which is a 3.0 Ghz Windows Vista machine, the performance was pretty disappointing, but your mileage may vary.

If nothing else, the emulator is good for those who used an Apple II in the past and want to play some of the old games on it. If you don't have your Apple anymore and want to relive the past, give it a shot.