It may seem like something like gathering screen shots for an old game like F-19 Stealth Fighter is nothing but fun and games. Not so. When you start mixing old software with new technology, you can sometimes be in for a lot of work. Find out what I had to go through to build an F-19 Stealth Fighter photo gallery.

The other day, I mentioned the F-19 Photo Gallery I put together for the site showing just how much of a disconnect there seemed to be between the memory of old PC games and Reality. What I didn't expect was how much of a challenge it was to put the gallery together.

Not having a PC in the office that ran pure DOS with VGA and a screen capture program, I decided to load F-19 up on my production machine under Virtual PC 2007. I already have a DOS VM machine built (along with every version of Windows, OS/2 and BeOS) so it seemed like a pretty quick solution.

F-19 installed with out a problem, but things fell apart when I went to actually run the game. I was greeted with this message: 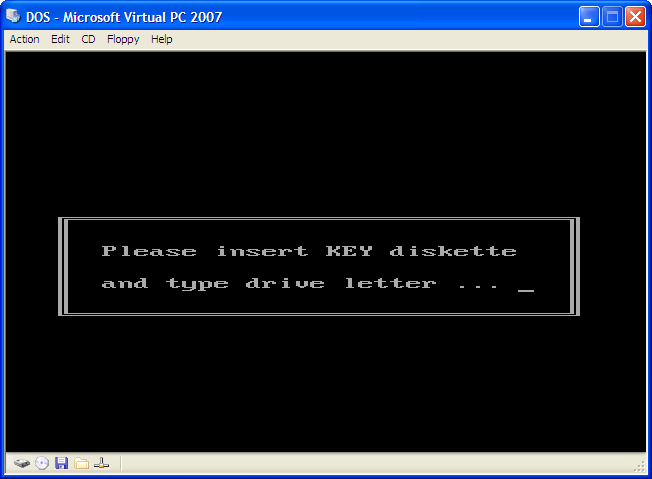 MicroProse used a system whereby you had to have the original disk placed in the floppy drive before the game would run. Because I had a legitimate key disk, this ordinarily wouldn't have been a problem. However, when I put it in the floppy drive, F-19 redisplayed the same message indicating that either the disk was bad, or Virtual PC couldn't read it.

I then installed the game on my Tandy 1000 TX to see if the floppy was bad. It is 20 years old after all. Sure enough the game loaded and worked fine. That meant that Virtual PC's DOS VM couldn't read the floppy properly. The only thing I can surmise is that the game made some direct hardware call to the floppy drive that Virtual PC couldn't handle.

Once the game was running on the Tandy 1000, I had to figure out how to get screen shots. There are plenty of screen capture programs available for DOS, but you have to be careful because they can take so much memory that the game wouldn't run. Plus, because the Tandy uses a video mode that is unique to it and the PCjr (320x200 @ 16 colors) most DOS screen capture programs won't work with it. After a quick search of the Internet, I found MobyGames.com which recommended the Camera utility. Camera supported Tandy graphics, so I downloaded that to my production machine, transferred to a low density floppy (which is all the Tandy supports) and then installed it on the Tandy.

Camera's a nifty little utility. It only takes 6048 bytes of RAM when it runs. That's 6K. In today's day and age, that's phenomenally thrifty. You can set any hot key you want too which made it handy with F-19 because the game had so many key combinations necessary to play. Common ones were already taken, but Camera allowed me to set a key combo that wasn't in use.

Once I loaded Camera and started the game, things should have been easier, right? Nope. Unbeknownst to me, Camera outputs files in a format known as LBM. What's LBM you ask? That was my question.

LBM is a file format popularized by Electronic Art's Deluxe Paint program. Finding support for LBM was difficult. I figured seeing as how there's nothing Linux can't do, I tried The GIMP. Nope. After some looking however, I discovered that Paint Shop Pro supported LBM. So, I installed Paint Shop Pro on my production machine.

Then I had to transfer the 50 screen shots I had taken on the Tandy back to my production machine. Each graphics image was a little over 55k in size. Using the trusty xcopy *.* a: /m command, I was able to transfer all of the images via 720k floppy in 4 passes.

After all that, I could load and modify the LBM files. Because they were taken at 320x200 the images were small. So, I had to resize each one, save them as JPGs, and load them in our Image Gallery tool. Finally the gallery was on the site.

The entire effort may sound like an exercise in semi-futility and a lot of work to go through. However, from a practical standpoint, it illustrates the problems that occur when you have old software that you need to use in a modern environment. Sometimes some of the modern tools like Virtual PC don't provide everything you need to make old software work properly or get the results you want. A mix of old machines and old skills can get the job done.

So, as you can see it was quite a bit of work. Even so, it was a lot of fun playing the game again. Plus, there's always something to be said about facing the challenges necessary to bring the content to all of you. It's all worth it in the end.