Cable management--it must be the bane of every

network administrators life. You can make every effort to patch things neatly

and keep cables in a particular order, but, it doesn't take long before patch

panels turn in to spaghetti junction. I don't know about you, but for me, the

length is just too short, the next is way too long--this is really annoying and

creates an unnecessary mess in cabinets.

port in your switch lately? Find yourself tugging on something, hoping that you

one? If that sounds familiar I'm not surprised, take a look at some of these

photos I found on Google:

And these from the TechRepublic galleries: 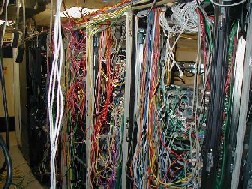 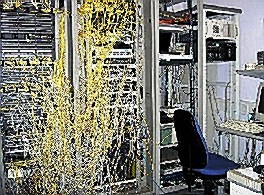 hands. Simply re-patching one cable can be a difficult experience; now imagine having

to swap out a switch; not fun!

With this being such an obvious problem, there must be lots of companies out

there trying to sell us solutions--some with 'do it yourself' kits, some with

theme tune). Lets take a look at what's out there.

We wont mention the no management option, which is

encountered the most often. The most widespread form of management is the

ties (even Velcro wraps for the more forward thinking individuals). Most server

structured cable layout; when planned and set up properly, these can be very 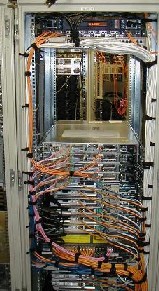 Here's an impressive shot from Matrixforce 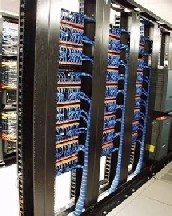 Well these look great, surely then it's just a case of

discipline on the part of anyone needing to re-patch or put in new patches? In

theory yes, although it seems that many cabinets and panels start off looking

like those above but soon degrade to the mess of which we're all accustomed.

The problem is that while everything looks neat in these installations, often

adding, removing, replacing or re-routing a cable can become quite a headache.

Look at the Example F above: extensive

cables, or worse, trying to replace one--that could be a pain. Things are made

easier by using Velcro cable ties as seen in the Example E. These allow you to simply loosen the bunch, which makes

tracing a cable much easier (I prefer to use Velcro when possible). One thing I

up excess cable. Typically, this is when you need to make a 2m patch and can

only find 3m cables--I think most people have done this at some time.

classic approach to tidying up. In the next installment, I'll tell you about a