The free network tool iperf is among the more easy-to-use on the Internet today. Rick Vanover shows some frequently used commands in iperf that you can use for quick network testing.

In last week's blog, I mentioned how iperf can be used for quick and easy network tests through the Java front-end applet, Jperf. In this week's blog, I want to go through a few handy use cases for iperf via the command line. Before we get too far into these examples, a quick tip to use for future reference is that if you can build your command in the Jperf gui to get the command syntax built instead of command-line iteration trial and error.

The first command line that would be a keeper is used to start an iperf server listener process for client connection. This is shown with the command below:

This will start an iperf listener on port 5999 (the default is port 5001, however), limit the iperf process to providing two connections, and finally report on the connections every 5 seconds. The two connections (-P value) is important, because after the second connection the server process will exit. Placing in a value of zero (0) will allow the iperf process to listen continually and without limit to the number of connections until closed. On a Windows host, when this is run, the listener process runs as shown in Figure A. Figure A

The other half of iperf is the client that will make the connection to a listener. To launch a client connection to a server named s-network1.amcs.tld using port 5999 (the non-default used in the previous example) for 60 seconds with a 5-second display interval, enter the following command: 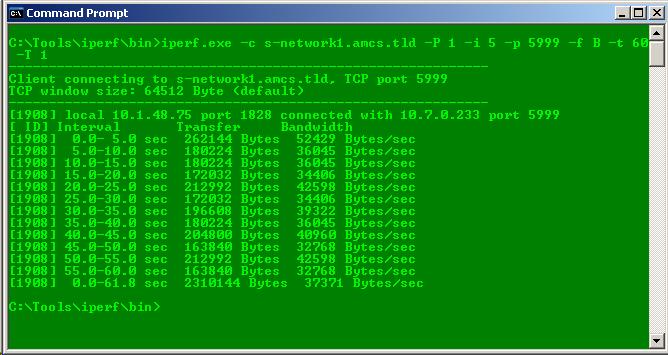 You can see where this is going, simply make a .bat file of your standard preferred test and fill in the server name for frequent tests. Iperf can be downloaded from the SourceForge Web site.