Although Cisco's NAC Framework isn't as easy to use as the Cisco NAC Appliance, it does offer the benefit of bringing together offerings from various third-party security companies. David Davis explains the different components of the Cisco NAC Framework.

Cisco's NAC Framework is an architectural design for how multiple hardware and software components can work together to protect your network from unhealthy clients. Those clients could be PCs without the latest security patches, the latest anti-virus definitions, or an enabled personal firewall. In this article, I'll attempt to explain the complex NAC Framework as clearly as possible.

What are the components of the Cisco NAC Framework?

Cisco's NAC Framework attempts to solve a complex problem and is consequently a complex solution. A full-blown implementation of the NAC Framework is not an easy task because the architecture includes lots of different components from Cisco and other vendors. For example, there is a NAC policy manager, multiple network systems, an audit server, a remediation server, and third-party security software posture validation servers. Figure A shows how the framework would work: 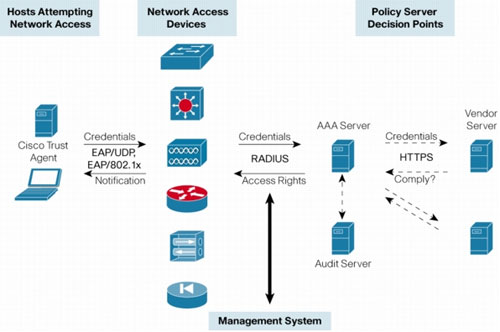 It's quite a challenge for both security and network personnel to make sure that the above-mentioned components work cohesively. Irrespective of that, the Cisco-led NAC initiative is supported by the majority of vendors associated with endpoint security, secure access gateways, and remediation servers.

How does the Cisco NAC Framework work?

So what can the Cisco NAC Framework do for you? Well, a lot. Here's how it works: 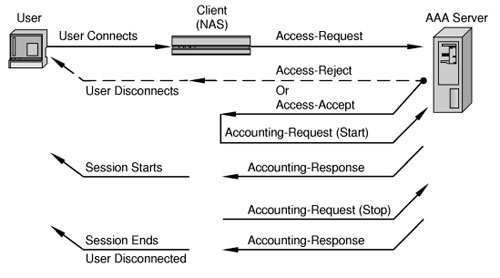 You should note that usually the 802.1X network authentication protocol is used to authenticate the devices to the network. The switch that the NAD is connected to must support 802.1X, or the device cannot be truly quarantined until it is authenticated and scanned.

What are the components of Cisco's NAC Framework?

Now that you understand how the framework works, you should learn a little bit about the components of the framework. These are as follows:

It's worth mentioning in this regard that Cisco Trusted Agent communicates only with client applications that are NAC-enabled by Cisco partners. There are around 50 vendors in the market actively participating in the NAC initiative. It includes leading patch management vendors, client security vendors, and antivirus vendors.

The Cisco ACS Server is a Cisco application that runs on a Windows or Linux Server. ACS servers can be scaled to very large implementations. Even without NAC, the Cisco ACS system operates as a centralized RADIUS or TACACS+ server. In general, the Cisco Secure Access Control Server manages the authorization, accounting, and authentication of users who access corporate information in a network.

Parts of the greater whole

Cisco's NAC Framework is an architectural design for how multiple hardware and software components can work together to protect your network from unhealthy clients. While the framework isn't as easy to use as the Cisco NAC Appliance, it does offer the benefit of bringing together offerings from various third-party security companies. At this point, you should understand the different components of the Cisco NAC Framework -- posture agent (Cisco Trust Agent), posture validation server (Cisco ACS Server), Network Access Device (NAD) -- the Cisco switch, and the remediation server (where users will go to get the firewall, OS, or AV software needed to get the PC host in compliance).