David Davis explains how Cisco's new AXP module works to allow third-party applications to run "on the router." Find out how this leap forward in "network virtualization" can be good news for net admins looking for cost-savings and other efficiencies.

Cisco has been talking about the "network as a platform" for a long time, but what does that actually mean, and what does the AXP network module have to do with it?

What is the AXP?

The Cisco Application eXtension Platform (AXP) is made up of a hardware card (three different models), modified Linux software that runs on the card, and a program for software developers. You could also say that the AXP represents "network virtualization."

To make this work, Cisco AXP provides an open Linux development environment. That's right -- the AXP is a card that goes into your Cisco router and that card runs a hardened version of Linux, customized by Cisco. So, you aren't running Linux on your current Cisco router CPU, RAM, and Flash or in the IOS. You are running Linux on a card that is inserted into the router.

Once you have this card and the Linux OS, you can then run third-party applications on that platform. Think about that for a minute. What if you could run a protocol analyzer like Ethereal or an IPS like SNORT "in your router?" What if you could run WAN Compression, performance monitoring, and network management software 'in your router?" Wow -- that would be amazing!

The AXP card that goes in your router will work in Cisco ISR Routers. Specifically, the models that it works in are the 1841, 2800, and 3800 series routers. This card is a standard network module (NME) or AIM card, depending on the router you are using.

This AXP card has its own memory, CPU, and Flash HD (and GB Ethernet in the case of the NME).

AXP is the first example I've seen that really lives up to the idea of Cisco's "network as a platform" solution. With the AXP, the router becomes a platform, not only to route packets, but also to provide a platform to run any application you want -- whether it is a network-related application or an application that is tailored to your business.

What are the specs for the AXP?

AXP has its own Linux CLI, error messages, debugging, and virtualization capabilities. It can run applications in various languages -- C, Python, Perl, Java. You can even read and write router configuration through APIs and receive info about the status of the router. An application running in the AXP could know if the router was taking errors on the serial interface.

Take a look at the architecture of the AXP and how it communicates with the Cisco IOS, as shown in Figure A. 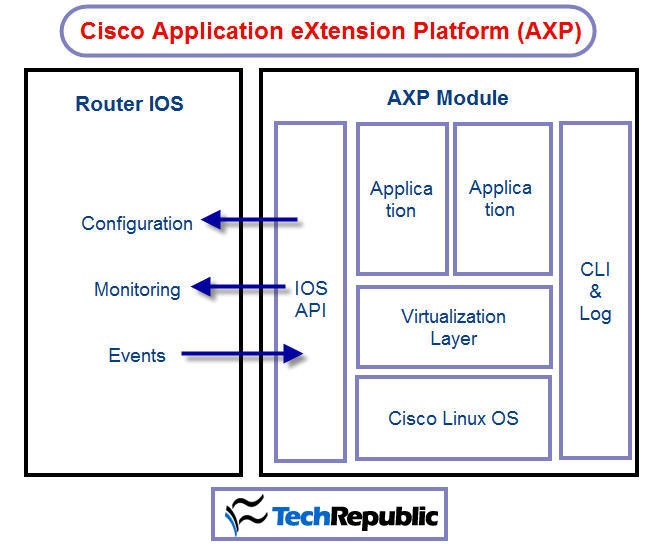 In fact, here are some examples of communications that the AXP could make to and from the Cisco IOS:

In other words, you can really create and run "network-aware" applications such as: open source network monitoring; desktop and server management; tracking assets and patching PCs; unified messaging to provide call recording during WAN outages; and many specialized applications. For example, there is a doctor's office application that leverages router security and router hardware to encrypt patient data and authenticate users via hardware connected to the router. Another application works with oil companies to provide local real-time monitoring and analysis, locally on the router.

If you think about it, it really makes sense to run apps locally, and at the same time, save money because you don't have to have a server. You could choose to transmit low priority data when the network is not busy.

If you want to write your own applications, check out Cisco's Partner Program Web page.

There are three models of the Cisco AXP: two NME cards and one AIM card.

Additionally, there are software SKU's that go with each of these products. They are: AIM-APPRE-102-K9, NME-APPRE-302-K9, and NME-APPRE-522-K9, respectively.

Keep in mind that Cisco isn't the only network virtualization solution out there. While I don't know who actually came first, I have been hearing about 3Com's Open Network (ON) Initiative long before Cisco. For more on 3Com's solution, see eWeek: 3Com Advances Open Network Initiative and the 3Com ON Network.

Why the AXP module is good for your network

I believe that Cisco's AXP solution is just the first wave of network virtualization solutions. Perhaps one day your refrigerator will be running Linux as well (maybe yours already is, I don't know). Still, as Cisco customers, we can only benefit from solutions like these. By allowing us to run specialized industry-specific applications on hardware that may be already in place, we are creating cost savings and efficiencies. Plus, when you consider the power of having network analysis application "on the network and in the routers," those applications are going to run much faster and network admins like us will gain huge benefits. I hope that you will either check out Cisco's AXP solution or at least keep an eye out for some of the amazing network virtualization solutions to come.

For more information on the Cisco AXP, see: