By itself, vSphere 5 can't fully administer your virtualization environment. vExpert Rick Vanover looks at the extras needed to round out the solution.

vSphere administrators need several tools to do their jobs effectively and to gain additional insight into the environment. The good news is that many of the tools are available for free and directly from VMware. Whether it is to manipulate virtual machines from the convenience of your iPad, take an inventory snapshot, or script out a number of vSphere items, the tools are there.

All these tools I'll show are free. But most require VMware vCenter Server, so they can't usually be leveraged by using only the free ESXi hypervisor.

In regard to tablet computing, the iPad is king. The somewhat inconvenient part is that you have to download the iPad Client from the Apple App Store. From there, you need to install the VMware vCenter Mobile Access (vCMA) virtual appliance connectivity broker. But no configuration is required on the vCMA. Simply let it boot up and get a DHCP address. Figure A shows the vCMA downloaded and installed as a virtual appliance. 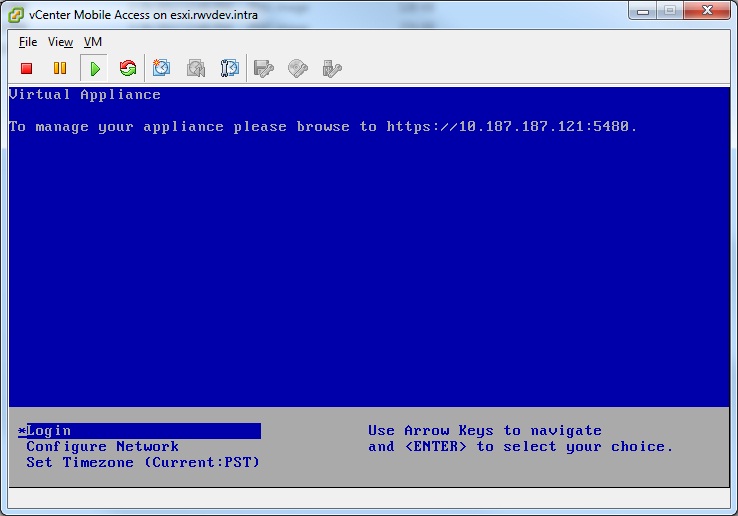 The vSphere Client for iPad can now be pointed to the IP address of the vCMA to log into a vCenter Server system. From here, things like power on, power off, suspend, and other basic tasks are available to administer virtual machines. Also on display are quick and easy views into the virtual machine's basic CPU and memory and disk performance information.

The vSphere Client for iPad won't replace the traditional vSphere Client any time soon, but it will be a welcome addition to the admin on the go or provide a way to watch some real-time behavior of a suspect virtual machine.

VMware Converter is not a tool that's past its prime. There are still plenty of use cases for Converter, including moving VMs outside cluster boundaries and some resizing techniques that can be done only while the VM is offline.

The current version is 5.0 and snuck out last year during VMworld when nobody was watching. It includes support for vSphere 5 but also introduced a slew of new killer features. For instance, it can now import Hyper-V VMs and backup images directly to vSphere virtual machines. Figure B shows this step of the import process. 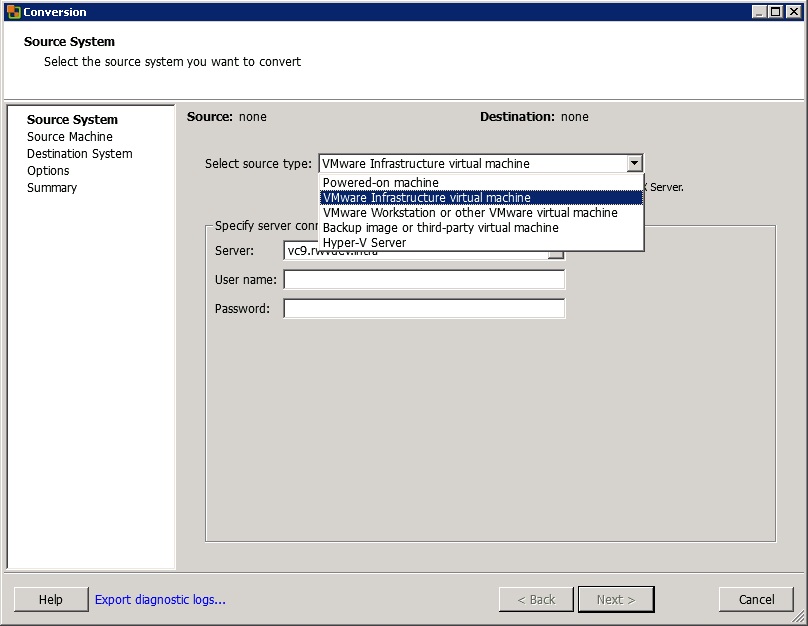 The other critical feature that VMware Converter 5 offers vSphere administrators is the ability to realign block sizes of the guest operating system partition. Previously, systems that were read by VMware Converter and written to a VMFS volume on an ESXi host would incur partition offsets that would cause duplicated read and write behavior, as each offset block was misaligned to the host file system on the VMFS volume. This important option is a default with VMware Converter 5.

The vCenter InventorySnapshot tool allows the current configuration to be assessed and exported via a one-time iteration of the Java applet tool. This is handy for those in the business of creating vSphere labs with complicated cluster and DRS configuration on a repetitive basis. The InventorySnapshot tool will authenticate against the vCenter Server and then gather all objects in the datacenters and clusters. Figure C shows the authentication step. 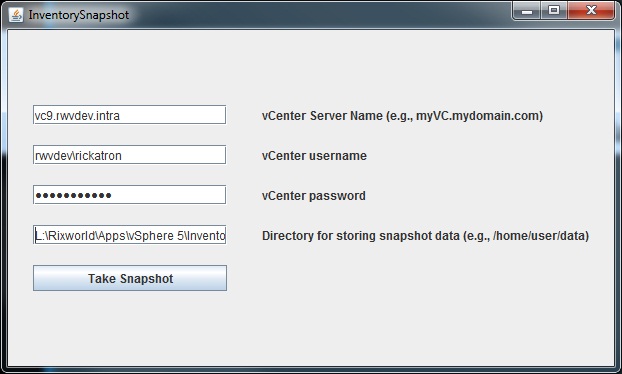 The entire configuration of the cluster objects is reported as a PowerCLI script (the vSphere PowerShell extension). The ability to save this script for rebuilding a cluster can be invaluable in lab situations as well as production environments that may have custom DRS or HA attributes. You can also host password changes within the vCenter InventorySnapshot tool.

Other vSphere objects, such as networks, datastores, and VMs, are represented in the report. Having this exported for later analysis on cluster configuration is also beneficial, especially for production vSphere environments.

The vSphere Client is a bulky install, especially if only for one-time use. The ThinApped client, however, is lightweight and requires only around 168 MB of storage. This makes it perfect to sit with other common tools on a USB drive for quick and easy access when multiple Windows PCs and vSphere environments are used. You know you're running the ThinApped version of the vSphere Client when the ThinApp splash screen appears, as shown in Figure D. 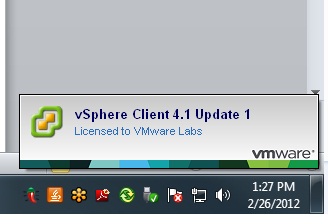 The key to unleashing the power of vSphere is being able to automate tasks that require a lot of repetitive work in the vSphere Client. The VMware vSphere PowerCLI is the answer, as it is a PowerShell extension specifically for vSphere. There also is an incredible community supporting PowerCLI, as chances are someone else is in the same situation as you.

Installing the vSphere PowerCLI is straightforward and you can be up and running in moments. From there, you can leverage some of the great community resources to retrieve data from your vSphere environment. One resource is a very handy post by Luc Dekens on how to determine the IP, hostname, username, and session login for all active vSphere connections. This is different from the vSphere sessions screen, as it tells us only the username, the timing, and whether they are active. Figure E shows the script highlighted in Luc's post being run and immediately giving my useable information. 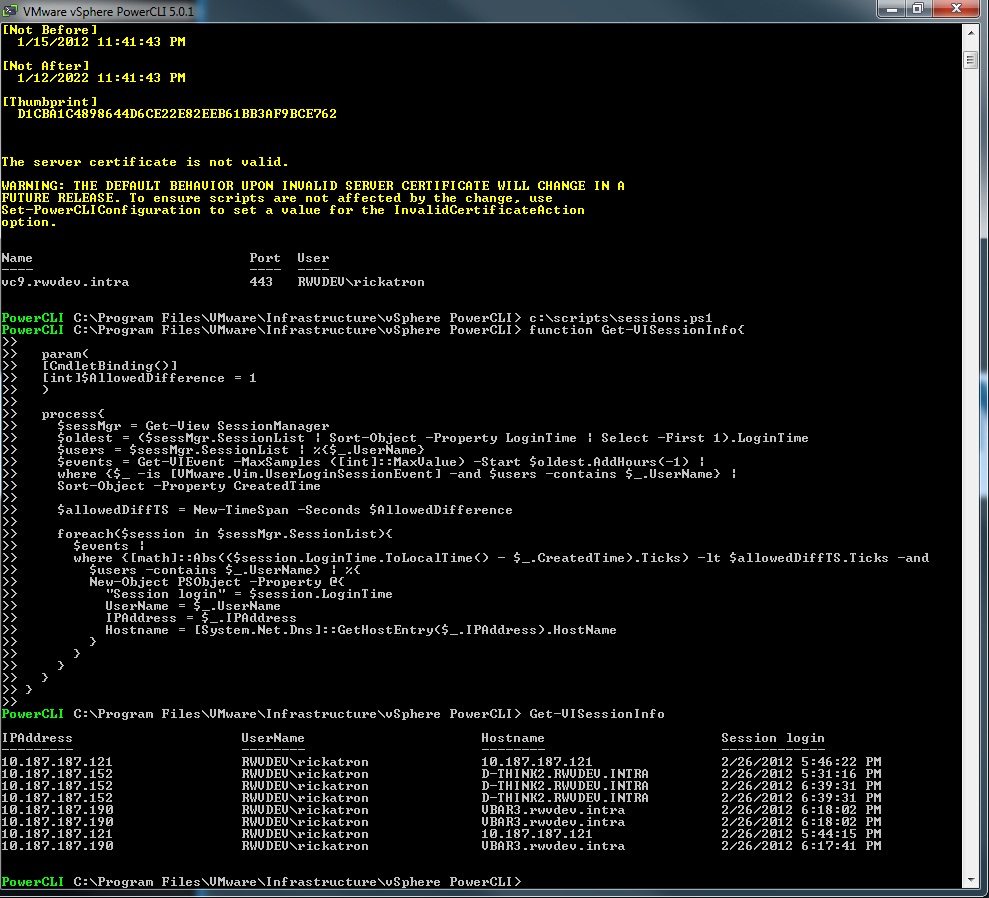 You can run simpler scripts to report the inventory of items such as hosts. You can run them with a one-liner, such as "Get-VM."

vSphere PowerCLI is unique in that you can use it to the level of automation you are comfortable with. This makes it easy to get started, and there are plenty of online resources to help with PowerCLI scripting.

Which tools to use?

Each of these tools will play a part in helping you do about every vSphere task that's required. Are there any vSphere tools that you can't live without? Share your favorite tools below.