New computers are being sold with crapware installed. I don't like it. I doubt that you do, either. Here's what we can do about it.

Crapware is software you didn't ask for and do not want on your computer. Some generic examples are:

Why is it there, then? PC makers cash in big time, that's why. Software vendors pay top dollar to get their trialware loaded on OEM equipment and in front of the user.

It can be more than annoying

To make matters worse, crapware can cause damage. I have a friend who bought a high-end notebook with a solid-state drive (SSD). An aftermarket disk defrag utility was installed and enabled by default. I would have thought companies making PCs would realize you do not defrag SSDs. It shortens their life.

Here are the problems that tag along with crapware:

Another form of crapware is especially annoying. Try installing drivers for printers and other external devices without getting a few extra applications. That goes for updates as well. What does installing a Yahoo Toolbar have to with Java?

What you can do about it

For the most part, this is only a problem for computers that use Microsoft operating systems. I have not seen crapware on systems using other operating systems. That said, let's focus on what you can do to improve this situation.

Microsoft is taking a cue from Apple and selling computers that have zero crapware on them. It removed 15 applications. In this video, Ken Fowles, Microsoft Signature Lab director, explains what is and isn't loaded on a Signature PC.

Some PC makers offer crapware-free computers (Dell Vostro line) or an option (usually for a price) to not have trialware installed. You will have to check closely to find the exact details.

Being proactive and buying a crapware-free computer is good, but you still need to be reactive. I mentioned earlier that software vendors are getting into the crapware act. Printer software is way more than just drivers now. So we have to figure out how to get rid of the unwanted bloatware that piggy-backs on desired software. Fortunately, several free applications do a great job removing crapware. I'd like to describe them and allow you to choose what makes sense for you.

2: Autoruns for Windows by Mark Russinovich and Bryce Cogswell

More often than not, crapware is configured to start when Windows loads. Software developers want to get maximum exposure for their product. Autoruns (Figure A) is a useful app that shows every program that starts at system boot. It checks the startup folder, Run, RunOnce, and registry keys. Autoruns also ranks the programs in the order that Windows processes them, giving you a better idea of their importance. Then, it's just a matter of deciding which ones to keep.

The Autoruns Web site suggests that you select the Hide Signed Microsoft Entries option. Doing so makes it easier to focus on third-party applications. 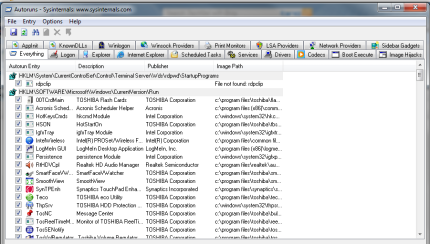 3: CCleaner (but make sure it's the portable version)

CCleaner (Figure B) is not a crapware remover. The developer calls it a system optimization, privacy, and cleaning tool. More simply, CCleaner is known for being a good registry cleaner. It also removes ancillary files that remain behind after a program has been uninstalled. So it should be used as the second wave of a crapware attack.

I almost did not recommend CCleaner. The installed version asks if you want to install what I would consider crapware. That is why I suggest using the portable version. It is not installed and has a minimal footprint. 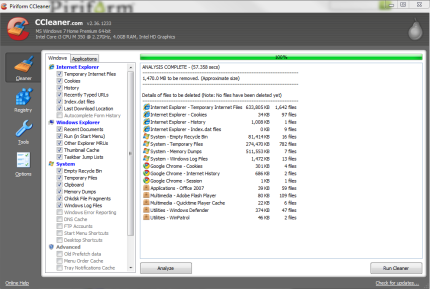 What can I add: The name says it all. PC DeCrapifier (Figure C) is a lightweight, non-installing executable that locates and lists all third-party software and offers you the choice to remove them or not. PC DeCrapifier also creates a restore point. That way, if you make a mistake and remove a valuable application, you have a way back. 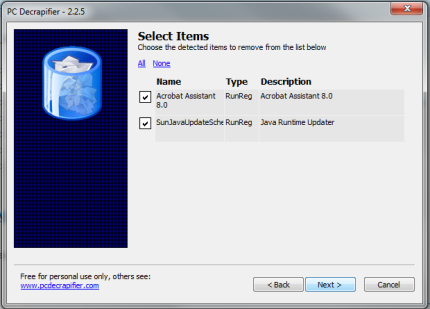 If you had to choose one application to control crapware, I would recommend WinPatrol (Figure D). But not for the reason you think. I feel the aforementioned programs are capable of locating and removing crapware.

What they do not do is help you determine what is crapware and what isn't. The developer of PC DeCrapifier has to be concerned about removing a required file; otherwise, why ask to create a restore point. WinPatrol has a vast database you can query, so you can make an informed decision as to whether an application is needed. 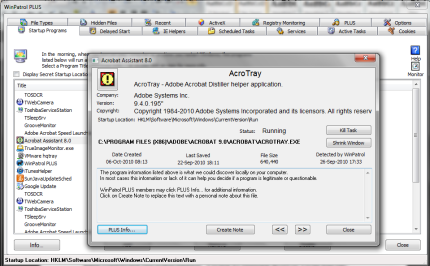 Normally, removing crapware is not much of a problem -- until you start dealing with antivirus programs, specifically Norton. I know people who have purchased its time-limited trialware just to avoid the pain of removing it.

That's not right. Oddly enough, Symantec must feel the pain. It has a special Web site with removal tools for many of its current antivirus products. So if you would prefer using something else, go to this link, grab the appropriate tool, and remove the Norton product.

Crapware is a problem. We get a shiny new computer and it has all this extra stuff. Then we figure out that stuff is affecting how the computer works. My theory is if you aren't using it, get rid of it.

I would like to ask you a favor. I don't like the term crapware. Do you have a better term? If you do, please share it.

[Editor's note: Jump over to this poll if you want to vote for your favorite alternative name among Michael's top picks.]