When you need a bit more functionality than Print Screen and Paint offer, one of these screen capture tools will come in handy.

Screen captures aren't just for tech writers anymore. If you support users, you probably need to capture screen shots occasionally. When needs are simple, you can probably get by with Print Screen and Windows Paint. If you're using Windows 7, try Snipping Tool. But if you want serious control or more polish, you need something more powerful. Any of the following apps should fill most needs.

Inbit's award-winning FullShot has been around for a long time. (I was using it back in the early 90s.) It's probably one of the more comprehensive packages, offering a number of flexible capturing scenarios and hotkeys. Its interface generates a bit of a learning curve, but it's worth it. You can easily control size and resolution. Effects are adequate and easy to add. For instance, the tear effect shown in Figure A requires only a single click before the capture, and you can adjust its attributes. Capture tools let you shoot the entire screen all the way down to a section of a toolbar. You get what you want, and this software supports a large range of image formats. You can set defaults that accommodate your needs and use hotkeys and SWORD buttons, which are probably its most appealing feature. 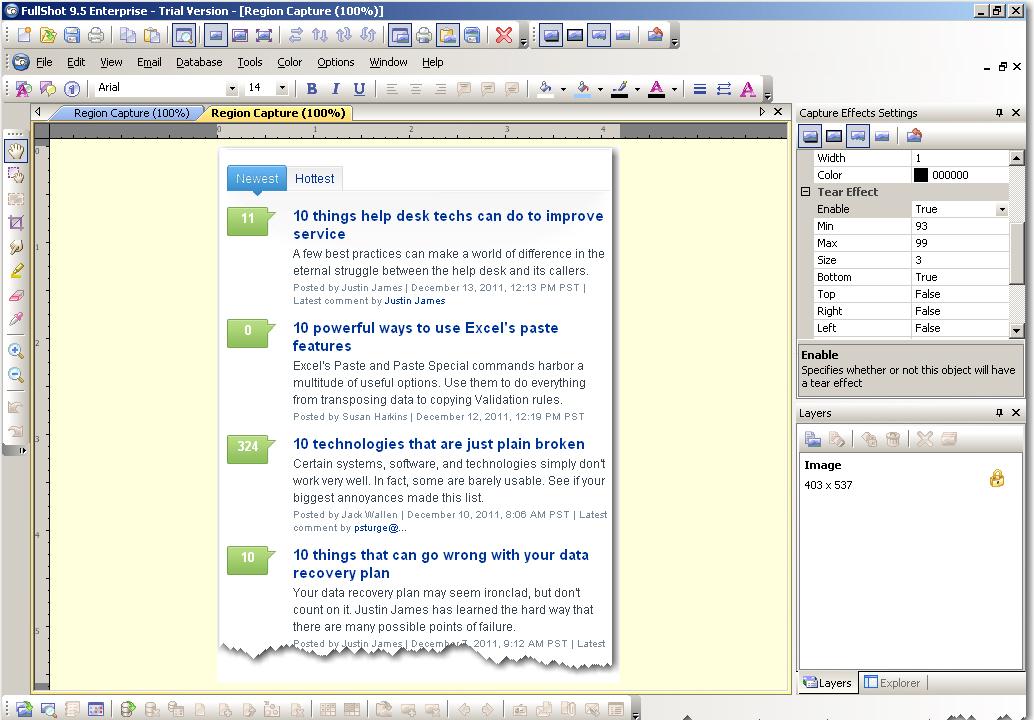 FullShot's interface has a lot of options, and special effects like this one are easy to add.

FullShot is priced reasonably, from $49.99 for the standard version to $149.99 for enterprise licensing, and Inbit offers a 30-day trial. FullShot 9 is a 32-bit app, but it's compatible with both Windows 7 and Vista 32- and 64-bit systems (according to the publisher). It works in almost every version of Windows, from 7 to 98.

SnagIt by TechSmith captures full screens, partial screens, or an entire scrolling area (which is really cool). Its freehand capture tool is impressive. Region capture is a bit awkward at first, but it's easy to use once you get the hang of it. Besides traditional screen shots, SnagIt can copy Web sites, text, and even video. You can record your screen's action using AVI format, annotate, resize, change coloring, and more. Editing and effects tools are more than adequate for the average user. Figure B shows a curled edge effect, which required a single click. Like FullShot, there's a bit of a learning curve, which is complicated somewhat by the interface. There's nothing wrong with it, but it's not as intuitive as you might like. 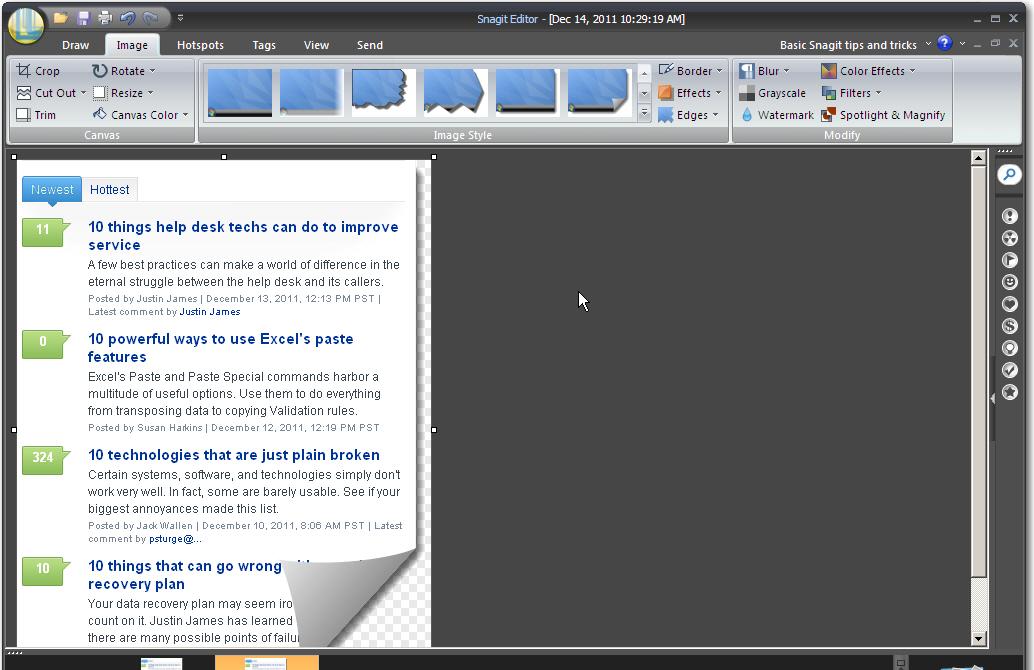 The help system isn't terribly useful, either. For instance, a search on "shadow" turns up nothing. That's because shadows are an edge effect. The help's there, but if you don't know the shadow attribute is an edge effect, you might wander around for a bit before you find what you're looking for. Also, SnagIt usurps your system's Print Screen button as the default hotkey. You can go into Program Preferences to change that if it's a problem for you.

SnagIt is compatible with Windows 7, Vista, and XP, and there's a Mac version. At $50, Snagit is comparable to FullShot. TechSmith offers a 30-day trial.

CaptureWizPro from PixelMetrics is extremely popular with users; you can capture or record just about anything on your system quickly and almost effortlessly. Simply drag the mouse to select an area and choose an appropriate output, which includes saving in a traditional format, sending to the printer, or initiating an email with the capture as an attachment. You can also let the predictive capture tool capture the entire window or individual components, even extended scroll areas. You can capture audio and video -- it's a comprehensive capture package that's easy to use. If you need special effects, however, skip this one. Effects are limited and it uses Windows Paint as its editor.

The toolbar, shown in Figure C, sits on the desktop ready to use and supports hotkeys. For simple screen captures, it's perhaps the easiest of all five to use. This software also lets you capture multiple regions at once, which is a helpful capability for the right users. 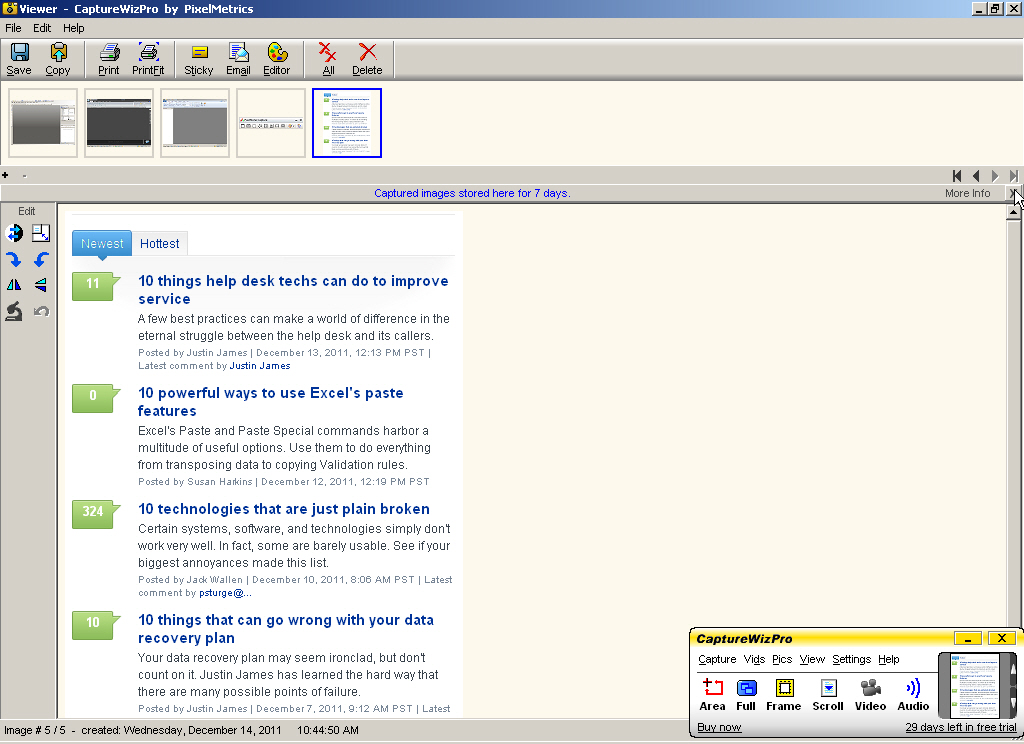 Click this program's icon in the tray to launch its toolbar and start capturing.

Another easy-to-use capturing program, HyperSnap from Hyperionics, offers super-precise capturing control and cropping capabilities. The interface is simple and there's a full set of options for working with color and resolution. It isn't as robust as FullShot or Snagit, but its interface is friendly. A single click converted the image shown in Figure D to gray scale. And via the capture settings, you can specify capture shapes other than the basic rectangle. 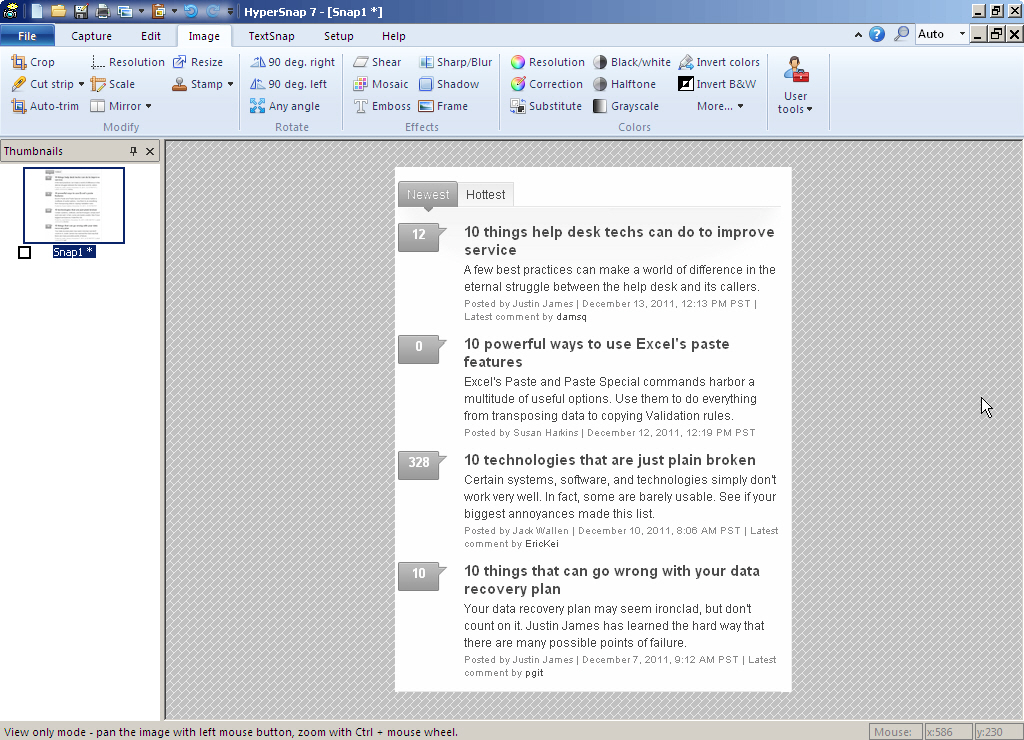 Converting this image to gray scale required just one click.

FastStone Capture offers a full set of tools and capturing capabilities. You can capture anything -- windows, objects, menus, scrolling windows, and freehand regions. Like CaptureWizPro, it starts with a simple toolbar and displays an interface that's easy to use. Editing tools allow annotating with text, adding arrows, highlighting, resizing, cropping, applying a few special effects, and more. Figure E shows a faded edge effect, which required just a couple of clicks. You can also record screen actions and sound. All these features are easily managed by hotkeys. The one capability I require that's unsupported is the ability to resize images to specific percentages. You can resize, but you're limited to preset standards. 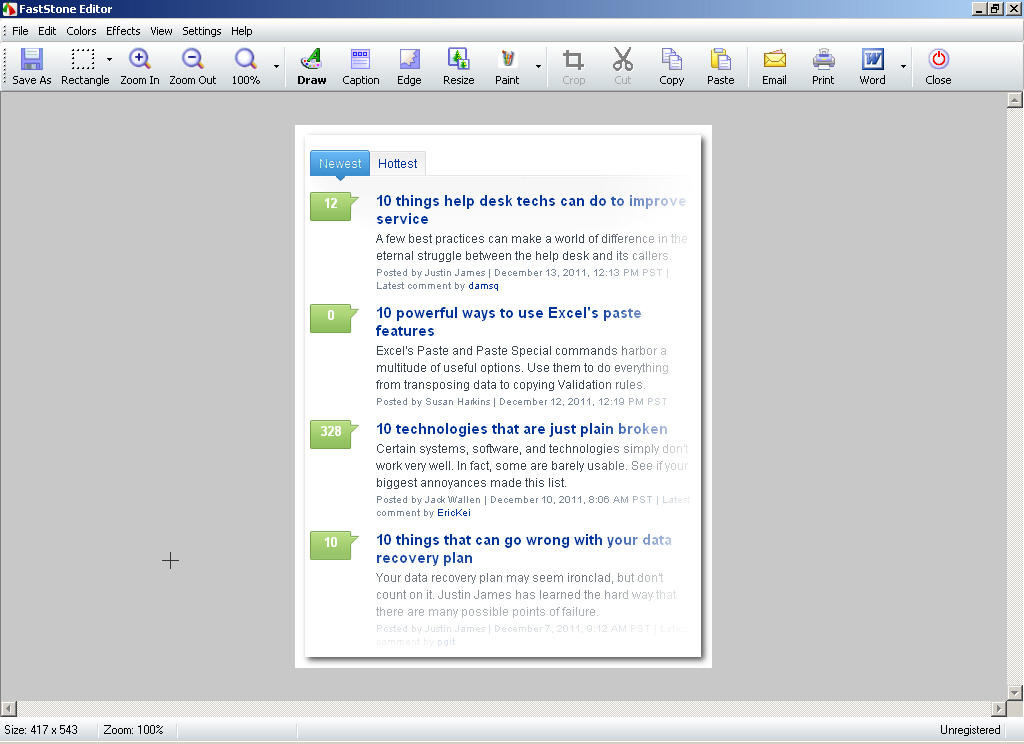 Choose a capture from the toolbar and go.

This tool costs $19.95, and it offers a free trial. Considering everything FastStone Capture can do, it's a bargain at that price.

Do you have a favorite screen capture app that didn't make this list? Share your recommendations with other TechRepublic members.