Wondering what happened to your favorite sci-fi characters after their heyday in Hollywood? Here's a tongue-in-cheek look at where Gort, the Tribbles, and other characters are now. 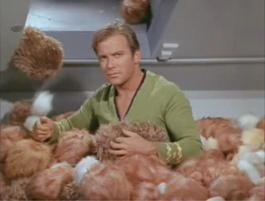 Ever wondered what happened to your favorite science-fiction characters after their heyday in Hollywood? In the TechRepublic gallery Sci-fi characters: Where are they now?, our Head Blogs Editor Toni Bowers offers a tongue-in-cheek look at where some of the characters are now.

For example, here's her caption about the Tribbles: "The seemingly adorable furballs from the vintage series disbanded after their last appearance on the show. While most members dropped out of the public eye, some have gone on to become stunt hairpieces for Justin Bieber and Rob Blagojevich."

Roy Neary from Close Encounters of the Third Kind, Gort, and Jabba the Hutt are some of the other characters featured. One character in the gallery is probably not your favorite sci-fi film character. Care to guess the character's name?