New to World of Warcraft this year is a Thanksgiving-themed holiday called Pilgrim's Bounty. Geekend contributor Wally Bahny tells you what it takes to earn the Pilgrim meta-achievement. 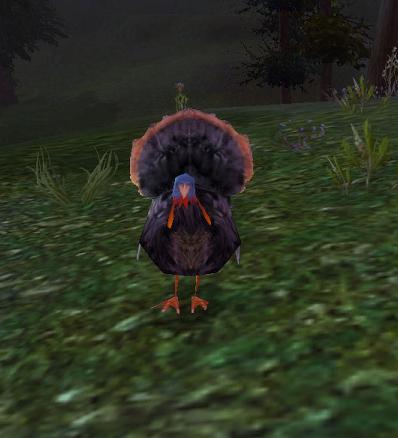 New to World of Warcraft this year is a Thanksgiving-themed holiday called Pilgrim's Bounty. Running from Nov. 22, 2009 - Nov. 28, 2009, Pilgrim's Bounty is a collection of nine achievements (with some duplicated for each faction) leading to one meta-achievement: Pilgrim (Horde, Alliance), which includes the "Pilgrim" title and a Plump Turkey pet.

To begin, head to any major city and find a commoner; in faction cities, these will be members of that city's race. In Shattrath, goblins will be the commoners, and in Dalaran, there will be a mix of goblins in the sewers, humans near the alliance sections, and blood elves near the horde sections.

Once you find a commoner, take their quest and then progress to the nearest faction town to begin the holiday celebration. Just outside of every faction town, you will see two tables with five seats, several NPCs, and some barrels of supplies -- pick up any quests you see. Most quests will require the cooking of various holiday-themed foods; you can obtain the recipes for a nominal fee from either one of the NPCs or any of the barrels of supplies. Also, those vendor points contain some of the materials you'll need to make all of the Pilgrim's Bounty food. Some of the food materials are race-specific, so you'll need to visit the Undercity, Orgrimmar, Thunder Bluff, and Tirisfal Glades to obtain the entire list of materials. The race-specific materials are as follows:

The other recipe to make is spice bread stuffing; all of the materials can be purchased from the previously mentioned vendor and barrels. You'll need to buy enough of each material to make approximately 30 of recipe for the first day; any subsequent days will require 20 of each item. Once you make enough of each recipe to turn in for each of the five daily quests you picked up, you'll be 22% of the way to being a full pilgrim. Those achievements are Now We're Cookin' (Horde, Alliance), and Pilgrim's Progress (Horde, Alliance). Also, while turning in those daily quests, make sure you pick up a Pilgrim Hat, one of the chest pieces (either Pilgrim's Attire, Pilgrim's Dress, or Pilgrim's Robe), and eight Turkey Shooters. As there are only five daily quests, you'll need to take two days to get all of it. 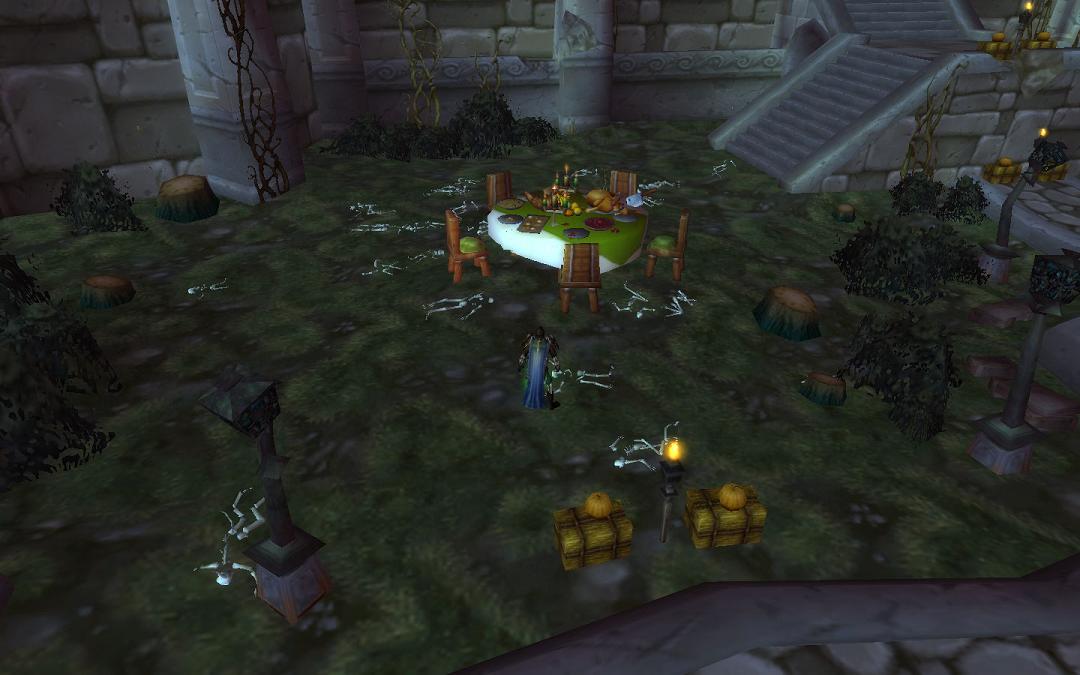 While you're visiting each major city, you'll need to set at a Bountiful Table and eat five of each food available there in order to get the Pilgrim's Paunch achievement (Horde, Alliance). Also, make sure you sit at a different seat each time so you can pass each type of food for Sharing is Caring. While you're working on Sharing is Caring, you should also get FOOD FIGHT! You can find other bountiful tables at many smaller towns throughout Azeroth.

The next thing to work on is The Turkinator. With this achievement, you must kill 40 wild turkeys that are roaming all over Tirisfal Glades and Elwynn Forest. The catch is that each consecutive kill must follow the previous kill by no more than 25 seconds. If you try this during peak times, it's going to be tough. I did this at 8:00 A.M. one morning, and it worked well. This achievement will give you more than enough wild turkeys for the necessary cooking.

Next, as you acquire Turkey Shooters, hunt down a rogue of each possible race (Human, Orc, Undead, Dwarf, Night Elf, Troll, Blood Elf, and Gnome) and shoot them to get Turkey Lurkey. Finding rogues of the opposing faction will be tough for lower-level characters, but anyone with access to Dalaran should do okay.

The second-to-last achievement is Terokkar Turkey Time. You complete this achievement by running the Sethekk Halls instance in the Auchindoun area of Terokkar Forest in the Outlands. For a level 80, this should be -- if not soloable -- easy enough to do as a pair or as a small group. A group of five level 80s should make short work of this level 70 instance. All you have to do is kill Talon King Ikiss (pronounced "eye-kiss") while wearing the aforementioned hat and chest-slot item.

Finally, don the hat and chest piece again and head to each Alliance faction-specific city to sit at a Bountiful Table. Doing this at each city will yield the ninth and final achievement for Pilgrim's Bounty: Pilgrim's Peril (Horde, Alliance). Depending on when you do this achievement, it could be fairly simple (say, at 8:00 A.M.) or very difficult (say, at 8:00 P.M.).

Unlike most holiday achievements, Pilgrim's Bounty requires players to have upgraded to at least Burning Crusade to complete. As newly purchased boxed games now come with WoW Classic and Burning Crusade together, and the online upgrade is fairly cheap, this is probably a moot point, but I wanted WoW players to be aware of it.

Have you tried the Pilgrim's Bounty quests and holiday events? If so, what did you think?