If you have a diehard Star Trek fan on your holiday shopping list, you'll want to read Scott Lowe's review of the Klingon Language Suite, which is a collection of three iPhone applications: the Conversational Klingon app, the Klingon Dictionary app, and the Klingon Phrasebook.

The Klingon Language Suite is a collection of three (wej) iPhone applications -- the Conversational Klingon app, the Klingon Dictionary app, and the Klingon Phrasebook -- from Simon & Schuster. The Suite costs $11.99, although you can purchase each app separately. Here's a look at the capabilities of each application.

For a Star Trek geek, the Conversational Klingon app is pretty fun. Michael Dorn (aka Worf from Star Trek: The Next Generation and Star Trek: Deep Space Nine) provides voiceover narration, which gives the app some authenticity. After all, Worf was a Klingon extraordinaire -- well, except for that whole discommendation incident.

The Conversational Klingon app provides an overview of the Klingon language, starting with an introduction to how words in the Klingon language are pronounced. After Michael Dorn's introduction is complete, another voice continues the lesson, providing specific instructions on how to manipulate your mouth, tongue, and air flow to make sure you correctly pronounce common word constructs. The narrator points out that simply reading Klingon words as if they were English would be a mistake, as the basic language construction is quite different. Throughout the lesson, the narrator helps you understand some modifiers in the Klingon language that can vastly change the meaning of a word. Take, for example, the word tI which, in Klingon, means vegetation. By simply adding an apostrophe to the word -- tI' -- it now means to repair.

As the narrator pauses between lessons, Michael Dorn's voice occasionally comes back in to encourage success and sometimes to introduce the next part of the lesson.

Once very basic word construction is complete, the lesson moves into how you can ask simple questions in Klingon. For example, if you're traveling to Kronos or to somewhere else where Klingon is the language of choice, the chances are good that you will ultimately need to make use of a restroom. To find one, ask "nuqDaq 'oH puchpa' 'e'?" The app helps you to understand word pairs, such as early and late, which translate to ‘eq and paS in Klingon. (See Figure A) Figure A 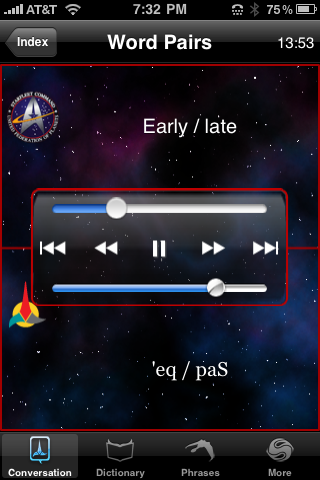 The Conversational Klingon app also includes lessons about: the proper use of pronouns and numbers, telling time, making purchases, renting hotel rooms, getting food, and what phrases are important to understand in the event of an emergency. One of the other lessons includes phrases that can be useful in the local bar. (See Figure B) Figure B 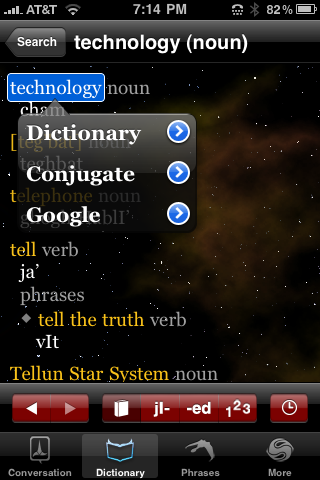 Choose from these three options for any tapped word.

As you work your way through the lessons, the audio is accompanied by a transcription of the spoken text in English and Klingon. If you really want to get syntax and pronunciation down and understand how Klingon differs from English, this overlaid text is of great assistance.

The app works using a typical listen and repeat learning method -- you hear the words and then have the opportunity to repeat them. If you missed a particular word or phrase, the app allows you to rewind to any point you like. (See Figure C) Figure C 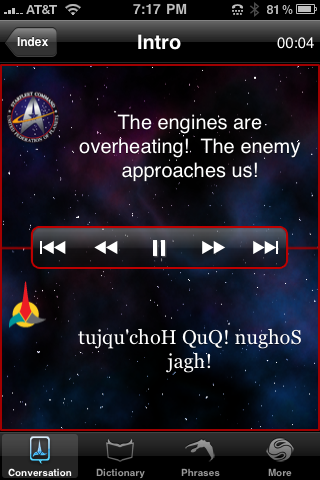 Use the onscreen controls to pause, fast forward, and rewind.

You can purchase this app separately for $3.99 from iTunes.

According to the Simon & Schuster site, the English-to-Klingon and Klingon-to-English dictionary portion of the suite includes more than 1,000 entries, which is relatively paltry. Heck, TechRepublic isn't even in the dictionary! (smile)

In Figure D, you see what you'll get when you look up the word Klingon. Figure D 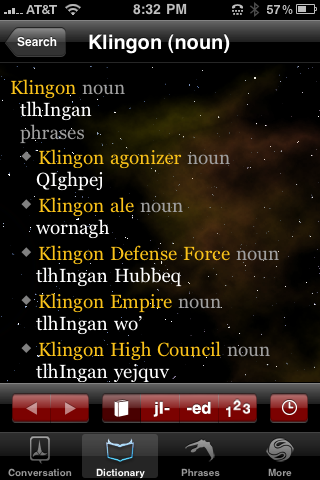 I know this isn't a real dictionary, but a lot of words that I was hoping to see, such as Andorian are not included (Figure E). For instance, you won't find the words cow, snake, traffic, or corn in the English-to-Klingon dictionary. I did stumble across field (yotlh), cloud ('eng), computer (De'wI'), and some other common words, though it is hit and miss. (I wonder if cloud computing be loosely translated as 'eng De'wl'.) The dictionary does contain some phrases, such as test conclusively (tob), warp field (pIvchem), and fighting technique (tonSaw'). Figure E 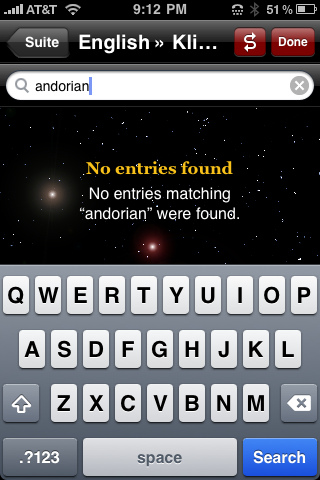 Alas, Andorian isn't a part of the Klingon lexicon.

For the true Klingon language diehard, the dictionary includes a verb analysis screen, which shows you how a word can be broken down into its constituent parts. The dictionary also includes a number of screens of grammar references to help geeks who are just starting to learn Klingon along in understanding language syntax and modifiers. (See Figure F) Figure F 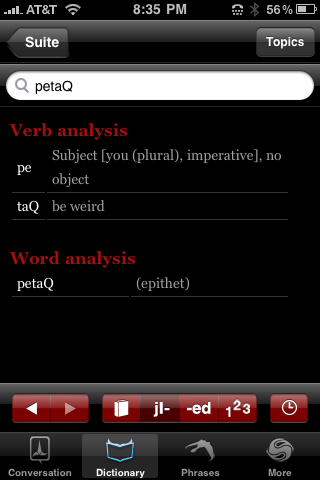 A break down of a colorful Klingon word. 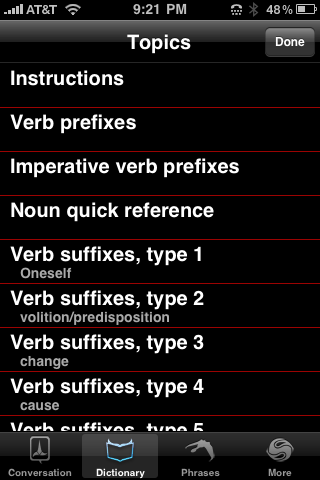 A number of grammar topics are included.

If you tap the word you're looking up, you get a list of options, including Dictionary, Conjugate, and Google. Frankly, I couldn't figure out why Dictionary is an option since you're already at the dictionary; this doesn't appear to serve a purpose. The Google option does exactly what you would expect -- that is; tap Google and Safari opens and performs a search of the selected word.

The Conjugate screen shows conjugation/tense forms for any supported English word (Figure H). Even though this didn't help me with the Klingon language, I found it sort of neat; however, I doubt that I'd ever walk into an executive committee meeting bragging about how I perfected my report with the assistance of the Klingon Dictionary. Figure H 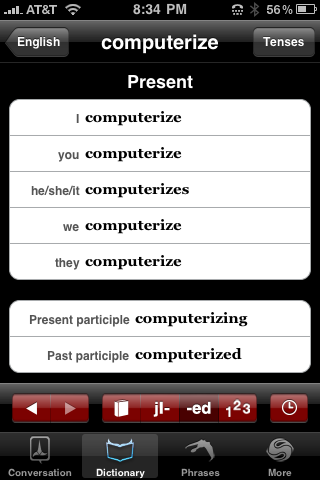 The word computerize in present tense.

You can purchase this app separately for $9.99 from iTunes.

The Klingon Phrasebook helps you to go beyond individual words and learn phrases in the Klingon language. With both English-to-Klingon and Klingon-to-English phrases, those fluent in Klingon can hear what certain phrases sound like in English. Icons next to both the English and the Klingon phrase invite the user to tap the icon to listen to that particular phrase. 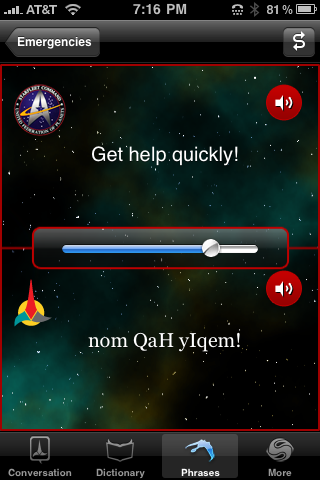 The phrasebook is really nothing more than a bunch of phrases; there is very little in the way of additional features. Overall, this part of the app is pretty weak; I'm not surprised to see that this app by itself only costs $0.99.

For pure geeky fun, the Klingon Language Suite is worth $11.99, but I'm not sure that too many people beyond real Star Trek diehards will want to shell out the money for this app suite. Also, you can't actually give this suite as a gift -- you would need to purchase the recipient an iTunes gift card and then clue them in to this ubergeeky superapp.

Check out my gallery of images from the Klingon Language Suite for a closer look at this geek gift.