Andy Moon says Halo: Reach is a must-have for any fan of the FPS genre. Find out what he finds so impressive about the latest release in the Halo series, as well as his one minor quibble about the video game.

The Halo franchise added another title to the series this week with Bungie's release of Halo: Reach. I was counting the days for this release because the Halo series are some of my favorite games, and Master Chief is my all-time favorite video game character.

Halo: Reach is the story of Noble Team, a group of six genetically engineered Spartan class soldiers, the same kind of soldier as Master Chief, the protagonist of Halo 1, Halo 2, and Halo 3. The previous installments of the Halo series took up the fight between humanity and a religious alliance of alien species called the Covenant. This chapter is a prequel to the series, and its events take place as humanity learns that it is at war with an alien menace that is capable of wiping out the human race. 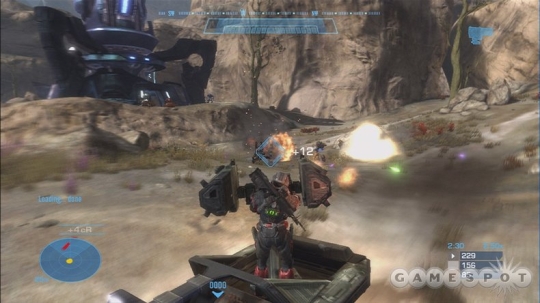 The Active Roster and queue joining are welcome additions to the Halo multiplayer experience. With Halo 3, you had to check on your friends over and over, watching the time count down on their game. With Halo: Reach, you can join a queue that will put you in their lobby as soon as their game ends; this means no more spamming your friends with invites, hoping they will remember to invite you when they finish.

The connections options have been revamped, and there are new social settings that allow you to specify the kind of experience you like. You can define your level of chattiness, competitiveness, teamwork, and tone so that you end up with the same kinds of player that you are.

The improved voting system has been tweaked since the Halo: Reach beta. A menu is displayed before the game starts, giving the player the ability to vote for one of three gametype/map combinations or none of the above. This makes it much easier to get a gametype that the majority of the room will find enjoyable.

My favorite thing about Halo: Reach is the ability to create games that suit you. The new version of Bungie's sandbox editor is impressive in its scope. Forge World, a map five times larger than any you have seen in a Halo game, provides incredible variety in the types of locations on which to build. From an empty room perfect for Grifball to a large canyon with caves, side paths, and cliffs, there is an environment to suit nearly any one's creative vision.

For anyone who never played Halo: ODST, in the firefight game mode, wave after wave of Covenant forces are hurled at your firing squad. This mode provided a number of memorable moments for me in the past, and it is sure to do the same in the future. The entire system has been revamped for the Spartan program, put into matchmaking, and promises to be a wild ride.

Overall, the Campaign was mostly what I expect from a Halo game. It was a challenging FPS experience with very few of the repetitive battles that marked Halo: CE and Halo 2. The enemies were definitely ramped up and more difficult to kill in Halo: Reach than in any previous Halo title, leading me to believe that Noble Team took out the majority of the veteran Covenant forces before the events of Halo: CE took place.

The armor abilities added a refreshing dimension to the Halo gameplay experience; it was nice to be able to sprint up to an enemy with their back turned to get an assassination, complete with special video sequences. The jet pack is very useful for getting to elevated positions without looking for stairs; armor lock is great when you are on the verge of dying; and the hologram makes for an extremely effective diversion.

The AI for opposing forces is really good, especially on the more difficult levels. On Legendary (the most difficult setting), forces split and go to opposite sides, flanking the player at every opportunity and removing flanking as a viable tactic throughout most of the campaign. At the beginning of the game, Noble One, the team leader, tells you that the "Lone Wolf" stuff won't fly with Noble Team, which is great advice -- stay with the team so they can support your efforts at killing all of the enemies on the battlefield.

The Daily and Weekly Challenges should keep a higher number of people engaged for a longer time with Halo: Reach.

Despite the fact that it was a direct part of the storyline, I felt like the space fighting sequence was out of place and a little boring. Halo is supposed to keep your blood pumping the entire time you aren't watching a cinematic sequence, and I found the dogfighting sequence to be a bit slow. This is probably because I have an affinity and appreciation for good flight simulators (this is because my father is a pilot who wrote simulators for fighters and even the space station), and this one is good but not great. It's not surprising since flight sims are outside of Bungie's wheelhouse, but that is the biggest quibble I have with the Campaign.

If you are a fan of the FPS genre, then Halo: Reach is definitely a must-have, especially because the video game has more replay value than any FPS I have seen. And if you like creating games based on the FPS model, you couldn't ask for a better engine than Halo: Reach. The amount of customization available in Forge, the map editor, and Custom Game modes is incredible and will allow the Halo community to come up with some awesome creations, from map remakes to completely new gametypes. Bungie promises it will eventually include community-created game modes and maps, as it did with Grifball and maps like Utah Mambo in Halo 3.

If you are not yet a fan of the Halo series, there's no reason to buy Halo: Reach in an edition other than Standard; the more expensive offerings only give you collectible and commemorative additions to the game. Also, if you won't be logging on to take advantage of the incredible increase in multiplayer options (where you can even get placed on a team with which you can go through the campaign), then I recommend that you rent or GameFly this title -- it will be worth the 12 or so hours it takes to go through the story (I finished with one friend in 10.5 hours on Legendary).