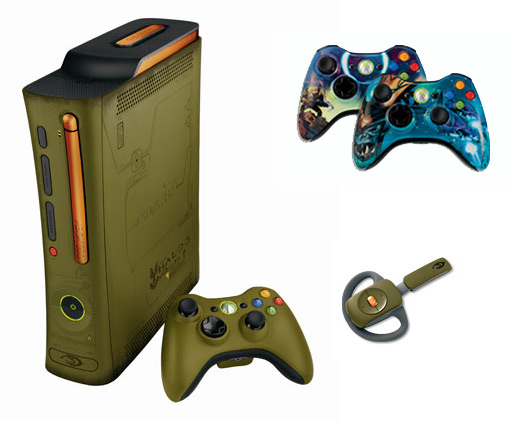 The above image is the Xbox 360 HALO 3 Special Edition console, complete with a 20-GB hard drive and a system architecture that ostensibly won't eat itself, which is important since nearly every regular Xbox on the shelf right now is defective.

Unless you shelled out $479 for the Xbox 360 Elite (which comes in black and boasts 100-GB extra drive space), you'll either be counting the days until your Xbox breaks down or simply buying the theme edition when it appears in your local Best Buy. No word yet on whether the Simpsons Movie Xbox 360 is also doomed to an early death, but since there are only 100 of those, you probably weren't going to take it out of the packaging anyway.

I'm sure Microsoft is secretly hoping that the HALO fanatics (which is a HUGE chunk of the Xbox audience) were waiting for HALO 3 to buy the console and thus won't have bought any of the time-bomb early versions. The HALO 3 theme version is in some sense Microsoft doubling down on this hope.

Extra points to anyone who can point out the faulty components in our Cracking Open the Xbox 360 gallery. I'd love to be able to pretend I know something about electronics when my family finally notices the Xbox announcement on Headline News. It's the little things that make life worthwhile.

Jay Garmon has a vast and terrifying knowledge of all things obscure, obtuse, and irrelevant. One day, he hopes to write science fiction, but for now he'll settle for something stranger -- amusing and abusing IT pros. Read his full profile. You can a...