In his Ancient DOS Games reviews, Kris Asick focuses on where to get the classic games and how to make them work on modern computers.

DOS games are a distant memory for most gamers, but not for Kris Asick, who brings the classics back to life with his clever reviews of these games from the 1980s and mid 1990s on his website Ancient DOS Games.

Matt: Hello, Kris and thank you for accepting this interview opportunity. Can I have a bit of your background so our audience will get a good idea about you? 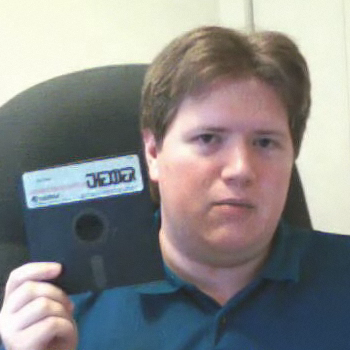 Kris: Well Matt, I happen to be Canadian and have spent most of my nearly 30 years of life in various parts of southwestern Ontario, though I've also spent some of my childhood and teen years in Texas and Florida in the USA. I primarily grew up playing and making games of various sorts, so game design is what I'm best at and it's what I would *like* to do for a living, but I've had to draw on my other talents for the time being until I can really make my mark. (Kris is pictured at right.) Matt: So why do you like old DOS games so much? Kris: Why not? *laughs* Seriously though, old DOS titles are hugely nostalgic for me since my very first experience playing video games at home was on an old Tandy 1000 SX computer, which I still have and which still works... for the most part. They represent a very different approach to games since old DOS computers weren't designed the same way as game consoles, despite the fact that the computers were more powerful and had more memory. This is why at first, all the best 3D games were on computers and all the best side-scrolling games were on consoles: Different paradigms. It also was an open playfield for game creators as anyone with any programming know-how could make a DOS game; there weren't licensing restrictions like there were (and still are) with consoles. Matt: Considering how many other game reviewers are out there on YouTube, what makes your creations so unique and exciting when compared to them?