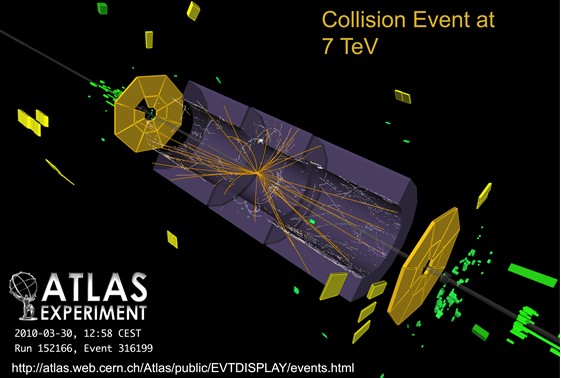 Since the beginning of 2010, the scientists working on the Large Hadron Collider (LHC) at CERN in Geneva have been circulating beams of protons at 3.5 TeV (teraelectron volts); this marks the highest energy per beam that the collider has sustained. As I stated in my post about CERN restarting the LHC, this was CERN's goal for the first part of this year. Yesterday, after two unsuccessful attempts, scientists at CERN finally achieved what they had been building up to these past several months -- the collision of those two beams operating at 3.5 TeV!

The next task is to collide two 3.5 TeV beams repeatedly for the next 18 to 24 months to finally be able to run the experiments for which the collider was built. Once this has run its course, the plan is to increase the energy to 7 TeV per beam for total collision energy of 14 TeV. This is where scientists really hope to really understand quantum theory, find the Higgs Boson, and maybe learn a bit about the Big Bang.

For more details, check out the LHC Web site, the photo gallery entitled LHC's biggest collision yet, and this CNN video about the experiment: