The MythBusters Tour doesn't disappoint when it comes to showcasing outrageous and entertaining science experiments.

MythBusters hosts Adam Savage (@donttrythis) and Jamie Hyneman (@JamieNoTweet) brought the MythBusters Behind the Myths Tour to Louisville, KY, last weekend, and I was fortunate to attend the event. Fans were treated to an evening of science experiments and demonstrations that featured a bed of nails, a feat of strength, high-speed camera hijinks, an explosion, and much more. The family-friendly event also included lots of audience participation (kids and adults joined in the fun onstage), Q&A sessions with each host, and video footage of explosions, accidents, and a behind-the-scenes tour of their set.

The hosts briefly talked about their backgrounds. We learned from Jamie that the origins of the popular Discovery Channel TV show go back to Blendo the Battlebot, which the audience got to see. Adam talked about his love of costume-making and never underestimating the importance of playing with things.

I don't want to give away too much about what you can expect if you go to one of the remaining shows in the United States or Canada and spoil the elements of surprise, so I'll just offer highlights from the hosts' Q&A sessions with the audience.

They mentioned The MythBusters: The Explosive Exhibition at the Museum of Science and Industry in Chicago from March 15 - September 2, 2012 and plugged their new site called Tested. In their welcome to the site video, we learn Tested will cover art, science, technology, blowing stuff up, and more, and Adam and Jamie will be able to delve deeper into topics there than they can on TV. They also introduce Tested curators, producers, and video hosts Will Smith (@willsmith) and Norman Chan (@nchan). Examples of what you'll find on Tested include:

Both hosts did a fantastic job of connecting with the audience -- Adam with his still boyish sense of wonder about what he does for living, and Jamie as the straight man, who seemed like he was especially having fun when he channeled Gallagher. I imagine that a number of kiddos and possibly some of adults left the event with new dreams of studying science as a career. They ended the fun evening with their important motto: Don't try this at home! 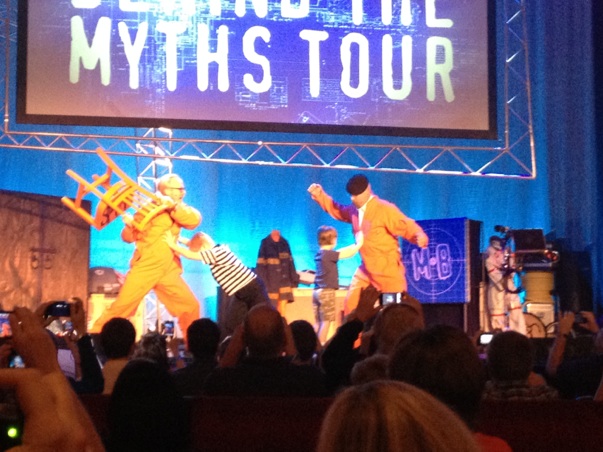 Adam stated there is no shortage of show ideas; he referenced one study's findings about men acting dumber if women are nearby or even if they think they can see them as one idea he might like to test. What myth would you like to see Adam and Jamie try to bust? What is your favorite MythBusters episode? Share your ideas and episode picks in the discussion.

Thanks to The Louisville Palace for providing me with tickets to this event.