I'm a big fan of video games from the '80s, so when I came across this News.com story today, it made me feel a little nostalgic for days of old: "Roomba takes Frogger to the asphalt jungle." I confess that there have been a few dreadfully dull afternoons at work when I've hopped on over to http://www.80smusiclyrics.com/ to play Frogger, as well as a few other classic '80s games, such as Pacman, Asteroids, Donkey Kong, Pong, and Space Invaders.

What could be better than playing the Frogger video game? In true geek form, Phillip Torrone and Limor Fried created a modern version of Frogger--called Roomba Frogger--that they manuevered across the street, dodging traffic in front of the Driskill hotel in Austin, TX. "Torrone and Fried have taken a production Roomba, an autonomous robot vacuum cleaner from iRobot, and modded it (attaching Styrofoam cups to serve as legs and wrapping it in a frog-green T-shirt) so that it is Bluetooth-enabled and controllable from a laptop computer."

"Everyone thought the Roomba would suffer a quick death, but it is far more resilient than anyone expected. Car after car zooms by, and many roll directly over the robot, which manages to avoid getting hit by the wheels... But on about the 10th trip--15 minutes into the game and after crossing a total of 40 lanes of traffic--a white Toyota 4Runner approaches and, unable to avoid the robot vacuum cleaner, crushes it."

I would have loved to have been there, either watching from the balcony of the hotel, the sidewalk, or passing by in a vehicle - or even better, to have controlled Roomba Frogger via the laptop! 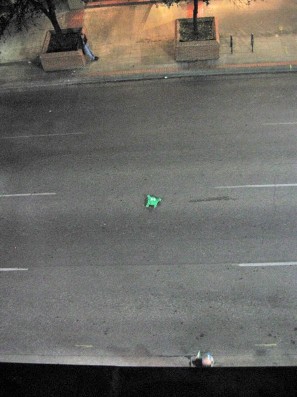 Check out the entire photo gallery: Roomba does Frogger rumba.