After absorbing heavy losses in 2002 and 2003, IT employment in the U.S. started picking back up in 2004 and the trend accelerated in the second half of 2005 to the point that the numbers finally exceeded the highs from 2001, according to the January 2006 report from the National Association of Computer Consultant Businesses (NACCB).

Mark Roberts, CEO of NACCB, said, "In light of the downward pressure on IT employment following Y2K, the bursting of the Tech Bubble, the 9/11 terrorist attacks and the 2001 recession, I am heartened by the 2005 employment figures evidencing strong employment growth in IT" 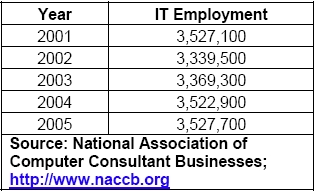 And the NACCB's February 2006 numbers show that IT employment grew again in January, which has the trendline for 2006 looking strong. 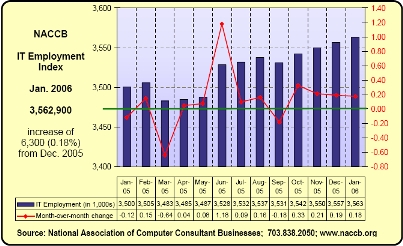