Last October, Dell announced its plans to release a 19-inch wide-screen notebook in 2006: "Ready for a 20-inch laptop?" I also discussed the novelty (and possible awkwardness) of these ginormous models in a previous blog: "Making a case for and against 'bigger is better'." Well, for all you who truly believe that size matters, you'll be pleased to hear that Dell finally released its 20-inch laptop: "PC makers bet on super-sized laptops."

According to this latter news story, "In keeping with its high-end target audience, the model--which starts at $3,500--comes with a slew of bells and whistles, including eight speakers plus a subwoofer, detachable wireless keyboard, and a gyroscope-enabled remote."

While some of the images in the Dell photo gallery are fairly impressive, you can't deny that these babies are lacking in their ease of portability, due to the increase in both size and weight. Cleverly, they call them "desknotes" - a combination of a desktop and a notebook. For a review of Dell's XPS M2010 desktop/laptop hybrid, check out this recent News.com story: "Is Dell's luggable lovable?"

Personally, I don't think I'll jump on the 20-inch laptop bandwagon. They sure do look nice, but heavy and cumbersome equipment isn't very travel-friendly, which is the main reason most people purchase laptops in the first place. Will it replace the desktop PC? My bet is that it won't - but then again, I'm not a very good gambler... 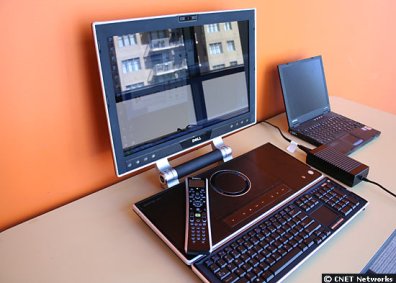