During the disco days of the 1970s, personal computers moved out of the electronic hobbyist's garage or basement and into the office, classroom, and family den. I posted a gallery that showcases several 1970-era machines from Steven Stengel's vintage computer collection. Steven has graciously allowed us to republish his photos and descriptions. Here's one of my favorites.

Built by IMS Associates, Inc. of San Leandro, California, the IMSAI 8080 is one of the first consumer computers available. 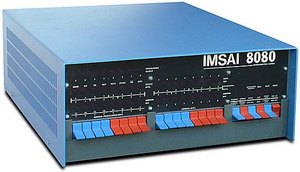 I never worked on one of these babies--still a bit before my time. Some of my first computer memories are of the Apple II's my school used. I spent many hours making a the Turtule move around the screen by entering mathematical equations using the Logo programming language.