offers portability and performance. Yet after using the unit for several

months, I believe only those who need a slate-style tablet will be truly happy

with this unit. When used as a pure slate (sans keyboard and docking station as

shown here), the TC1100/TR1105 is an ultra-portable, ultra-convenient computer.

and necessitates the purchase of the optional docking station. Depending on the

configuration and accessories you purchase, the TC1100/TR1105 costs around 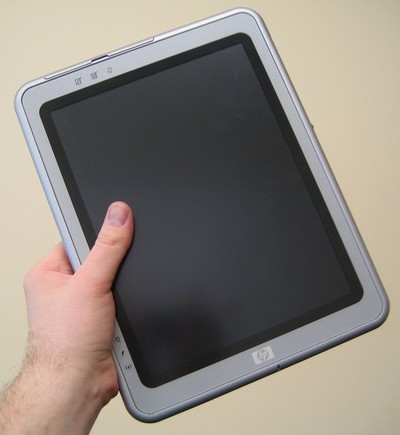 adapters. The docking station came with an optional DVD/CD-RW drive.

Unpacking the test unit, I had my first tablet PC epiphany--these things are useless with out the stylus. The test machine had arrived with a keyboard, docking station, leather carrying case, but no stylus. I tried to use the machine without the accompanying input device, but my best efforts proved fruitless. Once HP sent a replacement stylus, I began using the TC1100/TR1105 with renewed enthusiasm.

Excel, and PowerPoint. I composed and send e-mail with Microsoft Outlook. I

browsed the Internet and used online applications with Firefox and Internet

presentation. I even played solitaire and worked a few crossword puzzles.

While putting the TC1100/TR1105 through my real-world tests, I made the following important realizations that anyone contemplating a tablet PC purchase should carefully consider:

I like the TC1100/TR1105, I only recommend the unit for environments where its slate-based features shine. Users who continuously move and only perform limited text entry are perfect places for the TC1100/TR1105. Otherwise, consider a convertible notebook that functions as both a tablet and traditional laptop.