Data center fire suppression is more than a few sprinkler heads and a cool-sounding alarm. Rather it is about risk, budget, and a little common sense coming together to meet business continuity outcomes.

I can hear you now… “Not another article on the boring topic of fire suppression!” Well, I promise if you ignore your growing angst and an urge to shift to another page, any other page, I will make it worth your time.

Like data centers (once called computer rooms or electronic data processing centers), the approach to containing a fire in what is now the nerve center of your organization has significantly changed. It isn’t enough to simply install a smoke alarm and a few sprinkler heads. This only works if you don’t mind having your business down for days or weeks after a fire.

In this article we’ll look at the business outcomes you should consider when writing a check for fire suppression services and how to achieve them.

Before purchasing a fire suppression system, it’s important to understand what it is your trying to achieve.  Yes, you’re trying to put out future fires. But that is an incomplete requirement. The real business requirement is to put out the fire and get your business back up and running within hours.

The components of a business-friendly suppression system include:

Like all physical security controls, the number of dollars you spend and the system you select depend on the business risk you are willing to accept. With that in mind, let’s take a closer look at the elements of today’s data center fire suppression solutions.

You would think a detection system has a simple job: detect a fire. The problem arises when you begin to consider what a detection sensor sees as a fire.

A few years ago, our suppression system decided to dump Inergen in our data center on a Saturday night.  Since no one was present, we couldn’t hit the switch to delay the release.  If we had, we would have found that one of the sensors detected the gas emitted by a leak in the cooling system as a fire.  Since we had a contract with a data center cleaning and restoration company, we quickly called them; it took 24 hours to return the data center to normal.

The moral of the story? Make sure your detection system is tuned not to react to possible false alarms caused by other components in your data center. Another consideration is just as important. If your sensor detects smoke, it should also want to see heat before ruining your day.

Alarms are pretty simple; they make a loud noise and people walk quietly to the exit. That’s fine if you’re using systems that cause no harm to humans. However, many types of suppression materials (covered later) are intended only for areas with no human presence.  So you should integrate the alarm into the suppression release process, allowing an adequate human evacuation period to elapse before putting out the fire.

The flashing light is not only a good idea when one or more employees have hearing problems. It is also useful when the alarm is trying to rise above the ambient decibels generated by hundreds of servers, storage devices, etc.

First, the primary purpose of the portable fire extinguishers hanging on support posts in your data center is not to encourage your server engineers to bravely stand between a fire and that new enterprise server platform they just spent days getting to work right. Rather, they are intended to ensure people in the data center have a way out when fire is blocking the exits.

This isn’t something I plan to spend a lot of time on. It’s important to take away that no large facility with scores of electrical or electronic devices should ever be without a big red button on the wall that, when pushed, immediately cuts all power. However, use sparingly. Hard power shutdowns are not computer friendly.  (Can you say backups?)

So we finally arrive at the one item in our list that can either allow quick recovery or weeks of finger pointing. Selecting the suppression agent to put out actual fires is a decision made with all critical business process stakeholders at the table. The discussion should include the following options:

So gaseous agents are usually your best choice, if you can afford them. In addition to higher implementation costs than water systems, gas systems require annual maintenance and floor space for canisters storing the agent (see Figure A from Wikipedia.org). In this example, there isn’t much space used. However, in my last data center the Inergen canisters took up about 200 square feet in a room separate from the data center.  We affectionately called it the missile room. 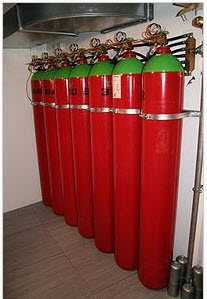 In addition to these traditional systems, some companies have released what they call fire prevention systems. These proactive approaches reduce the normal amount of oxygen in the data center, reducing the opportunity for a fire to really get started if sufficient heat and fuel present themselves. Before running out and buying one of these systems, check with local and federal safety regulators. Most are still on the fence, teetering between acceptance and their belief that these systems reduce oxygen to levels harmful to human health.

So as you can see, implementing fire suppression as a physical security control is not so easy. It requires knowledge of business risk acceptance, understanding of maximum tolerable downtime, and the right budget. And as always, it requires the cool, calm security manager who brings the right people to the conversation and enlightens them in how properly dealing with Prometheus’ gift sometimes requires a little wisdom.

Tom is a security researcher for the InfoSec Institute and an IT professional with over 30 years of experience. He has written three books, Just Enough Security, Microsoft Virtualization, and Enterprise Security: A Practitioner's Guide (to be publish...