The upcoming new version of OneNote 2010 offers assorted enhancements, including its own Ribbon interface, page versioning, and handy shortcut menus. Here's a quick tour of what you can expect.

Microsoft is getting ready to bring forth yet another iteration of the Office suite of applications. The new product, Office "14" (shipping as Office 2010), is in Community Technical Preview right now, and I have been selected to participate. As a precursor to some upcoming materials for TechRepublic, I thought an overview of some of the Office 2010 applications would be a good starting point.

Microsoft introduced OneNote in Office 2003 as a way to provide a seamless note-taking environment that worked as much like a spiral notebook as a computer would allow. At first glance, the application was pretty basic. It seemed to me to be something to think about using, but not something I couldn't live without. But OneNote carried through to Office 2007 and added some features, and it became more useful. Now I do use it every day, and am not sure I could manage without it.

OneNote 2010 includes some UI enhancements you'll notice right away (Figure A). The Ribbon has been added to the application. In my opinion, this is a good thing because it keeps the UI consistent across all Office applications. And for note-taking, the Ribbon is actually a great tool. Figure A

A key feature of OneNote since version 1.0 is integrated saving. This is likely one of the coolest features. When you enter notes, the application saves automatically and all the time. It works in this regard much like a paper notebook: When you write it, there it is.

In OneNote 2010, notebooks can be edited by multiple people. Previous versions allowed notebooks to be shared among teams via SharePoint or network shares, but the editing was not as real time as it is in the new version.

Using OneNote always appealed to me for a few reasons. When it was new, I wanted to give it a try. Later, it became the easiest way to manage meeting notes and other documentation. Now, it helps me stay organized in almost all areas.

I have a PC at work and at home -- how can I get notes on both PCs?

There are ways to get this to work, and these methods have been around since OneNote's inception. Using removable media, you can create a shared notebook that allows you to connect the notebook to multiple computers, streamlining the keeping of notes.

You can publish your notes in a SharePoint environment to share them with a team of colleagues, making the notes available to multiple users across multiple PCs.

And finally, here's a workaround I came across by chance. Using Microsoft Live Sync, you can create a shared notebook that synchronizes to the cloud, allowing the notebook to be shared across multiple PCs anywhere in the world.

I use Live Sync to share my notebooks with my laptop and my work desktop even though I have my laptop at work most days. This way, if I need to get notes from an email or other document on my work PC, they can be added to One Note and appear on my laptop without additional work.

The best part about syncing to the cloud is that the OneNote team is working to include a similar cloud sync scenario right in OneNote 2010 to eliminate the need to configure Live Sync to manage notebooks.

Another feature I recently discovered is Side Notes. OneNote allows you to create an electronic sticky note for quick access to notes. (This may or may not replace the stack of Post-Its on your desk.)

Using a side note to take quick notes about a task or project can be handy and will provide all of the features of the full-blown OneNote application. To access side notes, use the Windows Key + N combination from within OneNote or right-click the OneNote tray icon and select new side note.

Will my side notes be kept forever or do I need to transfer them to OneNote?

Side notes, like all OneNote 2010 notes, are saved automatically. These notes are stored as new pages within the location of Unfiled Notes, making them completely searchable and accessible from within OneNote.

OneNote works extremely well on a desktop, notebook, or tablet PC. Using OneNote on a tablet allows you to draw and use your own handwriting on the screen -- handy for a quick note in a meeting or to annotate an email you received.

OneNote 2010 also supports linked notes. Linked notes are placeholders to other items that are referenced within OneNote. You have always been able to insert hyperlinks to other sections of your notebooks. For example, working from a list of projects you may have is a great way to see an overview of all the projects waiting for your attention. Keeping the details for each project in a separate area for that project might help organize your thoughts a bit better. Using hyperlinks, you can click on the list entry and go directly to the page for the project.

With linked notes, you can create a link from OneNote to other applications like Outlook or Word in a method that's similar to using hyperlinks within OneNote.

Note: Linked note taking is supported only in notebooks that are saved in the OneNote 2010 format.

Speaking of Outlook, tasks and meeting notes can be taken and managed between Outlook and OneNote. When you create a meeting in Outlook, you can create an entry in OneNote for that meeting with the Meeting Notes button on the meeting request (assuming that both Outlook and OneNote are installed). Working with tasks is done in the opposite direction: While taking notes in OneNote you can convert them to Outlook tasks, which will appear on the task list in your mailbox, and manage them from either OneNote or Outlook.

Have you ever found yourself wishing you could see OneNote and the Web page or email you are working with at the same time? I know I have. Working on something online -- for example, booking a flight -- and having to change between the browser and OneNote to keep track of all the deals I found seems a bit of a hassle, but it was the only way. Not in OneNote 2010. You can dock OneNote to the desktop, which minimizes the Ribbon and puts a single-column view of the current page on the right of the screen, next to your other applications (Figure B). Figure B 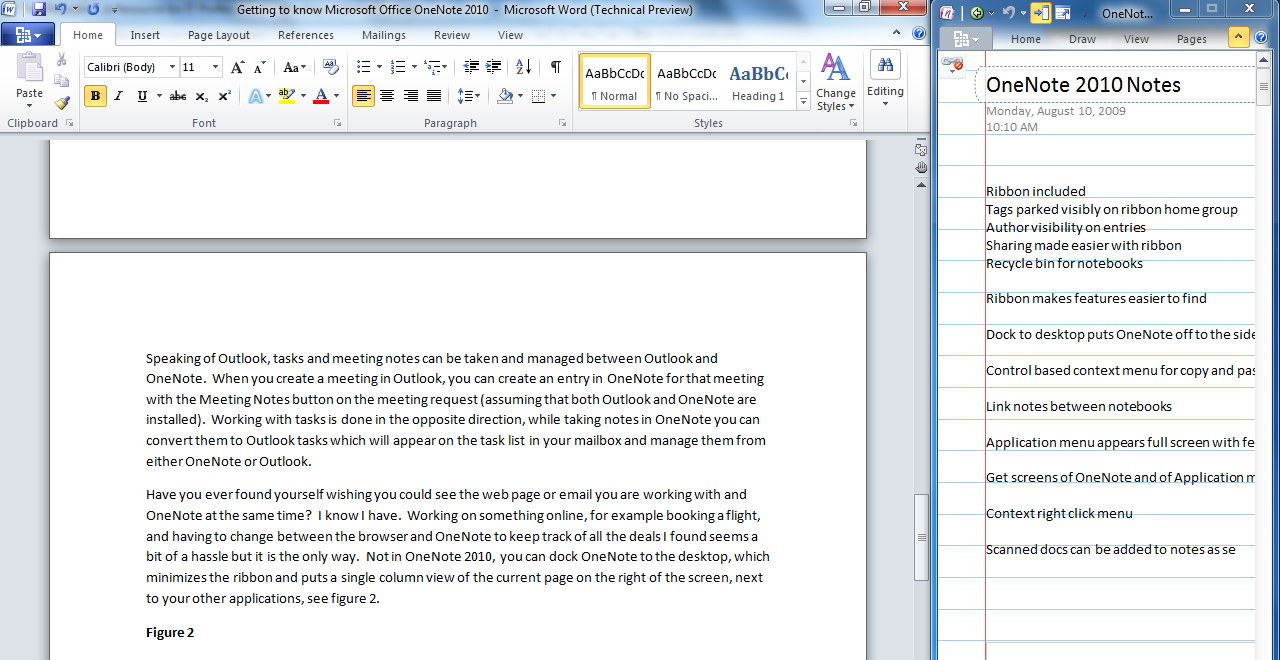 OneNote 2010 docked to the desktop

Note: Recycled notes and page revisions need to be enabled before use.

This is just an overview of OneNote 2010, so we haven't covered all of the bells, whistles, and other features of the application. Hopefully, you will give OneNote another look and find that it is a great all-around tool for school or for business.