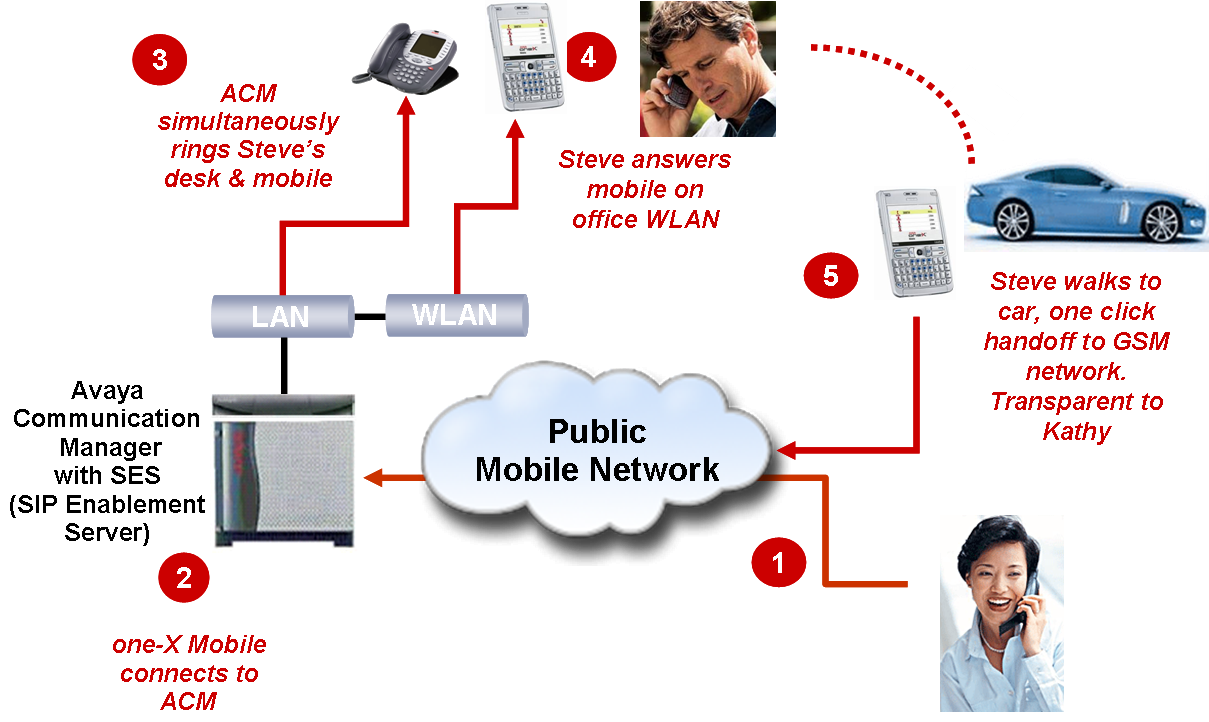 I love the idea of using a single device to seamlessly move between networks and Avaya's solution offers several benefits. Users need only manage a single phone number and voice mail inbox, instead of two--one for their mobile phone and one for their desk phone. Areas with poor or no cellular service (basements, inside large metal buildings, and so forth) can be covered with a Wi-Fi network and reduce service interruptions. As the above graphic indicates, users can roam between a cellular and private Wi-Fi network without dropping an active call. If employees regularly substitute a cellular connection with a Wi-Fi one and the organization pays for cellular calls on a per-minute basis, the organization could potentially reduce their cellular costs.

Despite the benefits, Avaya's solution has several significant limitations. First and foremost, not a single US cellular carrier sells the Nokia phones that run the Avaya one-X Dual Mode application. Without carriers subsidizing the phone's purchase price, organizations must pay full price for each device--not a cheap proposition. Nokia lists the E61 at $379.99. You'll also need to spend $160 (list price) per phone for an Avaya one-X Dual Mode license--pricing may be reduced through discounts. Second, organizations will only see a savings on their cellular costs in a limited number of situations. Organizations that pay for cellular service on a per-minute basis or have employees who regularly rack up roaming charges may realize cost savings if they have a Wi-Fi infrastructure that can supplant parts of the cellular network. Third, Avaya's solution only works on private Wi-Fi networks, which are connected to an Avaya Communication Manager with SES. You'll have no luck trying to use the phone's Wi-Fi connection at a public hotspot. Lastly, Avaya must convince its current carrier business partners to begin reselling the Avaya one-X Dual Mode solution-a solution which could reduce the carriers' profits from per-minute and roaming charges. When I put this question to Hardy, he answered that Avaya's solution allows cellular carriers "to offer their enterprise customers complete communications solutions-both cellular and enterprise-class communications systems." "We think that the carriers will win," Hardy continued, "by offering comprehensive solutions to their customers." As of my interview, no US carrier had stepped forward to offer the product.

The Avaya one-X Dual Mode solution moves organizations one step closer to a totally unified communication infrastructure, a huge win for both organizations and users. Unfortunately, the product has significant limitations that temper my initial enthusiasm. If Avaya can convince cellular carriers to sell the product, provide support for a greater variety of mobile operating systems and devices, and update the product to work on both private and public Wi-Fi networks, they may have a real winner.