Having grown up with Windows as my primary operating system, I've taken for granted how easy it is to find compatible hardware. Recently, I learned that life isn't as user-friendly for Linux users. After migrating one of my computers to Linux, I noticed that the operating system wouldn't detect the machine's Microsoft PCI Wi-Fi card. After scouring the Internet, I found instructions for making wireless cards work with NDIS Wrapper and similar applications, but no references to a card with Plug and Play Linux support. It took hours of effort and several trips to local hardware retailers, but eventually I found a Linux distribution and Wi-Fi card combination that worked-SUSE 10 and a specific version of the Belkin Wireless G Desktop card.

I performed a fresh install of SUSE 10 on my machine and went off to find a compatible PCI 802.11g card. I went first to Best Buy and browsed their wireless cards. A salesperson approached me and offered their assistance. I explained that I wanted a PCI card that would work with Linux "out-of-the-box". Unfortunately, the salesperson had no clue which card would work. After researching several cards that Best Buy had in-stock, I decided to try the Linksys 54g PCI card. I took that card home, but had no luck. I tried five different card brands from Best Buy, but none offered Plug and Play support for Linux.

Finding the Belkin F5D7000 Wireless G Desktop card After more Internet research, I found several people also searching for a Plug and Play Linux solution, but no answers. It was during this search that I also realized I had yet tried a Belkin wireless card. I went off to Walmart and purchased a Belkin wireless G card for $29.95, see Figure A. Figure A 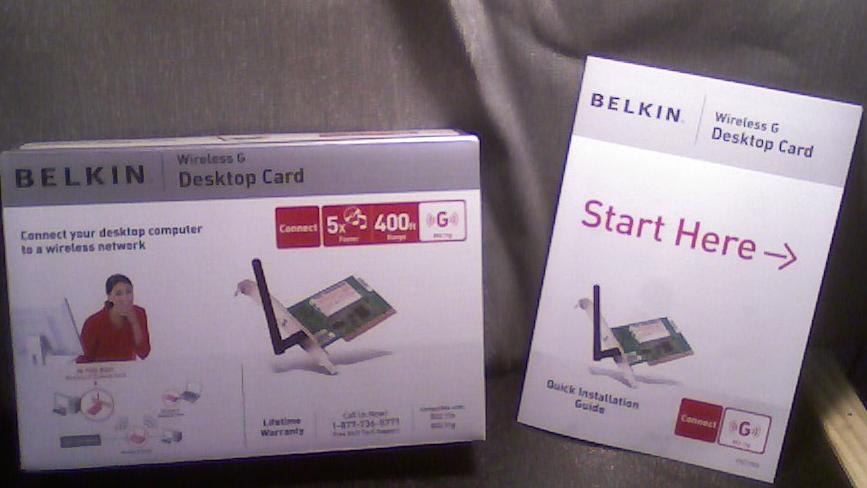 I took the card home, installed it and turned on the computer. To my surprise, when SUSE 10 a wireless dialog box appeared with a list of three detected SSIDs. I selected my router's SSID, typed in my encryption code, opened Firefox and accessed the Internet. My search was over.

Since my first glorious moment of wireless connectivity, I have changed Linux distributions several times. The Belkin wireless G card worked with almost every Linux flavor, but only SUSE 10 and Ubuntu worked right out of the box.

It's all about the Atheros chipset

The Belkin Wireless G Desktop Card isn't the only Wi-Fi card that works with Linux. The Wireless G Desktop Card's Linux compatibility lies within the card's Atheros chipset. According to the company's Web site, Atheros Communications has offered "open source Linux and FreeBSD software drivers for 802.11b/g and universal 802.11a/b/g products" since July, 2003. Mandy laptops with integrated Wi-Fi support use the Atheros chipset. This is a reason many laptops will automatically connect to the Internet after you install Linux.

Unfortunately, manufacturers, including Belkin, sometimes vary the chipset on the same model Wi-Fi card. Since discovering the Belkin card, I have visited three different Walmart stores and found three different versions. Version 5100 contains the Atheros chipset. The version number is printed on a white sticker located to the right of the barcode, see Figure B. I have tried other versions of the Belkin Wireless G Desktop, but all have failed. If your local Walmart doesn't carry this specific version, I have also found the card at Staples. Figure B