Aircell, a provider of airborne communications, will be rolling out their new in-flight broadband offering on domestic flights in the next couple of months. Aircell will cover the U.S., delivering mobile broadband service on an exclusive 3-MHz air-to-ground (ATG) frequency to communicate to and from aircraft.

Aircell, a provider of airborne communications, based in Itasca, Illinois, will be rolling out their new in-flight broadband offering on domestic flights in the next couple of months. Yes, mobile broadband while in flight. Aircell will cover the U.S., delivering mobile broadband service on an exclusive 3-MHz air-to-ground (ATG) frequency (which the company won in the FCC's spectrum auction in 2006) to communicate to and from aircraft.

"The airplane is one of the last disconnected places left, if not the only place, where you can't really be on the Internet - until now," says Fran Phillips, Aircell's SVP of Airline Solutions. "This will be a landmark year for air travelers who value staying connected to what matters most." The company recently completed its build-out of the Aircell Network, which covers the U.S., delivering a mobile broadband service. The Aircell Network and its in-flight Internet service, known as Gogo, promises to revolutionize the passenger experience, delivering the Internet at 35,000 feet.

This solution was created with Oakbrook-based service provider generationE Technologies, and combines IBM Tivoli management tools, Tivoli Netcool Omnibus and Impact with the familiar Google Maps visuals to provide a tracking system that manages Web access on a plane-by-plane basis (see illustration in Figure A). 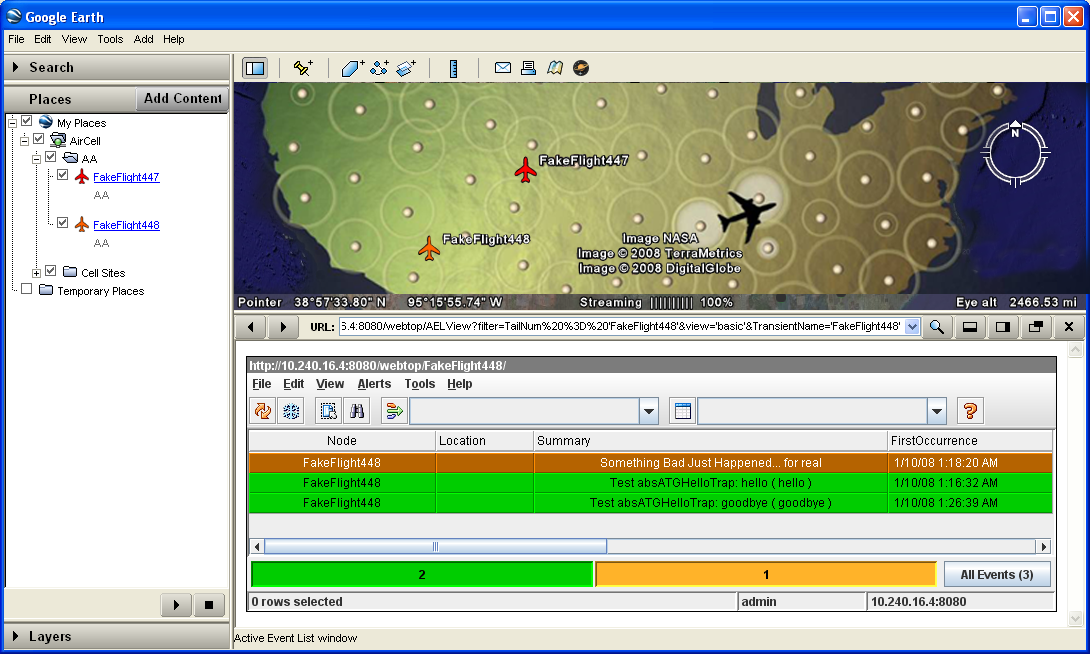 American Airlines wired the first of fifteen aircraft in January to be outfitted with Aircell's mobile broadband hardware and has recently moved into the production phase on the remaining fourteen aircraft. Initially, Aircell will offer the Gogo service to American Airlines' passengers on all of its B767-200 aircraft, which are primarily dedicated to transcontinental flights. Virgin America is also moving to offer in-flight Internet. Virgin America will be bringing mobile broadband service to all of the carrier's passengers later in 2008 and will set another first by integrating with Virgin America's current In-Flight-Entertainment (IFE) system, Red.

So what will this new perk cost? In contrast to earlier pricing of Boeing's now-defunct Connexion service, which was $30 per flight, Aircell's price for Gogo is very affordable. Pricing will be similar to what consumers pay on the ground at a Wi-Fi hot spot with a cup of coffee. At launch, the service will be offered only on longer routes (above three hours in duration) and will be priced at $12.95. In the future, the service on more typical flights can be expected to be around the $10 mark.

Aircell's President and CEO Jack Blumenstein describes the advantages of the air-to-ground system and the company's co-developed solution with generationE by saying, "As the leader in airborne communications for business and commercial aviation, we believe our air-to-ground wireless network is the most economically and technologically sound choice today and in to the future. With the help of generationE, Aircell is able to offer the most reliable, robust, and cost-effective service to airline customers and their passengers."

Jeff Cerny has written interviews with top technology leaders for TechRepublic since 2008. He is also the author of Ten Breakable Habits to Creating a Remarkable Presentation.