Smart Defrag is a bare bones defragmentation application with a simple interface that adds Auto Defrag functionality to the mix.

Smart Defrag from IObit.Com is a bare bones defragmentation application that adds a unique feature to the mix. With a simple interface and its Auto Defrag functionality, Smart Defrag is a free upgrade to the standard defrag functionality that comes with the Windows operating system, and you may want to check out. 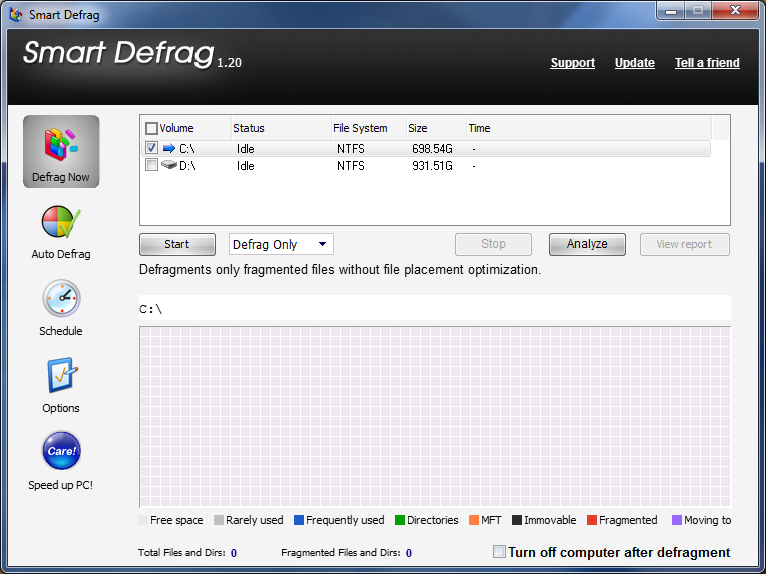 Every system has a need for periodic defragmentation of the file system. In particular, power users and heavy media users are constantly adding and removing large files from their systems with frequent application installation/removal cycles, and media downloads/deletions. PC technicians and desktop support personnel also are heavy defrag users as they try to speed up customers' systems.

While Microsoft Windows comes with a defragmenter, some people find it confusing or hard to use, particularly the scheduling features. In addition, some systems are performing enough file system changes that fragmentation is occurring constantly. Smart Defrag, particularly with its Auto Defrag feature, is designed to address these scenarios.

The defragmentation market is fairly crowded, with a wide variety of free and commercial offerings available. In most cases, which product is used is much less important than whether or not it is actually used. Windows comes with its own defragmenter, and in Vista and W7, it is scheduled to run on a weekly basis.

But some users will want a product that does more than that. Smart Defrag sets itself apart from Windows Defrag mainly with its Auto Defrag feature. Auto Defrag allows Smart Defrag to sit in the background (consuming little RAM in the process), and automatically defragment files as soon as it sees them become fragmented. While other products can trigger a defrag cycle based on period of inactivity, the Auto Defrag feature is more active and targeted than that.

That being said, the other thing that really sets Smart Defrag apart from the Windows Defrag is the Auto Defrag feature itself. There are a few smaller features in there that some may appreciate, like multiple levels of defragging. But for the typical desktop user, Smart Defrag probably will not be a substantial upgrade over the Windows Defrag, and suffers a bit in comparison to other applications like Defraggler.

Have you encountered or used Smart Defrag? If so, what do you think? Rate your experience and compare the results to what other TechRepublic members think. Give your own personal review in the TechRepublic Community Forums or let us know if you think we left anything out in our review.