Deb Shinder highlights five apps that make the phone part of your smartphone work better for you.

Remember when cell phones were just for making telephone calls? We use today's smartphones for much, much more. They function as tiny held-hand computers that browse the web, send and receive e-mail, create and view documents of all kinds, and run a myriad of apps that can do everything from lighting up the night to reading and interpreting the barcodes on products.

Some of us could probably get along just fine with a data plan and no voice minutes at all, if our carriers would let us. It's easy to forget that the primary purpose of a phone is to make, receive, and manage actual phone calls. But the nice thing is that the software on today's phones -- both the built-in features and the apps we install -- can make them much more functional as phones in addition to all those other functions. In this article, we'll look at how you can make the "phone" part of your smartphone work better for you.

Whether it's a "zombie" bill collector who thinks your number belongs to someone on his debtor list and you're just covering for the deadbeat, a not-so-secret admirer whose affections you don't return, a recurrent wrong number, or someone else whose calls you prefer not to take, the ability to block unwanted calls is a big benefit of today's technology. Carriers often offer this service, but you might have to pay an extra monthly fee for it. Instead, you can install an app to give you the same capability, for only a small one-time price.

One such app is Call Guard ($2.99 USD), for Android 2.0 and above, which will block both voice calls and SMS text messages from specified numbers. You can create black lists, or you can create white lists and block all other calls, as shown in the figure below. 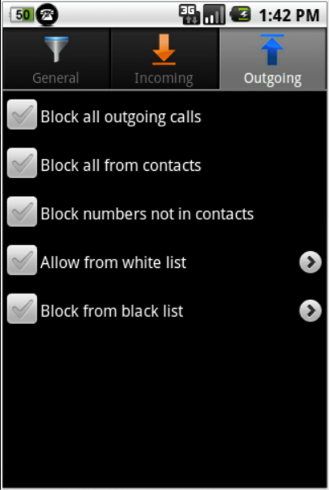 With Call Guard, you can choose to have the calls sent to voicemail or use pickup/hangup mode where the caller doesn't even get to leave a voicemail message. Another option is to simply set the phone to mute the ringer for specified calls. There's a lot of flexibility; you can block hidden numbers or all numbers not in your contact list. You can even block SMS messages that contain specified keywords, and you can use filters to block by time of day or day of the week.

You can also block outgoing calls, which is useful if you share the phone with someone else, and you can password protect the app so the other user can't change its settings. At $2.99, the price is more than reasonable and pays for itself quickly when compared with purchasing an additional carrier service to do the same thing.

Your smartphone probably provides a call log where you can see the history of calls you've made and received, but some leave a lot to be desired. Call Log Manager Pro ($1.99 USD) can log calls to your calendar, and it lets you group calls not just by the usual types -- incoming, outgoing, missed -- but also by date, by contact, or according to custom filters that you create yourself. You can also write your call history to a .CVS or XML file, and you can delete call records by type or for specific contacts. You can search the log or get graphical analysis information about your calls. Best of all, it gives you detailed information about the calls.

When you're using your phone in the car or another hands-free environment, it's really handy to be able to hear who's calling before you answer. Sure, you could just set a custom ringtone for every person in your address book -- and if you only know ten people, that might work fine. Otherwise, something like the Talking Caller ID app can be very useful. It will speak the name or number of the incoming call so you don't have to look at the phone to find out who's calling. There's a free and a paid version ($1.49 USD). The full version is very customizable; you can have it speak over your ringtone or silence the ringtone, choose to use it with only calls from your contacts, only calls from non-contacts, or only calls from specific contacts.

It's often handy to have a full recording of business phone calls, so you can go back and verify what was said -- either for your own use (e.g., someone provided detailed instructions on how to do something and you didn't get it all down in your notes) or to "prove" what you or someone else said if there's a disagreement about it later. One app that you can use to do this is Total Recall Call Recorder ($7.96 USD). It allows you to record phone calls manually or automatically, and you can have it automatically send you or someone else the audio file via email.

Unfortunately, on some phones, it won't record both sides of the conversation (check the list of phones), and you should always be aware of the laws regarding the recording of phone calls in your jurisdiction, as they vary according to your location. You can test the free trial before you buy.

One of the most useful apps you can get for making the phone calling experience better on your smartphone is Google Voice for mobile. You can make calls (and send text messages) from your Google Voice number (which can be configured to ring any or all of your phones -- mobile, home, work), and it integrates with your Google contacts and your phone's address book.

One of my favorite-by-far features of Google Voice is the ability to get my voicemail messages as e-mail transcriptions. That way, instead of having to play and listen to the message, I can just read the text of it as an e-mail. That's much less disruptive if, for example, I'm in a meeting and don't want to hold the phone up to my ear to hear an audio message. I have to note, though, that the transcription works better with some voices than others. Some of the transcripts are almost perfect, whereas certain accents or dialects can throw it off completely, resulting in gibberish or unintentionally funny results, such as when I got a message from a very businesslike man I know that was transcribed as "Hi, babe" instead of the "Hi, Deb" that he really said. Here's another transcription that didn't turn out so well:

The good news is that the e-mail with the text transcription also includes an attachment that's a .wav file with the audio version of the message, so if you can't figure it out, you can always listen.

With Google Voice on your phone, you can set up custom greetings for different callers. Best of all, it saves you money. You can make lower cost calls to international destinations than what your carrier charges, and you can send text messages through the Google Voice app at no cost, whereas most carriers charge you a monthly fee or 10-20 cents per message.

Google Voice apps are available for Android, BlackBerry, the iPhone, and with other phone operating systems, you can use the web-based version of the service.