Deb Shinder provides some tips for utilizing your smartphone offline, especially when you're traveling and Internet connectivity is either expensive or non-existent.

We depend on our smartphones to do all sorts of amazing things. But what we might not realize -- until we're faced with a network outage -- is just how dependent those phones are on the Internet for much of their "smartness."

I experienced this first-hand when I was in Belgium for TechDays Europe 2012. Since Verizon's CDMA and LTE networks aren't available over there (some companies, such as Mobistar, have deployed limited LTE service but the rollout is going more slowly there than in the United States), my Samsung Galaxy Nexus smartphone became a whole lot dumber whenever we ventured away from the hotel and its Wi-Fi network.

I also brought along a GSM world phone, my unlocked HTC Surround Windows Phone, and even though I bought a U.K. SIM card for making phone calls and sending text messages, many of the functions that I take for granted in the U.S. -- from looking up a restaurant's hours of operation to translating a phrase in another language to using the GPS to find my way to my destination -- suddenly became a lot more complicated with no ubiquitous data connection.

However, I learned that a data-dependent smartphone can still be useful when you're offline if you plan ahead and anticipate what you're going to need to do with it.

Will your phone work overseas?

Americans who have AT&T or T-Mobile phones may be wondering if they can use their phones in Europe, since they use the same GSM technology that's in use there. The answer is: It depends. It's not enough for the phone to use GSM; it also has to operate on the right frequency. You need a "quad band" GSM phone, one that works on multiple frequencies. The frequencies you need for Europe are 900 MHz and 1800 MHz for voice and 2100 MHz for data. Quad band phones are often referred to as "world phones."

Some Verizon phones are world phones, too, such as: Motorola's Droid Pro, Droid 2 Global, and Droid 3; HTC's Incredible 2 and Trophy; and the iPhone 4S. These phones have a GSM radio in addition to the CDMA and LTE radios, so you can get a European GSM SIM card to use with them when you're overseas. The catch is that Verizon charges you a fee ($4.99/month) while your phone is "unlocked" (able to use a non-Verizon SIM card).

AT&T phones are typically locked to the AT&T SIM card that comes installed in the phone, so they work overseas -- but you have to pay AT&T's roaming charges (which can be expensive). If you buy an "unlocked" GSM or CDMA/LTE/GSM phone (which costs considerably more because it's not subsidized by the carrier, but also doesn't lock you into a two-year contract like subsidized phones do), you can just buy a European SIM card from a European carrier or from a service such as Mobal, whose card works with multiple carriers.

Before you go, investigate what the charges are for both voice calls and data usage in the country you're visiting. For example, if you opt for the Mobal World SIM and you're going to the U.K., incoming calls are free, but outgoing calls within the country are $1.25 per minute, calls to the U.S. and Canada are $1.50 per minute, and calls to other countries are $2.95 per minute. Incoming text messages are free, while outgoing texts are $.80 per message. Finally, data is $.02 per 10 KB.

Other SIMs or your own carrier's plans will have their own charges for different usages. If you're using international roaming through your U.S. carrier, data rates may be as high as $20 per MB for data, which is a lot more than the $2.05 per MB charged by Mobal for data in the U.K. (however, Mobal charges $.11 per 10 KB -- or $11.26 per MB -- if you're in Italy). Another alternative that’s similar to Mobal is OneSimCard; the initial cost of the card is higher, but the charges for minutes, texts, and data usage are lower.

As you can see, you can save a lot of money by planning your calls appropriately. It might be much more cost effective to send a text message to ask someone else to call you instead of placing the call yourself. Something else to be aware of is that if you buy a SIM from a local European carrier or Mobal, it will come with a "local" phone number (Mobal's are U.K. numbers), so people won't be able to call you on your phone's U.S. number.

If you have a smartphone and a Wi-Fi connection, your most cost-effective way to call home may be by using Skype, ooVoo, or another similar Internet service.

Turn off the radio

One of the first things I learned about using my phone internationally was to turn off the mobile network radio if there's no mobile network for it to find. Otherwise, it will keep trying to locate its lost signal and run the battery down very quickly in the process. In normal use, the (extended) battery on my Nexus lasts around 18 hours. The first day in Europe, I noticed that it was drained after about four hours. I charged it up and it quickly drained again. That's when I had an "ah ha!" moment and put it in airplane mode. That did the trick; my charge started lasting more than a full day again.

Modern smartphones have a variety of apps that are very handy when you're traveling. Android phones, for instance, usually come with Google Navigation, which uses your phone's GPS to guide you to a destination. The good news is that, unlike the voice and data networks, the GPS transmitter/receiver can communicate with the GPS satellites no matter where you are in the world. The bad news is that most navigation apps need an Internet connection to access the maps that make the GPS signal actually useful.

You can turn on maps caching in Google Maps Labs. This is where you find experimental features in Google Maps. In the Google Maps app, go to Settings, select Labs, and then scroll down to "Pre-cache map area." 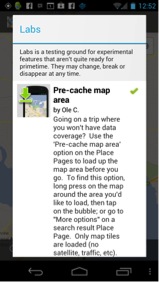 You can pre-cache map tiles with the experimental feature in Google Maps.

This explains how to cache maps (in 10 mile increments) by long pressing the area on the map that you want to save, then tapping on the bubble. Unfortunately, this only loads the map tiles, so you can't see satellite imagery or Street View pictures or get driving directions while you're offline.

Given the rates you have to pay for data usage overseas, even if you have the technical capability of staying connected for hours while you're driving or walking through strange territories, you might not be able to afford to do so.

There are other apps that you can use to download maps before you go, while you're still connected to your U.S. data plan or when you're connected to a Wi-Fi connection in your hotel. Many of them are paid apps, but there are also free ones available. One of these is MapDroyd, which stores the maps locally on your device in a compressed format. There are street maps available for locations all over the world. Note that it can take a while to download the maps.

MapDroyd downloads maps of locations all over the world.

MapDroyd stores fully navigable vector-based street maps, not just map tiles. The maps also show landmarks, gas stations, restaurants, etc. Again, you don't get turn-by-turn directions, but the GPS can locate you on the map and track your movement.

If you do want offline navigation with turn-by-turn directions, you'll probably have to pay for it. However, there is a free app from the same company that makes MapDroyd called TravelDroyd. The app itself is free, but you have to pay for the "travel guides" for various locations (except Berlin, Germany, which comes with the app at no cost). The travel guides include street maps and points of interest in 20 different languages. You can search the maps for addresses or categorized points of interest and get turn-by-turn driving or walking directions between points. There is even a terrain view that shows topographical contour lines.

Another very handy app for traveling in foreign countries is Google Translate, which you can download from the Android Market. It will translate between more than 60 different languages. You can either type or speak the words or phrases you want to translate. Even better, the app will speak the translation for you. Conversation mode is especially helpful, whereby two people speaking different languages can have their words translated into each other's languages.

Google Translate pulls the translations from a server on the Internet, so if you don't have a connection, you don't have translation services. But there's a trick, if you know it: Translate caches the translations that you've already made. That means you can anticipate the words and phrases that you might need to translate, translate them while you have a connection, and then they'll be there for you to look up when you need them. There's a catch, though; you'll only get the written translation when you're offline, not the spoken one. That can be a problem if you aren't good with pronunciation in the other language, but it's still better than nothing, and you can always show the written text to the person with whom you're trying to communicate.

As with the mapping and navigation programs, the solution is a third-party app that gives you both audio and text translations when you're offline. One of the most popular is Lonely Planet, which you can get for both Android phones and the iPhone.

Lonely Planet gives you both audio and text translations when you're offline.

The basic translator is a free download, but you have to buy an additional app for each individual language. The price is reasonable at $4.99 each. The selection of languages is somewhat limited: Spanish, French, German, Japanese, Chinese, Korean, Iraqi Arabic, and Tagalog. It's definitely worth the cost if you find yourself in a train station in the Walloon region of Belgium where the personnel speak only French.

With a little forethought, you can make sure that your smartphone is more than just a fancy digital camera and a calculator when you're out and about with no data connection, here or abroad. Sit down and think about what you're likely to want to do, and then look for offline alternatives to the Internet-dependent services that you would normally use for those tasks. What apps do you recommend for both domestic and international travel, especially when data connectivity may be an issue?

5G networks and devices, mobile security, remote support, and the latest about phones, tablets, and apps are some of the topics we'll cover. Delivered Tuesdays and Fridays