Best practices dictate that when designing iOS Apps you keep in mind that users are part of the interface.

One of the biggest challenges we face as developers is transitioning our user interface designs from a traditional 'point-and-click' design to the more interactive 'point-and-tap' approach today's users have come to expect. It sounds simple on the surface, but there are many important factors to consider. Today's users are accustomed to interacting with applications far beyond the simple point-and-click capabilities of a mouse or a stylus. More to the point, a user should not only be considered an individual interacting with your app, but also a human interface device - with an emphasis on human.

The main difference between the traditional human interface devices - such as a keyboard or mouse - and the human digits used to control mobile devices is the level of predictability, control, and consistency. A mouse tracks on a very linear and fixed horizontal or vertical path. The human hand, however, is far less predictable. Unlike a mouse or stylus, the human hand comes in many shapes and sizes. When developing interactive iOS apps, we need to consider information from Apple's documentation on human interface guidelines as well as information we understand as end-users - such as average finger and thumb sizes.

A user's index finger and thumb work in unison to control an iOS app. While any single digit can be used to click buttons and scroll content, the index finger is the digit of choice on an iPad. In contrast, most users prefer the thumb to click, scroll, and navigate while holding an iPhone in the palm of their hand. With that in mind, we should combine information contained in the iPhone Human Interface Guidelines regarding touch target sizes with documentation supporting actual finger and thumb sizes to determine the best approach.

Apple recommends a clickable area to be no smaller than 44px. This is much smaller than the average width of the pad or fingertip of a human finger. Apple's recommendations fall short when considering the demographics of the majority user community. In a report released by comScore (2012), 74% of iPhone users are over the age of 25. The average adult finger is 10-12mm, which equates to 45-57 pixels. Any iOS app having a high-level of interactivity will have a greater level of acceptability if developed to support larger touch target areas.

To ensure the best experience - given the finite amount of real estate on an iPhone screen - adopt the following best practices: 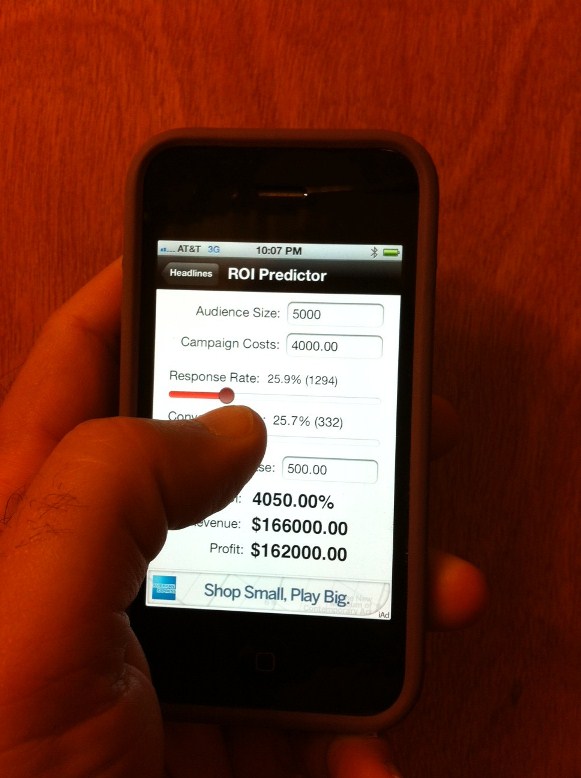 Let's face it; there are many apps that could be better if the developer had taken the time to conduct a usability study to determine the 'touch-friendliness' of their interface design. Running your iOS app on the simulator is fine for testing features and functions, but does not work well for evaluating the usability of your app. Using the human human interface device to tap, click, pinch, scroll, and zoom interactive elements within your app is the best approach to test your app.

In many cases, it might be necessary to alter or redesign the flow of an app to accommodate larger touch areas and create a more cohesive interface. Instead of crowding interactive components on a screen, consider splitting the functionality across several screens. The extra work could pay off in the long run. The secret to user acceptance is finding the right balance between usability and usefulness. Intuitiveness and ease-of-use should also be top-of-mind when designing an iOS app for the masses.

The introduction of the first generation iPhone in 2007 rendered the physical keyboard and mouse obsolete. From that point forward, an opportunity emerged for developers to create applications that would allow users to become more engaged. The users are part of the interface. Only a thin piece of tempered glass separates a user from your iOS app. Only a few simple best practices could be the difference between a poor user experience and a highly adopted iOS app.