In a move that may be welcome news for users of Adobe's Creative Suite, Apple said that it will relax restrictions on its App Store review guidelines.

This is a guest post from Larry Dignan of TechRepublic's sister site ZDNet. You can follow Larry on his ZDNet blog Between the Lines, or subscribe to the RSS feed.

In a move that may be welcome news for users of Adobe's Creative Suite, Apple said Thursday that it will relax restrictions on its App Store review guidelines.

Specifically, Apple said in a statement:

We have listened to our developers and taken much of their feedback to heart. Based on their input, today we are making some important changes to our iOS Developer Program license in sections 3.3.1, 3.3.2 and 3.3.9 to relax some restrictions we put in place earlier this year.

In particular, we are relaxing all restrictions on the development tools used to create iOS apps, as long as the resulting apps do not download any code.

Those sections of the iOS developer license were altered earlier this year. Apple updated its iOS 4 software developer kit to ban intermediary tools that would port applications to the iOS. The move came after Adobe said Creative Suite 5 would include a feature to allow developers to port apps to the iPhone from Flash.

According to a PDF of the standard iOS agreement published today, the amended sections now read:

After Apple's move, Adobe basically gave up on further developing the feature. However, Adobe did file a complaint with the Federal Trade Commission.

Today's announcement from Apple affects the development of apps for the app store, not the issue of Flash running on Apple's iPhone web browser. With the changes, developers will likely be able to use Adobe's Creative Suite to build apps and then port them to the App Store platform. This is meaningful because Adobe generates revenue from sales of its Creative Suite (57% of revenue in the Aug-10 quarter). However, websites that use Flash will still not work on Apple's devices. That said, Adobe does not generate revenue directly from Flash, so the remaining issue does not directly impact Adobe's revenue. Today's announcement from Apple is a change that will enable Adobe to add a new feature to CS5 and should be a driver of CS5 sales, directly impacting revenue.

We have emails and calls into Adobe for comment, but investors took Apple's move as a positive. Adobe shares surged in early trading. 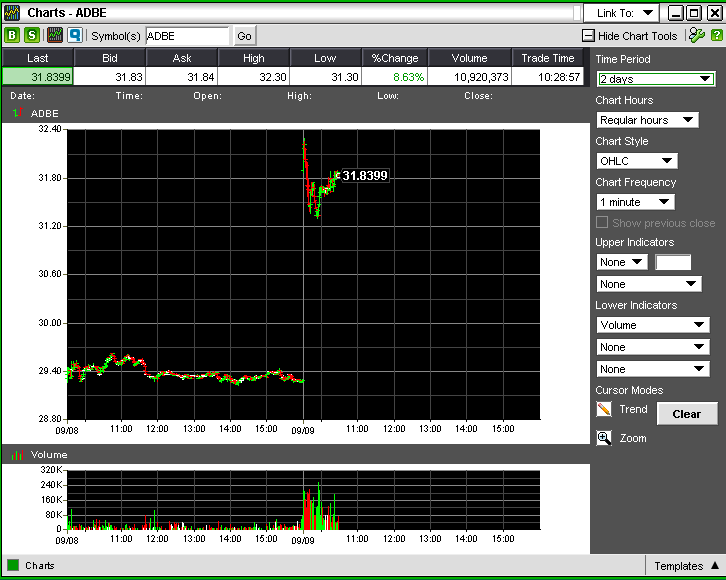 With the lifting of these restrictions, app developers can now develop using Flash Actionscript (and other technologies) and port their apps to run on Apple's iOS. Adobe had developed a component (called Packager for iPhone) that allowed the compiling step and this shipped with CS5. However, Adobe announced with the CS5 launch (when AAPL introduced new restrictions) that no further investment would be made on this product. Today's announcement reverses these restrictions and Adobe may now market and invest in the packager technology more aggressively again.

Larry Dignan is Editor in Chief of ZDNet and Editorial Director of TechRepublic.