Debugging standard code has never been a problem, but working with JavaScript has always presented problems. Visual Studio 2008 eases the burden with an enhanced debugger that simplifies the chore of taking a look at what your JavaScript is actually doing at runtime.

One of the more cumbersome development tasks is debugging client-side JavaScript code. Tools such as Firebug are helpful, but in the case of Firebug, you're forced to use Firefox. Thankfully, Visual Studio 2008 provides a robust and developer-friendly environment for debugging JavaScript.

With Visual Studio 2008 installed, there is one additional requirement for enabling JavaScript debugging: Internet Explorer must have script debugging enabled. This setting is available via the Tools | Internet Options menu within Internet Explorer. Once the Internet Options dialog box is open, select the Advanced tab and the Disable Script Debugging option is located in the Browsing section. It should not be checked so that it is enabled. Figure A shows the Disable Script Debugging option deselected. Figure A 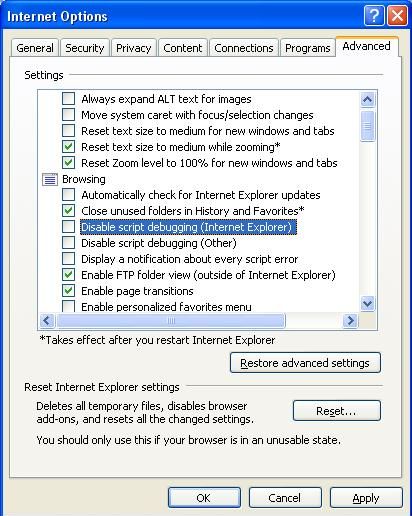 With debugging feature enabled in Internet Explorer, you can start debugging your JavaScript code.

The JavaScript debugger presents many standard debugging features. The following list provides a review of some of these features.

The Debug drop-down menu within Visual Studio 2008 provides a Windows submenu that allows you to define what windows to display while debugging. The examples in this article use Locals, Watch, Call Stack, and Immediate Window.

The most used feature during debugging is often breakpoints because you can use them to stop code execution and examine the state of variables and objects at that point in the script. Breakpoints provide a number of features (which are available via the Debug drop-down menu during a debugging session) for their use.

Code execution stops at each breakpoint -- unless it is a conditional breakpoint whose condition has not been met. Once the code is halted, you may choose to continue one line at a time or until the next breakpoint is encountered.

The debugger is actually enabled via the Debug menu in Visual Studio 2008. You go to Debug | Start to begin a debugging session or press [F5]. A picture is worth a thousand words, so let's take a closer look at actually using the debugger.

Figure B shows this page running in debug mode. A breakpoint has been set on the line that populates a local variable with the contents of a DIV tag on the page. The red circle to the left of the line lets you know that it is a breakpoint. The line of code waiting to run is highlighted in yellow. Figure B 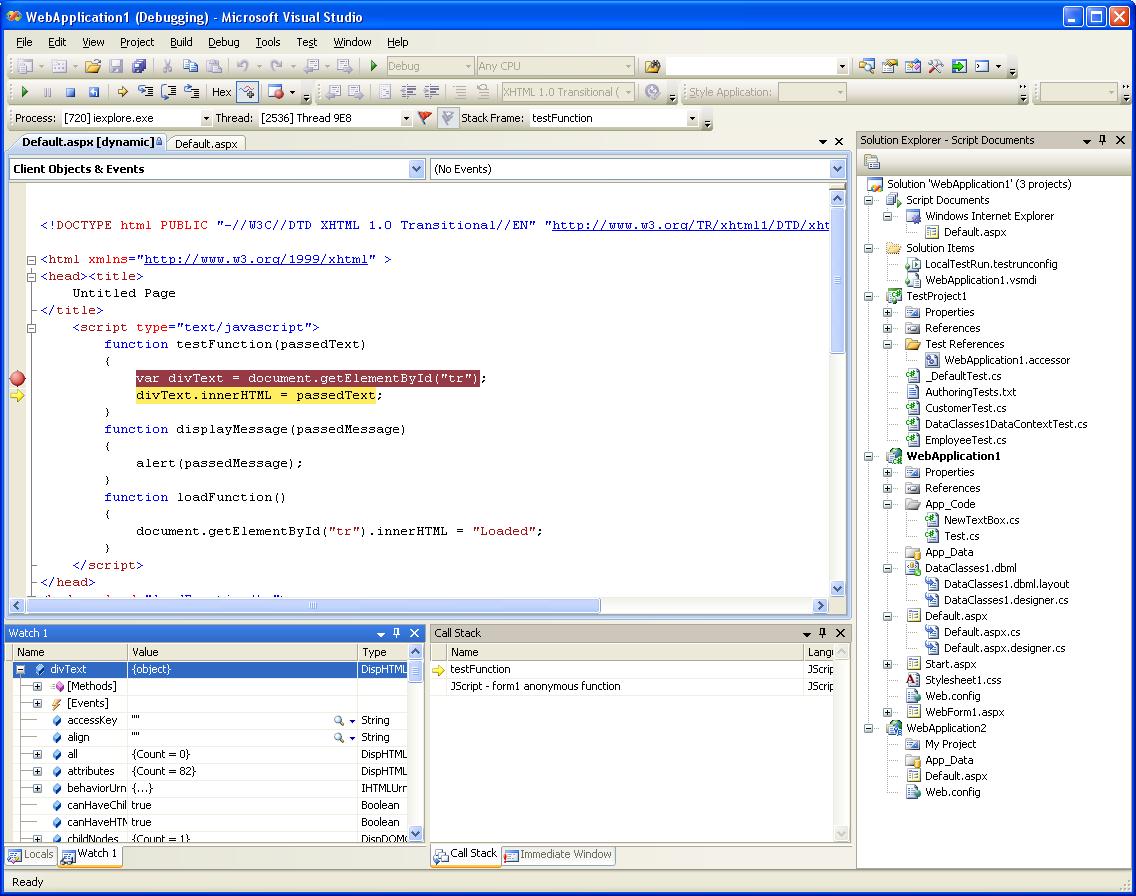 Figure B: Sample page opened for debugging in Visual Studio 2008

Also, a watch has been set on the divText variable, so the many properties associated with it are displayed in the Watch window at the bottom of the screen. Watches have been greatly enhanced in Visual Studio 2008 to include much more detail. You can now view runtime object's methods and events, as well as property and property type information.

A unique feature of JavaScript is its dynamic nature, whereas the code actually loaded in the browser when an application runs is often different than what is in the IDE. That is, the code is often generated as scripts may be stored as resources, loaded from other locations, or contained within other compiled controls.

The Script Documents feature of Visual Studio 2008 allows you to easily keep an eye on what is loaded and where it originated. While debugging, the Script Documents node will appear within the Solution Explorer pane. It will include the URL of each resource loaded into the page. It is visible in the upper right of Figure B.

Debugging is an essential aspect of every developer's job. Debugging standard code has never been a problem, but working with JavaScript has always presented problems. Visual Studio 2008 eases the burden with an enhanced debugger that simplifies the chore of taking a look at what your JavaScript is actually doing at runtime.

Tony Patton has worn many hats over his 15+ years in the IT industry while witnessing many technologies come and go. He currently focuses on .NET and Web Development while trying to grasp the many facets of supporting such technologies in a productio...