After using the Android Studio Early Access Preview for 48 hours, William J. Francis walks you through the install, some surprises he encountered, and more.

The latter really grabbed my attention. After having spent many years using Microsoft's Visual Studio, no matter how much I want to like Eclipse, I can't get there. I appreciate what Eclipse represents -- that is, a remarkably flexible IDE that runs on every modern operating system. Still, when I layer onto it all the tools I need to develop Android applications, it feels clunky at best, and many times slows down my productivity.

Android Studio is based on IntelliJ. Prior to Android I was a C/C++ guy, so I didn't know a lot about Java development tools going in. However, when I talked to my colleagues who were Java savvy, many of them swore by IntelliJ's IDE. I've stuck with Eclipse all these years simply because it was Google's recommended and official Android development environment. Now that there are two development options Google has endorsed, I spent the last 48 hours trying the Android Studio Early Access Preview.

I have Eclipse installed on a Windows 7 box, my MacBook Pro, and an Ubuntu PC. While I tend to bounce around between these machines when I'm doing Android development, I usually find the tools tend to behave better on the MacBook. So to give Android Studio the best chance at impressing me, I installed it on my Mac.

The installation process is exactly what you'd expect on an Apple OS. You download the DMG, double click it, and drag it to your Applications folder. When I first started doing Android development four years ago, installing Eclipse and configuring it for Android meant jumping through all sorts of hoops. You had to download Eclipse, the Android SDK, and the ADT. But in the last year, all that has changed. With the introduction of the ADT Bundle for Eclipse, the process is pretty much identical to that of the new Android Studio -- quick and painless. 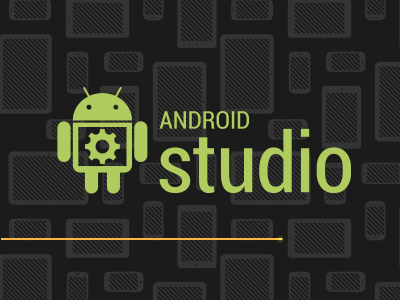 The IntelliJ Android Studio has a lot that will look familiar to anyone who has been doing Android development. The SDK manager, the AVD manager, the Process Monitor, DDMS, and ADB are all present and accounted for. You will also see some of the late additions to the Eclipse/Android offering, like the drag-and-drop layout manager and the integration of the icon asset tool in the new project wizard (Figure B). Figure B 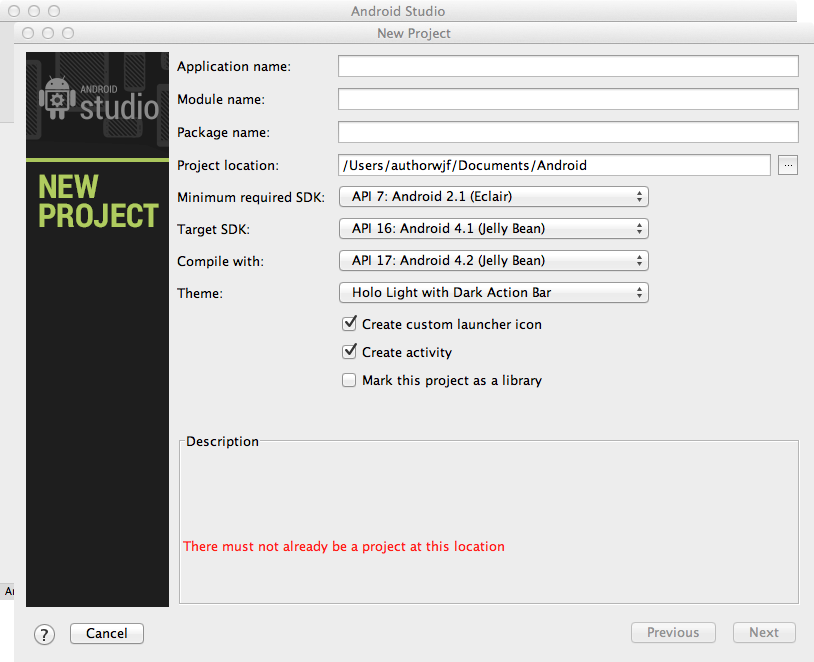 The new project structures, configuration files, and keyboard shortcuts will take some getting used to if you have been using Eclipse exclusively for your development efforts. When I started using Eclipse, it drove me bonkers that single stepping was done with F6 rather than F8. I'd been debugging with F8 in Microsoft's and Borland's tools since the early '90s. IntelliJ follows the F8 paradigm. But after four years I've finally gotten used to F6, and so over the weekend I was constantly trying to retrain my brain. Not that this is a big deal.  Like anything new, it just takes some getting used to.

One welcome surprise was that even though Eclipse and IntelliJ use different configuration files for projects, Android Studio was able to import my existing Android projects I'd done with Eclipse by recognizing the Android source files and building a new configuration around them. In fact, I tried importing several projects and all succeeded. I think this is a big win and will go a long way to encouraging adoption of Android Studio. 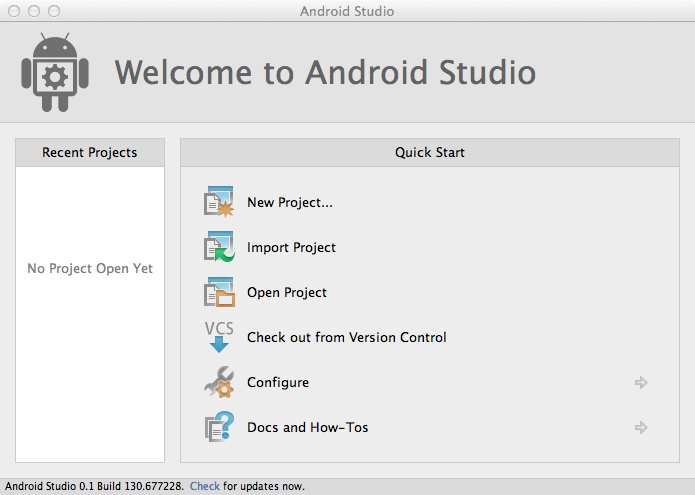 A not so pleasant surprise

My biggest complaint about Android Studio is a problem I ran into while trying to create a new project over the weekend while sitting at a coffee shop. I had not yet connected to the Internet, and to my surprise, I received an error message from the new project wizard (Figure D). Figure D 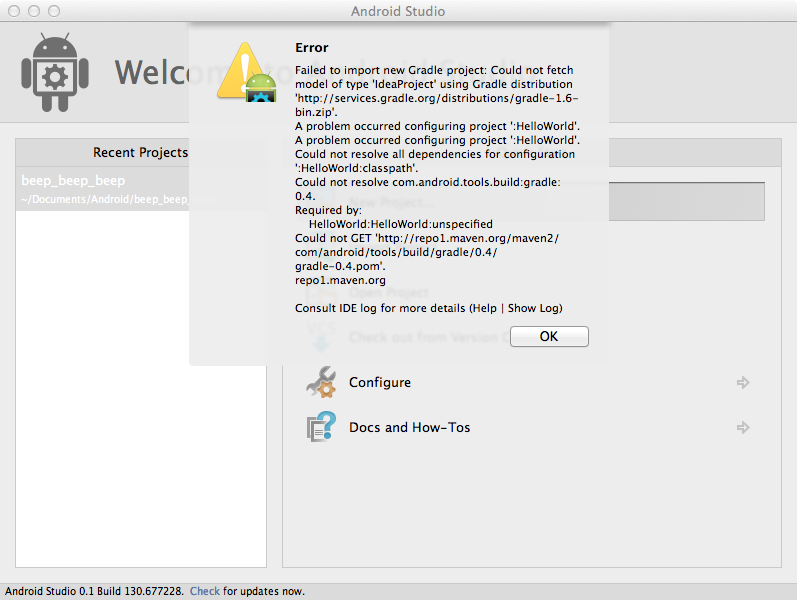 It seems creating a new project in Android Studio requires you to be online.

After I clicked OK, I was taken back to the landing page. After a bit of trial and error, it became apparent I could not create a new project without an Internet connection. Furthermore, each project I had tried to create and failed left some remnants in the workspace that had to be manually cleaned up.

As is evident by its Chromebook push, I realize Google believes everyone should be online all the time, but this is not yet reality. Whether the Internet connection requirement will change in the final release of Android Studio is yet to be seen. I will be keeping my fingers crossed.

While it is still an Early Access Preview, Android Studio looks very promising. It has a modern feel that Eclipse lacks, is generally more responsive, and integrates flawlessly with baked-in plugins like ADB and the SDK manager (Figure E). It's not perfect, but it feels like a major step in the right direction. Figure E 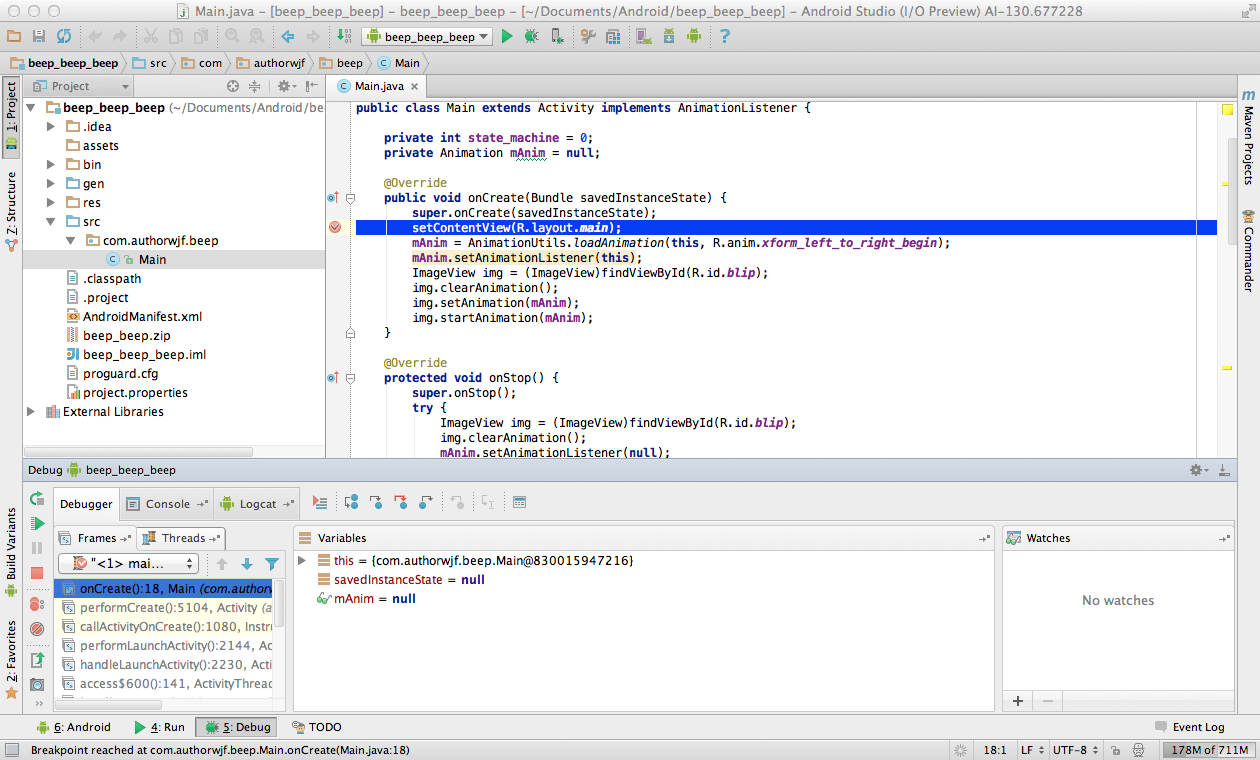 Debugging in the new studio has a modern look and feel.

When working with Android and Eclipse these past four years, I always felt like I was developing with a tool that had been adapted to work pretty well for something it was not originally purposed for. With Android Studio, it feels like a tool designed from the outset with Android development in mind. I know this is not the case, as IntelliJ was around long before Android. Still, give it a try, and I think you will see what I mean. Even in this early stage, it has a polish that is missing in its Eclipse counterpart.

William J Francis began programming computers at age eleven. Specializing in embedded and mobile platforms, he has more than 20 years of professional software engineering under his belt, including a four year stint in the US Army's Military Intellige...