Find out why Jack Wallen thinks you should use the built-in Android Task Manager tool on your tablet instead of any of the other third-party task managers.

With the more recent updates to the tablet flavor of Android, there's a vastly improved task manager just waiting for you to tackle the task of managing the applications installed on your device. Of course, when we say "task manager," what we're mostly concerned with is the ability to stop errant or unnecessary applications -- the Windows OS has taught us that lesson well.

The latest iterations of Android are able to handle much more than just killing tasks, but does the built-in tool stand up to the many third-party task managers available on the Android Market? This is the question I want to attempt to answer for you. It's a challenge, but I think in the end, we'll be able to draw a solid conclusion.

With the built-in task manager, you have the tools to handle the following tasks:

What the built-in task manager cannot do (that other, third-party tools can):

Here are the third-party task managers that I have tested and found to be remotely worth using (more on this in a moment):

Advanced Task Killer: This was probably the first of the task killers I tried. I used this for quite some time and found moderate success with the tool. ATK includes: Ignore list, one-tap widget, and auto kill. This manager is fairly simple to use -- simply select the tasks you want to kill (see Figure A), and then tap "KILL selected apps." Figure A 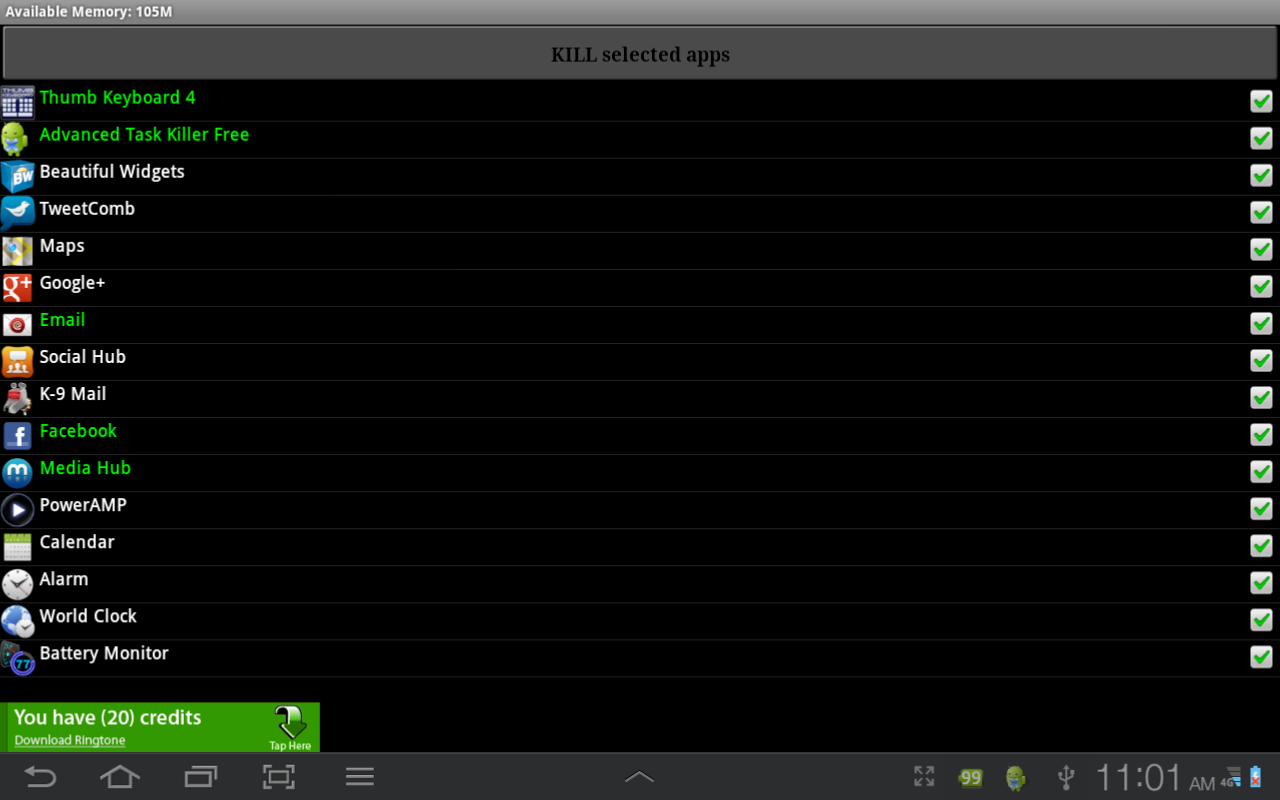 From the ATK Settings menu, you can also configure notification settings, ignore list, default click action, and much more.

Super Task Killer: This tool is a bit more simplistic than ATK, but it offers a cleaner interface (see Figure B). STK handles the following tasks fairly well: Killing running tasks and apps, scheduling the killing of tasks,  one-click task kill widget, and setting different security levels for apps or daemons. Figure B

Hit the refresh button (top left) after killing apps to see if they immediately reappear.

STK will remember apps you kill, and when they reappear in the list, they'll be auto-checked. You can then just click "Kill selected apps" again to kill them. Unfortunately, STK wasn't very proficient at successfully killing applications and keeping them out of the picture. 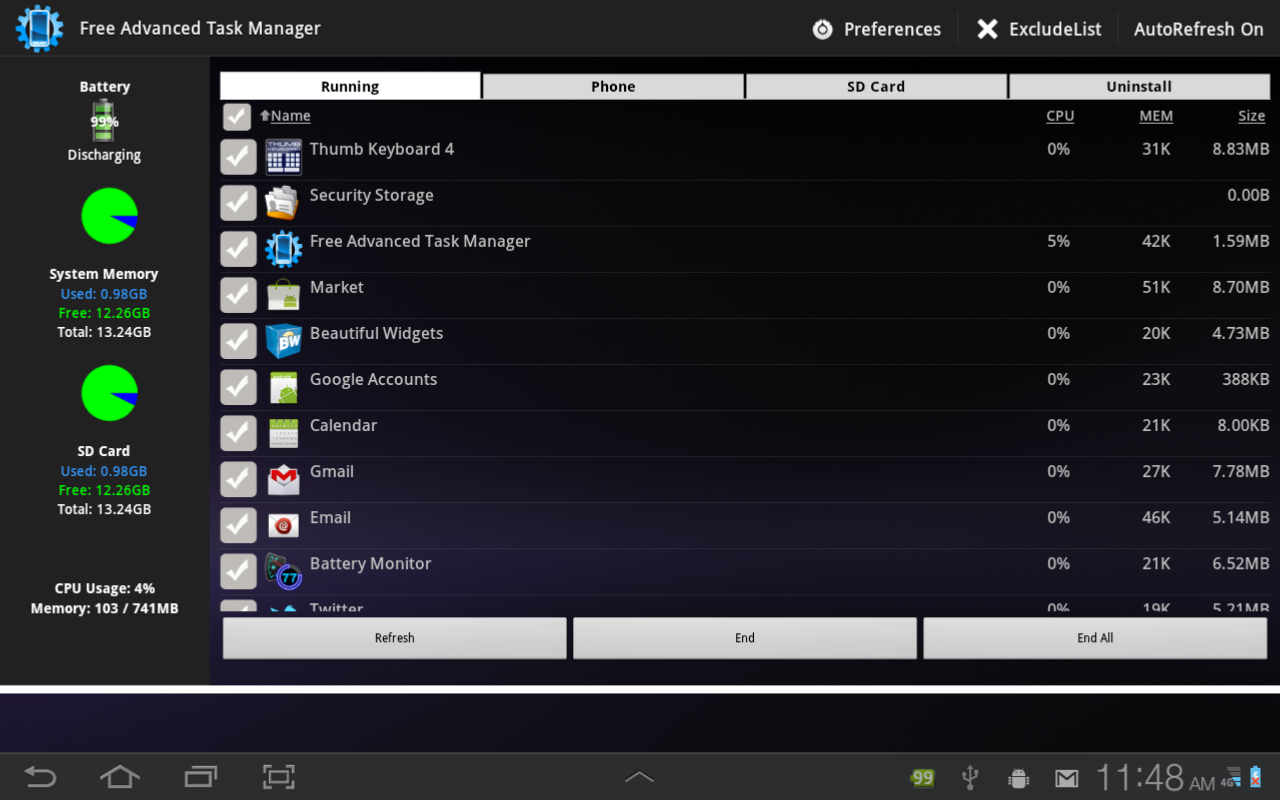 By default, FATM is set to auto refresh the dashboard, so you don't have to worry about refreshing.

There are two ways that FATM kills tasks:

You set this method up when you first run the application, but you can change the method in the Settings window.

The same applications that STK couldn't keep closed, FATM had no problems with -- but there are still issues at hand. For instance, FATM itself takes up anywhere between 4-7% CPU, approximately 37k memory, and is 1.59 MB in size. This is a common theme among all of the third-party task managers.

What about the built-in tool? How does it stack up? When compared to the third-party applications listed above, the built-in Android Task Manager works like a champ. Not only does it more cleanly (and effectively) close running applications and services, it offers an easy to use pop-up app that can be opened from the pop-up panel (see Figure D). Figure D 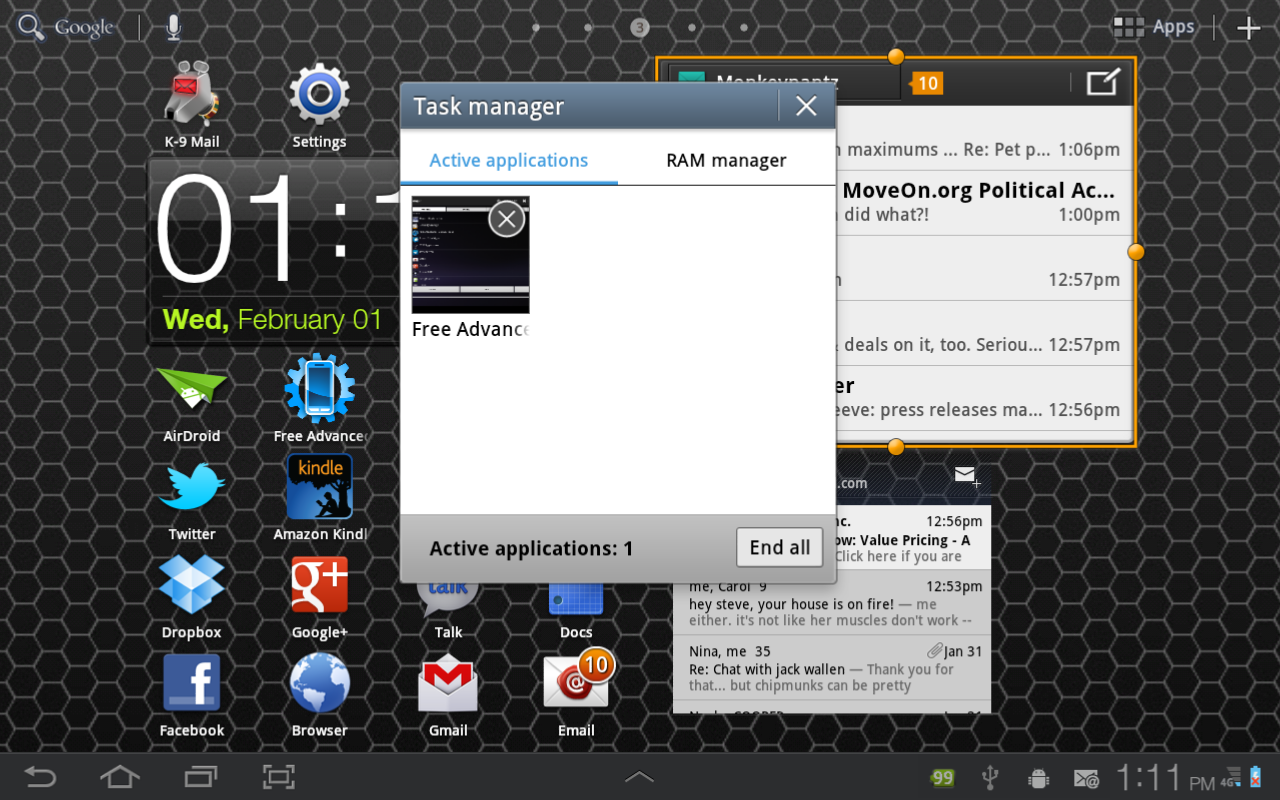 Tap the up arrow on the panel to reveal the Task Manager icon., and then tap that icon to open up the tool.

To kill an application from the pop up, just tap the X associated with the running application. If there are multiple running apps, tap the "End all" button.

To get more from your task manager, go to the Setting window (open the Apps drawer, and then tap Settings). From Settings, go to Applications. Here, you can tap Manage Applications to work with Downloaded, All, and Running applications. To close an application from this window (see Figure E), scroll through to find the running application in question, tap that application listing, and tap the "Force Stop" button. The application will close. Figure E

Scroll all the way down to the bottom of the app listing to see all of the permissions the application requires - a nice touch.

You will also notice a couple of other usable buttons:

Over the last few years of using the Android platform, I've had to rely on a task manager or two to keep the platform running with any semblance of battery life or responsiveness. Things have obviously changed quite a lot over the last year. The most recent releases of the platform have come a long way and do not depend upon these tools. In fact, Android has finally reached the point where the built-in task manager works far better than any of the third-party tools.

So, if you ask me whether or not you should give a third-party task manager a try, I'd say "No, use the built-in tool first." Of course, you may consider using a third-party tool if you need the ability to schedule the killing of tasks or perform blacklist/whitelisting, but even those have limited usefulness. Frankly, if you have an application you need to blacklist, you should probably just uninstall that application the device.