Here are 10 of the worst transgressions for any geek. Doing any one of these will put your geek credentials at risk. Do two of them and your geek card immediately gets revoked.

TechRepublic has previously talked about some of the things you can do to increase your geek cred. Naturally, there are also some things that can hurt your geek cred. In fact, we've put together a list of 10 of the worst transgressions for any geek. Doing any one of these will put your geek credentials at risk. Do two of them and your geek card immediately gets revoked.

You can view our list in two forms. You'll find the simple list below, or you can check it out in slideshow format with the accompanying visuals. 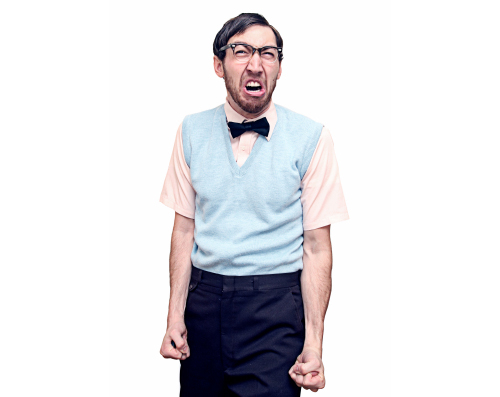 Sure, it's convenient for buying music and media in one place and syncing it to an iPod or iPhone, but iTunes has a draconian DRM system (still in place for media), makes it difficult to manage your library on multiple systems, and it started out as one of the worst pieces of bloatware ever built. And, it hasn't gotten much better.

9. Not knowing the difference between binary and hexadecimal

Binary is the basis of all computing and is simply composed of zeros and ones. Hexadecimal is a 16-digit numeric system -- based on numbers 0-9 and letters A-F -- that represents binary in a more friendly way. Know the difference.

8. Not knowing what MMORPG stands for

Even if you don't play games (or rarely play) you should know that an MMORPG is a "massively multiplayer online role-playing game," also known as the alternate reality for geeks. The biggest one is World of Warcraft (WoW), a cultural phenomenon with over 12 million subscribers.

7. Loving your cable or telecom company

6. Not knowing the name of the book that Blade Runner was based on

Blade Runner is one of the greatest sci-fi movies of all time. If you're a true geek, you've seen it multiple times. But, not only that, you also know that it's based on Philip K. Dick's "Do Androids Dream of Electric Sheep?" which is one of the best-titled stories in all of literature and an absolute classic in science fiction.

If someone mentions a Wookie and a Klingon and you're not sure which one was part of the Star Wars universe and which one belongs to the Star Trek milieu, you are definitely not a geek.

4. Believing the "free" in open source refers to price

Repeat after me, "Open source does not mean it doesn't cost anything." Sure, some open source software is freely available to download at no cost. But, that's not a requirement of open source. There is plenty of open source software that requires a fee. When open source talks about "free" software, they are referring to "free" as in "freedom." It is freedom from overreaching licensing agreements. You'll also hear this concept referred to as "Gratis verses Libre."

Look, Facebook is lucky the entire geekosphere hasn't dropped it like a bad habit after all of the crap they've pulled in changing and violating their own lackluster privacy policies. Leo Laporte nearly led a geek revolt out of Facebook in May 2010. The only thing that prevented it was lack of a viable alternative.

2. Taking something into Geek Squad to get fixed

Best Buy's Geek Squad has a few legitimate geeks on staff; however, too many of their technicians are completely clueless and can do more harm than good to your equipment. Besides, if you're geek, just geek-up, open up the case, and fix it yourself. (Exception: It's acceptable to go to the Geek Squad counter to exchange a DOA device that is still under warranty. Just don't let us catch you asking for advice.)

In 1999, if you wanted to quickly learn more about HTML or Exchange 5.5 or Apache or how to earn CCNA certification, you'd typically make a quick trip to your nearest book superstore like Barnes & Noble or Borders and comb through the huge selection of computer books. However, this is 2010. Any computer book you find at a bookstore is at least six months out of date. Almost everything you need to know is available on the web for free or in ebook format that you can quickly download to your laptop or tablet. Buying a dead-tree tome about a new technology is an immediate tip-off that your geek credentials are in question.