I have said that the Apple iPad is only good at two things but that it's really good at those two things. I've compiled a list of my 20 favorite apps for taking advantage of the iPad's strengths.

I have said that the Apple iPad is only good at two things, but it's really good at those two things and I've compiled a list of my 20 favorite apps for taking advantage of the iPad's strengths.

The best way to view this is the gallery of screenshots. However, you can also view it as a text-based list below. 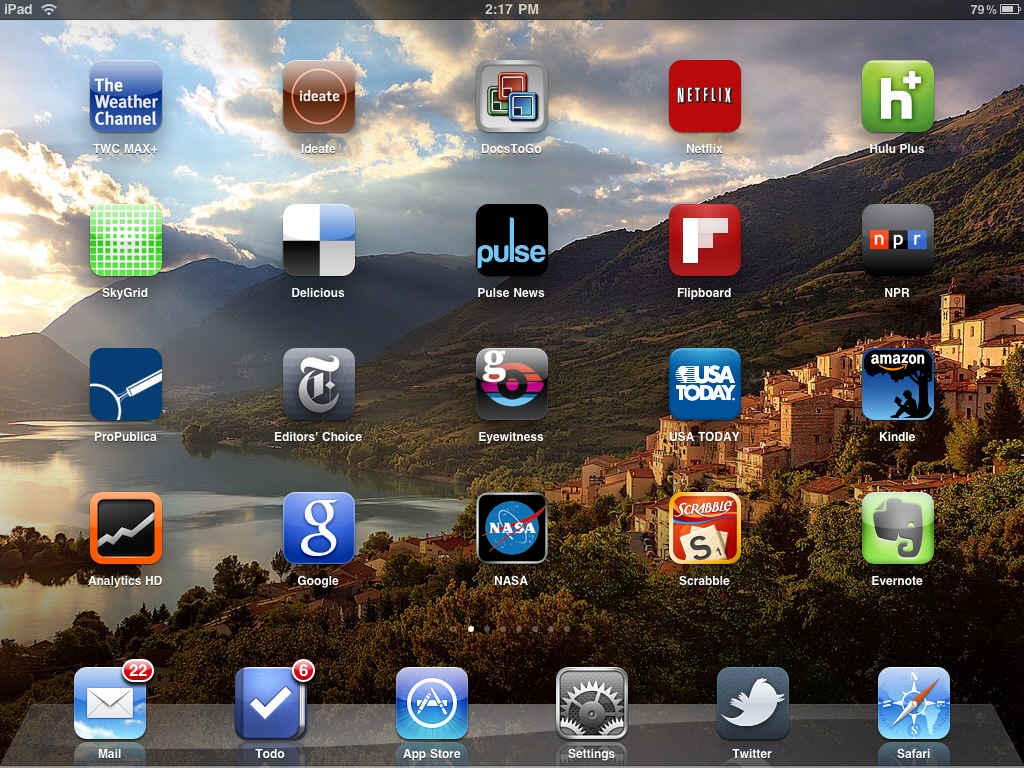 It's amazing how quickly this has become my most used app on the iPad, since it was just released in July. It displays news stories based on them being shared via Twitter or Facebook and auto-formats them in a newspaper-like column format. You can scan the headlines and first couple paragraphs and then click through to the site to the open the full story right in the built-in web browser in the app. (Tip: search for TechRepublic or Jason Hiner and you can set us up as one of your sections in Flipboard.)

The best way to read books on the iPad is the Amazon Kindle app, mostly because it has a large selection of titles available and it does the best job of syncing between multiple devices -- iPad, iPhone, Android phone, PC, Mac, and more.

The best way to collect, manage, and read business documents on the iPad is with Dataviz Documents to Go, which not only allows you to sync local files from your computer but also connect to cloud services such as Google Docs, Dropbox, Box.net, SugarSync, and iDisk.

There are tons of different "to do list" managers for the iPad, but the one I prefer is ToDo. The UI makes it look like an old day-planner and it can do online sync with the Toodledo service.

Twitter's official iPad app is the best way to access Twitter and is an example of the kind of imaginative new UIs that good developers will attempt once they get grounded in touch-based tablets like the iPad. Check out the way the Twitter app exposes more or less info by sliding left and right. (Other useful Twitter apps include Osfoora, Twitterific, and Tweetdeck.)

One of the great ways to take advantage of the iPad as a viewer is to use it for quick glances at business dashboard metrics (see QlikView, SBO Explorer, and Roambi). This even translates to the simple task of checking traffic metrics and user info for your website. If you use Google Analytics, the Analytics HD app is a great way to view site data from the iPad.

The iPad is a surprisingly good note taker. The keyboard is about 80% as good as a laptop keyboard but the convenience of a more portable device is valuable as well. Evernote is a great note taking companion for the iPad, since it can auto-sync your meeting notes back to your PCs and/or smartphones. Just keep in mind that it's an online service and so be careful that you don't use it for any business-sensitive data. For that stuff, you can use locally-controlled files with Apple's built-in Notes app, for example.

Pulse is another iPad news aggregator like Flipboard, only instead of building its sections based on social feeds it uses RSS feeds. Like Flipboard, it presents the info in a visually-compelling format using images from the articles that it is linking to. You can use the RSS feeds for TechRepublic and/or Tech Sanity Check if you'd like to use Pulse to keep up with the latest posts.

Another great news aggregator for the iPad is SkyGrid, but its specialty is pulling together news on hot trends in real time. It's not nearly as visual as Flipboard or Pulse, but SkyGrid helps fill in the gaps by surfacing hot news that might have been missed by your favorite RSS sources and your social network.

ProPublica, a non-profit publication of investigative reporters, is doing some of the most important work in journalism today -- the work that has increasingly been cut out of the profit-driven newsrooms. Plus, they have an excellent iPad app. The three column layout gives you the latest stories from ProPublica (most of which don't make the mainstream news), the middle column links to good investigative news pieces from the mainstream media (many of the stories are buried), and the third columns has ProPublica's "Projects" or groups of stories where you can stay up to date on on-going issues such as the Gulf oil spill. Keep in mind that ProPublica is non-profit and funded completely by donations.

Another one of the best iPad news apps from a media organization is the NPR app. It lets you quickly skim top stories, read related text articles, and quickly add stories to a playlist that you can then listen to all at once.

The Times offers a selection of its top 10-12 stories in six different sections (news, business, technology, opinion, arts, and features). It has a very clean UI that maintains the look of the traditional newspaper and includes a mix of stories from Times reporters along with wire feeds from the A.P. and Reuters.

While The New York Times only gives you a selection of top stories, the USA Today offers virtually all of its stories in digital format on the iPad, and in a layout that reflects the newspaper's design but is also optimized for a digital experience on the iPad. Plus, the company recently restructured to put greater emphasis on digital content and devices such as the iPad, so we should expect more of USA Today's best content, graphics, and photos to make their way into the iPad app.

A real diamond in the rough among iPad apps is The Guardian Eyewitness, which features amazing world news photography from the popular UK newspaper. Another great world news photo app is The Big Picture from Boston.com.

Unlike the iPhone, the iPad does not come with a built-in weather app. However, The Weather Channel has filled the void with an excellent app that takes advantage of the tablet interface. I've never been a big fan of The Weather Channel's desktop PC widgets, but they've done a great job with the iPad app.

Let's face it, most of us geeks love space. The iPad itself was, in part, inspired by science fiction such as Star Trek. NASA has a strong tradition of sharing its space exploration advances and research and they've continued that tradition in multi-touch style with an excellent iPad app that lets you explore photography from satellites, see NASA's launch schedules, research historical information about missions, and watch NASA TV live.

I'm a big Netflix nerd. I use it a lot for watching documentaries and old TV series (like Star Trek: Voyager and the IT Crowd), so I'm thrilled that there's an iPad app. It lets me watch movies and shows (on-demand) when I'm traveling instead of getting gouged by the pay-per-view fees in hotels. As I said in my article, The truth about iPad: It's only good for two things, I'm not crazy about watching video on the iPad but Netflix is causing me to warm up to it as it makes more and more content available for streaming. My only complaint about the Netflix app is that it doesn't have iPad-specific functionality for queue management. It just takes you to the standard Netflix website and the drag-and-drop functionality in queue management doesn't work very well because the AJAX code is meant to work with a mouse. (Keep in mind that this app requires a Netflix subscription.)

Like Netflix, Hulu can stream video content from the major studios to your iPad. While Netflix leans more toward movies, Hulu leans more toward TV shows. The two have some overlapping content, but not a lot. You need a Hulu Plus membership ($9.99/month) to get the content, which includes a lot more back titles and not just the most current stuff, which you can get for free at Hulu.com (although it won't work on iPad because it uses Flash).

This famous iPad/iPhone game (now available on Android as well) is highly addictive, even if it is silly and vapid. I'm not going to try to explain it here if you don't know anything about it, just know that it's a very simple game to play but actually involves some minimal strategy that makes it pretty fun. I don't play it that much, but I definitely use it to distract my four year old for up to 20-30 minutes at a time. She's now better at it than anyone in the family.

I've been a Scrabble fan for a long time but hadn't pulled out a board in a while when the game suddenly saw a revival in recent years in digital form, including several knock-offs such as Words with Friends. My favorite way to play digital Scrabble is the Pass'n Play mode on iPad. But the iPad also has an individual learning mode, a local network mode, Party Play (where you can use an iPhone or iPod Touch as a tile rack), and a mode where you can play against a Facebook friend.