BackBlaze has revealed how it builds 67TB storage arrays for under $8000. IT departments can use this blueprint to save big money on storage systems.

Online storage provider Backblaze has opened up its kimono and offered detailed specs on how it builds high-density 67TB storage arrays for less than $8000 each. For IT departments willing to follow the Backblaze formula, they can get massive storage systems for a fraction of what they'd pay Dell, EMC, Netapp, or Amazon AWS for the same amount of storage (see chart below). 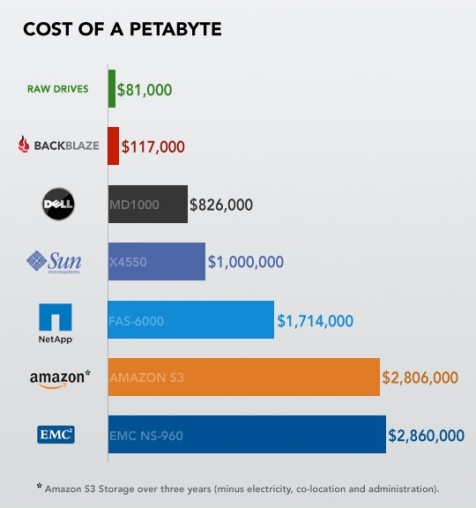 The secret to the Backblaze formula is that it uses a custom case, off-the-shelf hardware parts, and open source software. In a blog post on its site, the company provides a complete parts lists, diagrams that show exactly how to build one of its "Red Pods," and details of the software used to make it run. The 3D diagram below shows what a Red Pod looks click. Click play to watch the 19-second animation.

Backblaze made this revelation in order to show how it can offer reliable service at such a cheap price ($5/month for unlimited storage). While this blueprint can help IT departments build their own high-density storage arrays, it's doubtful that it will cannibalize any of Backblaze's business, since Backblaze is aimed mostly at making backup-to-the-cloud easy for home users and small businesses.

Thus, this is mostly just a publicity stunt by Backblaze. However, I have to admit that it's a really good one. It can offer some real value to IT departments and create a positive brand impression of Backblaze with IT pros, who tend to serve as the personal tech support department for all of their friends, family, and neighbors, and that often includes recommending services such as backup.

I'll admit that when I get asked about online backup providers by small businesses and individuals, the first two I tend to think of are Mozy and Carbonite. With the Red Pod, Backblaze has now shown up on the radar.