File this in the "Everything old is new again" folder. Today, IBM is announcing plans to consolidate about 4,000 small servers in six locations worldwide into 30 Linux-powered mainframes that are each about the size of a refrigerator. IBM says that this move will save $250 million over five years, reduce floor space for these servers by 85 percent, and save roughly enough energy to power a small town.

"The mainframe is the single most powerful instrument to drive better economics and energy conservation at the data center today," said James Stallings, general manager of IBM's System z mainframe platform [see photo below]. "By moving globally onto the mainframe platform, IBM is creating a technology platform that saves energy while positioning our IT assets for flexibility and growth." 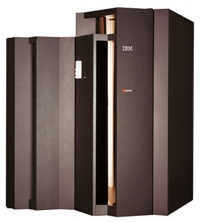 "As one of the world’s largest technology providers, IBM consistently assesses how our systems can be maximized to support our employees and clients," said IBM CIO Mark Hennessy. "A global account consolidation truly demonstrates that IBM is committed to driving stronger energy and technology optimization, and cost savings."

The 4,000 servers that IBM will replace by making this change will be recycled by IBM Global Asset Recovery Services.

IBM is showing the world that it's willing to eat its own dog food. The company has been trying to pitch IT departments worldwide on the concept of migrating away from the distributed server model that has dominated enterprises since the mid-1990s and moving to a mainframe-powered data center where IT can consolidate on big servers for big tasks and use virtualization to achieve the same nimbleness and flexibility for small tasks. Plus, IBM claims that the mainframes increase performance, are easier to manage, are better on energy, and save money over the long haul.

This won't be a tough sell for many enterprise IT departments, especially the following:

However, the big question is whether IBM will be able to price some of the z series mainframes appropriately for small and mid-market IT departments, where most of the IT growth is right now. If they can, this type of mainframe consolidation could turn into an important trend.