Microsoft's Bill Gates and Apple's Steve Jobs will make a rare joint appearance tonight at the fifth annual D: All Things Digital conference (D5) in San Diego. The appearance is supposed to be an "unrehearsed and unscripted" 75-minute interview with Walt Mossberg and Kara Swisher in which Gates and Jobs "discuss the history and future of the digital revolution," according to The Wall Street Journal, which hosts D5. However, Jobs and Gates rarely do anything unscripted, so there is lots of speculation about what they might announce -- either jointly or separately -- during this appearance.

Jobs and Gates, together again

Jobs and Gates have attended the D: All Things Digital conference in the past. The photo below shows them having dinner together at the conference in 2005. However, today will be the first time that they have shared the stage at the event.

The two have not shared a stage since the famous 1997 Macworld keynote when Jobs, who had just returned to Apple, announced a deal with Microsoft as Gates appeared via teleconference on the huge screen behind him (see photo below). The image of that encounter also played a prominent role in the movie Pirates of Silicon Valley, which chronicled the rise and rivalry of Jobs and Gates. 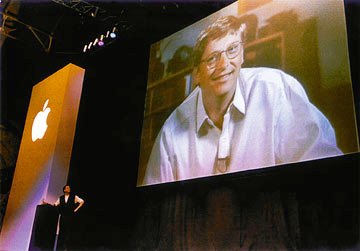 What's up their respective sleeves?

ZDNet's Mary Jo Foley has reported that today Gates might officially unveil Microsoft's multi-touch interface, known as the Milan Project and previously known as "PlayTable." Of course, Apple also has a prominent touch-based interface that is coming next month with the release of its highly-anticipated iPhone, and the iPhone is expected to be a central talking point for Jobs.

There's also a new rumor about the iPhone shipping with more features than originally expected, as blogger Jason O'Grady has noted. If there's a grain of truth to any of these surprise features being added to the iPhone, then that could potentially be a bomb that Jobs might drop today.

The other scenario would be some type of joint announcement that has been cooked up by the two companies behind the scenes, possibly even without Mossberg's knowledge. After all, this joint appearance has apparently been the works since February, as SlashGear reported at the time, so there has been plenty of time for PR wonks to engineer something interesting.

Here is a video clip from MarketWatch that sets the scene for tonight's "historic" interview:

We also have a fun gallery of photos of Gates and Jobs together:

Clearly, all of this is just speculation -- albeit fun speculation. None of it could play out. That being said, I don't expect the joint appearance of Jobs and Gates at D5 to merely involve banter about the future of the digital revolution. They know that their joint appearance is a golden opportunity to create some serious buzz among the mucky mucks and both will want to use this appearance to their advantage.

The time slot for the interview has not been made public, but Kara Swisher wrote in her blog that it will be in the evening. Swisher has also posted a tongue-in-cheek video in which she interviews some of the early arrivals at D5 and asks them what questions they would ask Jobs or Gates.

What questions would you ask Gates or Jobs? What do you think they are most likely to talk about? Is all of this speculation nauseating or just good fun? Join the discussion.